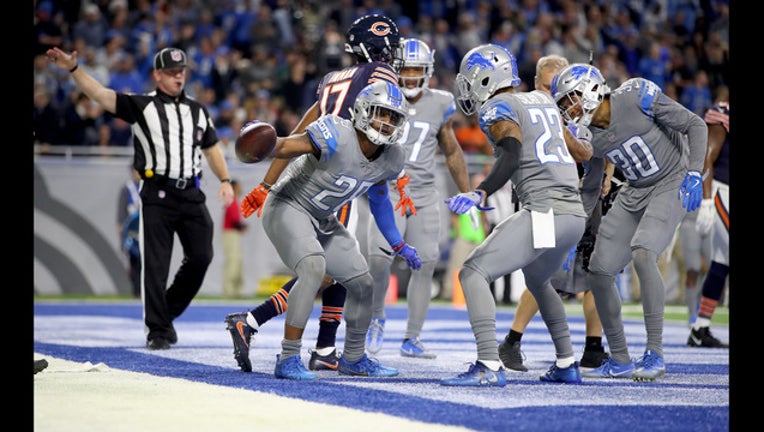 DETROIT (AP) - The Detroit Lions could enjoy the rest of their weekend, knowing their playoff hopes were still very much intact after a victory over Chicago on Saturday.

On Sunday, however, the scores from around the league gave the Lions little reason for excitement.

Victories by Carolina and New Orleans (10-4) left the Lions two games behind those NFC South teams for a wild-card spot with two to play - and the Panthers and Saints both beat Detroit earlier in the season.

The Lions (8-6) are only a half-game behind the Atlanta Falcons for the last wild-card spot in the NFC, but Detroit has a head-to-head loss to them too.

"You can't look back," receiver Golden Tate said after the win over Chicago. "We just got to go out and get the next one, control what we can control."

Detroit's schedule down the stretch has been manageable, and the Lions took advantage Saturday in their 20-10 victory over Chicago. Detroit is at Cincinnati (5-9) next weekend before hosting Green Bay to end the regular season.

The Lions did pull even with Seattle (8-6) on Sunday when the Seahawks were routed 42-7 by the Rams, but even after that game, Detroit had only a 21 percent chance to make the postseason, according to fivethirtyeight.com. If the Lions win their final two games, their chance of making it would be around 50 percent.

As much as the Lions try to keep their focus on their remaining games, it's hard not to ponder what might have been.

Detroit's loss to Atlanta in September stings in particular. The Lions had a last-second touchdown overturned after a review and lost that game 30-26 .

The Falcons do have to play both Carolina and New Orleans in the final two weeks of the regular season, but first Atlanta has a good chance to add another win at Tampa Bay on Monday night.

For the Lions, meanwhile, winning out is no sure thing. Matthew Stafford had another efficient game Saturday, going 25 of 33 for 237 yards and two touchdowns. He's completed 80.2 percent of his passes over the past three games, but the problems that have held the offense back haven't really been solved.

The Lions rushed for under 100 yards as a team against the Bears, and Stafford was sacked four times. Travis Swanson and Rick Wagner, two starters on the offensive line, were inactive.

Detroit was able to overcome those issues against Chicago. Although the Lions were outgained, they had only one turnover and forced three.

That was enough to beat the last-place Bears, but what Detroit can't do is change the past - the key games the Lions lost earlier in the season against teams that are now standing between them and a playoff berth.