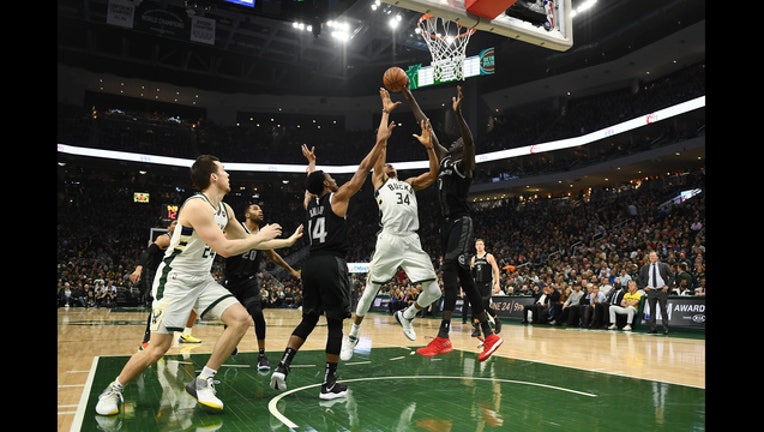 MILWAUKEE, WISCONSIN - APRIL 17: Thon Maker #7 of the Detroit Pistons blocks a shot by Giannis Antetokounmpo #34 of the Milwaukee Bucks during Game Two of the first round. (Photo by Stacy Revere/Getty Images)

MILWAUKEE (AP) - Saddled with early foul trouble and faced with an aggressive defensive scheme that kept him in check for the first two quarters, Giannis Antetokounmpo set the tone immediately in the second half.

Antetokounmpo scored 13 of his 26 points in Milwaukee's big third quarter and the Bucks beat the Detroit Pistons 120-99 on Wednesday night to take a 2-0 lead in the first-round playoff series.

After scoring 10 points and playing only 14 minutes in the first half, Antetokounmpo scored Milwaukee's first seven points in the third quarter.

"It is about will," Antetokounmpo said. "I knew they were going to put guys in the paint, crowd me. I just tried to have patience."

As the Bucks took the court after halftime, Eric Bledsoe had some words of advice for the team's leader.

"Eric told me, 'Be aggressive, it is going to come.' That is what I tried to do," Antetokounmpo said.

"I don't think he felt great about how he played in the first half," Bucks coach Mike Budenholzer said about Antetokounmpo. "When he feels that way, he's going to do something to change it."

Bledsoe led the Bucks with 27 points, and Khris Middleton had 24. Milwaukee is trying to win a series for the first time since 2001.

"We knew they was going to come out with fight," Bledsoe said. "We just had to match their intensity."

Luke Kennard had 19 points for Detroit. Reggie Jackson and Andre Drummond each added 18, and Drummond had 16 rebounds. Detroit star Blake Griffin sat out again with a left knee injury, but received a technical for the second straight game for arguing from the bench.

"For the most part, we came out and competed and we definitely made them feel us," Jackson said.

Game 3 is Saturday night in Detroit.

Detroit clawed within seven in the fourth before the Bucks put it away, capped by a hard drive by Antetokounmpo on a break. He banked in an awkward reverse-angle shot while crashing to the floor after being fouled by Drummond. He completed the three-point play to make it 105-87.

After falling behind early, Detroit battled back in the second quarter, finally taking a 57-56 lead on Jackson's jumper with 28 seconds left. Bledsoe briefly put the Bucks back in front, but Jackson closed the half with a layup to give Detroit a 59-58 lead.

"I thought we set the tone in the second quarter," Detroit coach Dwane Casey said. "Our challenge has been extending hard play, not getting bored with fundamentals, not getting bored kicking the ball out, doing those things offensively."

Pistons: Griffin took part in light drills at the morning's shootaround while wearing a heavy brace on his leg. ... Thon Maker, acquired from Milwaukee near the trading deadline, started in Griffin's place for the second straight game. ... Detroit committed two turnovers in the first half.

Antetokounmpo made a 3-pointer as part of his personal 7-0 run to start the third quarter.

"I have been working on it a lot," he said. "It is a part of my game now. That one went in and we were able to make a run. I know they are going to give me those shots the whole game. I've just got to be able to be mentally prepared and get to my rhythm and take those shots."

After Luke Kennard scored 21 points off the bench in Game 1, Casey inserted into the starting lineup.

"Starting or coming off the bench, either way is fine with me," Kennard said. "We wanted to create a little bit more space on offense. I thought we did that and got some good looks."