The FIFA World Cup is the biggest men's soccer tournament in the world. Here's a look at the eight countries that have won the World Cup since the tournament was first held in 1930.

COLUMBUS, Ohio - Antonee Robinson somersaulted a struggling United States into a strong position in World Cup qualifying, just like he did in September.

And when he broke through the freeze in the air and the offense, he celebrated with not a single handstand but a double.

"We’re definitely one step closer," Robinson said after his 52nd-minute goal lifted the U.S. over El Salvador 1-0 on Thursday night to keep the Americans on track for a World Cup return. "It wasn’t the prettiest game."

But his goal celebration on a 29-degree night was a showpiece worthy of a gymnast: a forward flip into a backward spring.

"It's just one of those muscle-memory things. I've been doing it since I was a kid," he said.

Robinson followed by grabbing his hamstring and then feigned a stiff-legged walk.

"He kind of scared me because I thought he pulled his hammy," Tim Weah said.

No worries. Robinson was mimicking a Kenyan player he saw while playing for Everton's youth team as a teenager in Africa.

"My friend's been on me for weeks to do that celebration, so I had to pull it out," Robinson said. "Didn't tell anyone, so there were a few people scared. It's all part of the fun of enjoying the game."

The U.S. has 18 points with five qualifiers left, one point behind Canada. Mexico has 17, followed by Panama (14), Costa Rica (12), Jamaica (seven), El Salvador (six) and Honduras (three). The top three nations qualify from North and Central America and the Caribbean, and the fourth-place team advances to a playoff against the Oceania champion, likely New Zealand.

The U.S. is at Canada on Sunday and hosts Honduras on Wednesday at St. Paul, Minnesota. Qualifying ends in March with trips to Mexico and Costa Rica around a matchup with Panama in Orlando, Florida.

"We're one step closer to our goal," Robinson said.

His nickname is Jedi — it dates to his love for "Star Wars" as a 5-year-old and isn't related to the celebration.

Robinson scored after Weston McKennie played a long ball down the right flank to Weah, who let it bounce three times as he ran past Roberto Domínguez and Eduardo Vigil.

Goalkeeper Mario González made a sliding block on Weah, and the ball rebounded to Jesús Ferreira, a surprise starter in place of Ricardo Pepi. Ferreira headed the ball across the goalmouth and Christian Pulisic let the it bounce past him to Robinson, who kicked it in with his left foot from 8 yards for his second international goal.

His tying 42nd-minute goal at Honduras sparked the U.S. to a 4-1 win last September.

"We call our fullbacks our superpower," coach Gregg Berhalter said. "We put an emphasis on our fullbacks arriving in the penalty box."

The Americans outshot El Salvador 17-6 and had 62% possession but the offense followed its pattern, scoring 11 of its 13 goals in the second half. The U.S. has won 15 straight over El Salvador at home.

"We lacked connection in our pressing," Berhalter said. "The ambition to play forward and get behind them was missing for the 90 minutes. We had it in spurts." 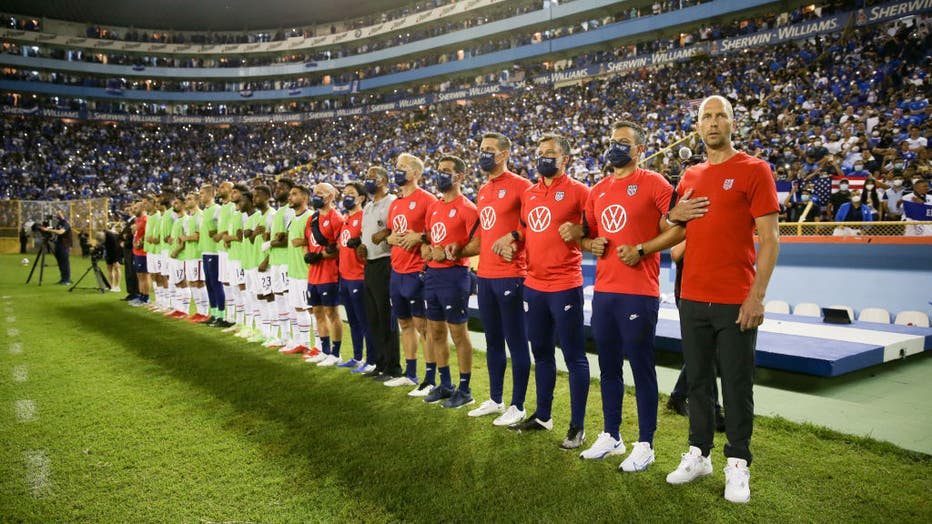 Gregg Berhalter USMNT head coach with his bench during a game between El Salvador and USMNT at Estadio Cuscatlán on Sept. 2, 2021, in San Salvador, El Salvador. (Photo by John Dorton/ISI Photos/Getty Images)

Matt Turner took over in goal from Zack Steffen, who remained in England because of a bad back. Turner, on the verge of leaving New England for the Premier League, didn’t have to make a save.

"Undrafted out of college and now he’s playing with the national team and he’s headed to Arsenal. It’s just an amazing, amazing story, and it’s all down to him and his work ethic and his belief in himself and his never-give-up attitude," Berhalter said. "He was calm in all situations, wasn’t tested much but was there when we needed him. And he looked like a player that’s going to Arsenal, for sure."

The U.S. Soccer Federation scheduled the match in a cold climate to minimize travel and put the chill on El Salvador, which went to a sporting goods store to purchase additional winter gear.

Snow flurries fell during warmups and the temperature was the same as for the "Guerra Fria" win over Mexico at old Columbus Crew Stadium in February 2001 and the Snow Clasico victory over Costa Rica at Commerce City, Colorado, in March 2013.

U.S. players has electric heated cushions on the bench and refreshments of chicken broth and cider. The locker room temperature was set unusually low to acclimatize the team.

Defenders Walker Zimmerman and Chris Richards were the only starters for either team to wear short sleeves. About 12 minutes in, El Salvador’s Enrico Hernández went to the bench and took off his thermal underwear.

Pulisic, McKennie and Tyler Adams started together for just the second time, the first since a March 2019 exhibition against Ecuador. Pulisic struggled to create and was replaced by Brenden Aaronson in the 65th minute.

"The effectiveness could have been more," Berhalter said. "It’s just about him finding his top form and really finding ways to get him in front of goal, because that’s where he really shines."

NOTES: Mexico rallied for a 2-1 win at Jamaica. Daniel Johnson's 50th-minute goal for the hosts was overcome when Henry Martín scored in the 81st and Alexis Vega in the 83rd. ... Canada won 2-0 at Honduras on Denil Maldonado's 10th-minute own goal and Jonathan David's eighth goal of qualifying in the 73rd. ... Bryan Ruiz's 65th-minute goal led Costa Rica over visiting Panama 1-0.