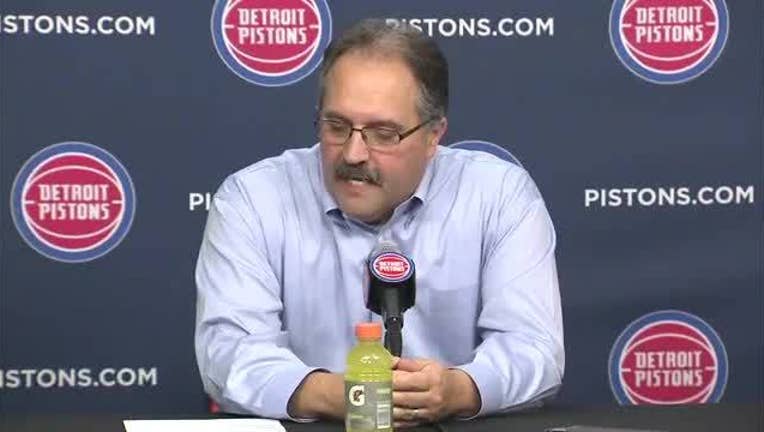 MIAMI (AP) - The playoff spot is a long way from clinched, and it's not Miami's style to be pleased about anything involving being in eighth place.

That being said, the Heat knew what this win meant.

Kelly Olynyk and Josh Richardson each scored 17 points, James Johnson added 14 and the Heat strengthened their grip on an Eastern Conference postseason berth with a 105-96 over the Detroit Pistons on Saturday night.

Goran Dragic and Justise Winslow each had 13 points, Dwyane Wade added 11 and Hassan Whiteside grabbed 19 rebounds for the Heat - who moved four games clear of Detroit in the chase for the No. 8 spot in the East.

"Two desperate teams going at it," Heat coach Erik Spoelstra said. "That's what this league is about. ... This win was paramount."

Blake Griffin scored 31 points and Andre Drummond finished with 22 points and 18 rebounds for the Pistons, who were playing their fifth game in seven nights. Reggie Bullock scored 11 points for Detroit, which dropped to 2-8 in their last 10 overall and 1-13 in its last 14 on the road.

"We've got to turn it around somewhere and get this thing rolling," Griffin said.

In Griffin's 36 minutes, Detroit outscored Miami by seven. In the 12 minutes where Griffin sat, the Heat outscored the Pistons by 16.

"We played Blake into exhaustion," Pistons coach Stan Van Gundy said. "We just struggled playing without him. He was dominant and every time he was out, we struggled."

Detroit got outscored 47-20 in a 17-minute span of the first half to fall behind by 18. But the Pistons made it very interesting in the fourth, until the Heat found a little spark.

Rodney McGruder's 3-pointer with 7:19 remaining put Miami up by eight, and Wade tried to set him up for another on the next Heat possession. Instead, McGruder made the extra pass to Olynyk for another 3 - and in a span of about 30 seconds, a five-point lead swelled to 94-83.

That was Miami's first double-digit lead of the final quarter, and the Heat kept control the rest of the way.

The night had dual meaning for Wade.

He had a special pair of sneakers at his locker before the game, with the logo of Marjory Stoneman Douglas High on the toes and with the name of student Joaquin Oliver - one of 17 victims of that school shooting near Miami last month - printed on them. The teen was buried in a Wade jersey, and his favorite player met with his family to present them with the shoes and a custom jersey that Joaquin talked about getting in the final days of his life.

Wade said he wanted to express his appreciation to the family, and again vowed to do whatever he can to help raise awareness about the need to curb gun violence going forward.

"It's bigger than basketball," Wade said. "Obviously, I'm back here to do a job. But the timing was perfect for me to come back here for this city and the state. We both needed each other. I'm thankful I can come back and be able to be a leader and a voice in the community, more so than coming back and scoring any baskets. That's more important."

Pistons: Saturday started a stretch where Detroit plays six playoff contenders in a seven-game span. After that, nine of the Pistons final 13 are against teams under .500. ... Detroit outscored Miami in the first quarter of all four games this season, albeit by a total of nine points - one on Saturday.

Heat: Bam Adebayo (personal reasons) was not with the team, while Tyler Johnson and Wayne Ellington (both with quad bruises) were again sidelined. Adebayo is expected to play Monday. ... The Heat had one field goal in the final 5:56 of the third.

Dragic took no shots in the second half, with Detroit blitzing him at nearly every touch. All 13 of his points came in the first half.

In the four Miami-Detroit games this season, neither team used the same starting lineup twice. Both had 10 different players start at least one game in the season series; only Dragic, Richardson and Reggie Bullock started all four matchups.