Rookie Lucas Raymond had his first goal since Dec. 1, and Robby Fabbri and Michael Rasmussen also scored for Detroit which was 0-2-2 during its skid and won for just the second time in eight games. Dylan Larkin had two assists.

Aaron Dell had 35 saves for the Sabres, who are 0-3 against the Red Wings this season.

Bertuzzi got Detroit on the scoreboard 8:57 into the game. He knocked in the rebound of a shot by Larkin on a power play for his 18th goal of the season and ninth goal in 10 games. 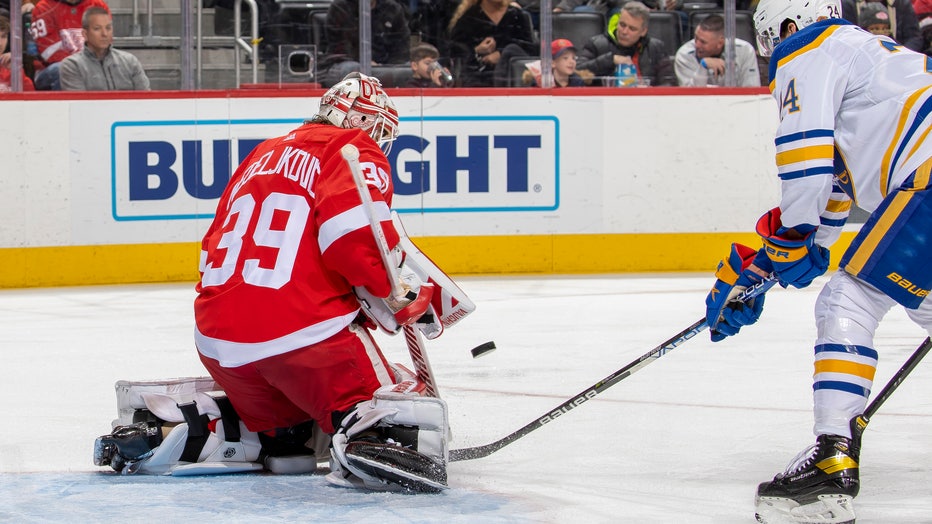 DETROIT, MI - JANUARY 15: Alex Nedeljkovic #39 of the Detroit Red Wings makes a save as Dylan Cozens #24 of the Buffalo Sabres crashes the net during the second period of an NHL game at Little Caesars Arena on January 15, 2022 in Detroit, Michigan. (

Fabbri made it 2-0 with 51 seconds remaining in the period during the tail end of a four-minute power play. Fabbri one-timed a backhanded pass from Bertuzzi in front of the net for his 10th.

The Red Wings killed off three penalties in the second period to retain the two-goal advantage.

Raymond ended a 14-game goal drought when he scored 13 seconds into the third off a feed from Larkin. It was his 11th.

Rasmussen scored with 7:36 remaining after coming out of the penalty box for his fourth.

NOTES: Buffalo forward Zemgus Girgensons sat out due to an undisclosed injury. ... Larkin has eight 18 points (10 goals, eight assists) in 23 career games against Buffalo. ... Detroit defenseman Filip Hronek recorded his 100th career point with an assist on Rasmussen's goal. ... The Red Wings had a season-high 22 shots on goal in the first period. ... Tage Thompson, who leads the Sabres in points, exited COVID-19 protocols and played for the first time in three games.

The teams will complete the home-and-home set at Buffalo on Monday.