"I'm overjoyed for our guys after the work they put in tonight," Pistons coach Dwane Casey said. "That's what happens with a young, rebuilding team. Tthere are going to be nights like this where people are going to say, ‘Whoa, where did that come from?’ That's exciting."

Cunningham had 23 points, 10 rebounds and nine assists to help the Pistons won for the first time since their opening game. Isaiah Stewart added 24 points and 13 rebounds as Detroit's starters scored 111 points. 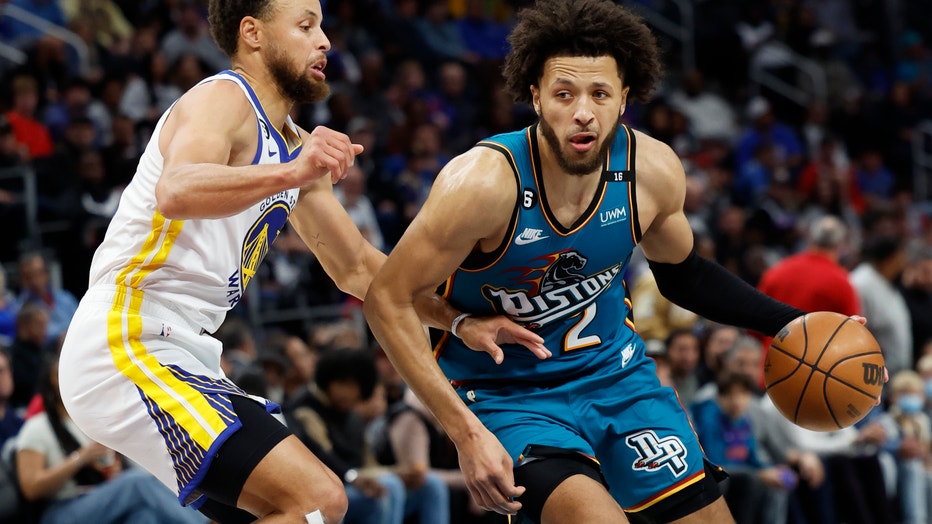 DETROIT, MICHIGAN - OCTOBER 30: Cade Cunningham #2 of the Detroit Pistons dribbles on Stephen Curry #30 of the Golden State Warriors in the second half of the game at Little Caesars Arena on October 30, 2022 in Detroit, Michigan. NOTE TO USER: User e

"I think tonight we showed what Pistons basketball is going to be," Stewart said. "We played defense the way we needed to play it every night, and on offense we were sharing the ball and making sure everyone got shots."

Steph Curry had 32 points and Jordan Poole added 30 for Golden State, coming off a 120-113 overtime loss in Charlotte on Saturday. The Warriors played without Klay Thompson (rest).

"We can't stop fouling, and something needs to click with our guys," Warriors coach Steve Kerr said after his team put Detroit on the line 38 times. "We have to be near the bottom of the league in defensive efficiency and that puts us in some bad spots offensively."

Golden State led by 10 early in the second quarter, but the Pistons responded with a 29-9 run to take a 10-point lead of their own. Stewart had 15 points and seven rebounds in the first half, including a rare 3-pointer to put Detroit up 63-55 at halftime.

Curry was 3-8 on 3-pointers in a 15-point half, but the rest of the Warriors went 1-13 from behind the arc. Golden State had a 22-12 edge on points in the paint, but Detroit's jump shooting gave them a decided edge.

"I think our offense is killing our defense, whether it is floor balance or whether the ball doesn't move and guys are stagnant," Draymond Green said. "The two ends aren't connecting, and in order to be a great team, those two ends have to connect."

Warriors: Poole and Curry outscored their teammates 62-52 in the first three quarters. Their fellow starters — Draymond Green, Kevan Looney and Andrew Wiggins — combined for 19 points on 7-of-24 shooting.

Pistons: Detroit had more points in the first three quarters (100) than they averaged in four losses (96.3) to the Warriors over the last two seasons. ... Rookie C Jalen Duran left in the fourth quarter with a left leg injury. Casey said he would know more on Monday morning.

Warriors: At Miami on Tuesday night.

Pistons: At Milwaukee on Monday and Wednesday nights.