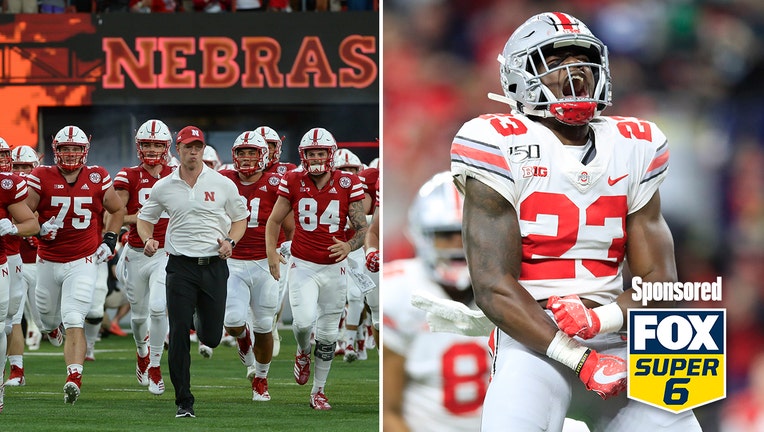 LEFT: Head coach Scott Frost of the Nebraska Cornhuskers leads the team on the field before the game against the Akron Zips at Memorial Stadium on September 1, 2018 in Lincoln, Nebraska. (Photo by Steven Branscombe/Getty Images) RIGHT: Jahsen Wint #2

While college football has been playing games for more than seven weeks now, one of the final pieces falls into place this weekend to make the season feel whole.

The Big Ten is back on the gridiron

After delaying the season for eight weeks, the conference will start a league only sprint to the finish that will likely result in one of its teams entering the College Football Playoff. And it starts with three big games, including a Nebraska-Ohio State contest that will be the Big Noon Saturday contest live on FOX from Columbus.

That is the marquee matchup of the weekend in college football and the leadoff game in FOX Bet’s Super 6 contest. Here’s the schedule for Saturday’s top games.

Just download the FOX Super 6 app on your phone, pick all six of the college football games listed and the margins of victory in each. If you do that, you could win the jackpot of $25,000. Just download the app in the Apple Store or Google Play. The best part is it's free!

No team in the Big Ten is expected to do more big things than the Buckeyes, who made the College Football Playoff last year and is expected to field a potential Top 5 NFL Draft pick in quarterback Justin Fields. Adrian Martinez has been a starting quarterback for the Cornhuskers for the past few years, but more is going to be expected if Nebraska will make some noise.

The Tar Heels received a jolt last week with a 31-28 loss at Florida State that knocked them from the Top 5 all the way down to No. 17 in the polls. Sophomore Devon Leary has the Wolfpack on the move, winning three games in a row and looking to take a sweep of the “Triangle” games in back to back weeks against Duke and North Carolina.

Perhaps the biggest remaining game on the Big XII schedule features two Top 20 teams who can tighten the screws on defense. Iowa State has only allowed 97 yards rushing per game. The Cowboys, meanwhile, have allowed only just 26 points in wins over Kansas, West Virginia and Tulsa.

A huge game for the Nittany Lions before Ohio State rolls into Beaver Stadium next week for a huge game with College Football Playoff ramifications. One thing that Penn State should be worried about- the Hoosiers pushed them in State College last year before they prevailed 34-27. The Nittany Lions will miss potential Top 5 NFL pick in Linebacker Micah Parsons, who opted out of the season.

A Saturday night game with the potential for below freezing temperatures and snow flurries? Welcome to Minneapolis in late October – not just opening night. Michigan is going to run a lot of fresh faces in there like quarterback Joe Milton. Meanwhile, Minnesota coach PJ Fleck returns Tanner Morgan at quarterback along with wide Receiver Rashod Bateman. The Gophers finished 11-2 in 2019 and could push their way into the Big Ten title game.

Look at the American Conference getting the big-time treatment as a potential outside shot at the College Football Playoff may ride on this contest, which sees the Bearcats try to slow down SMU quarterback Shane Buechele’s march towards 4000 yards. Buechele has thrown for 12 touchdowns and just two interceptions. Cincinnati’s defense has only allowed 171 yards through the air per game so far.