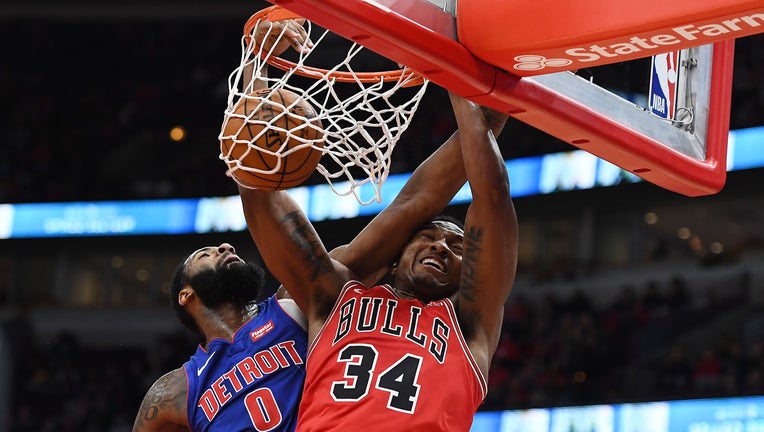 CHICAGO, ILLINOIS - NOVEMBER 01: Wendell Carter Jr. #34 of the Chicago Bulls dunks against Andre Drummond #0 of the Detroit Pistons during the second half of a game at United Center on November 01, 2019 in Chicago, Illinois. NOTE TO USER: User expres

Rose delighted the hometown crowd with 23 points and seven assists. But the Bulls came away with the win after dropping three in a row while handing the Pistons their fourth loss in five games.

LaVine put Chicago ahead for good with back-to-back 3-pointers and added four free throws in the final 11.5 seconds.

Rose got a loud ovation when he entered the game in the first quarter and heard those familiar "MVP! MVP!" chants from the Chicago crowd throughout the night. The South Side product flashed some of the old explosiveness that made him the No. 1 overall draft pick in 2008 and NBA's youngest MVP three years later, before injuries derailed his promising career with the Bulls.

Andre Drummond led Detroit with 25 points and 23 rebounds - his third 20-20 game this season.

Luke Kennard scored 15 and made three 3-pointers. But the Pistons missed their first 14 from beyond the arc before he hit one late in the first half and were 6 of 29 in the game.

But LaVine responded by hitting back-to-back 3's to put the Bulls back on top 105-100 with three minutes left.

Chicago was clinging to a 107-104 lead with just over a minute remaining when Tomas Satoransky got called for traveling. But Rose missed a runner.

After LaVine missed a layup, Snell missed a 3 for Detroit. Carter then made 1 of 2 free throws with 17.5 seconds remaining to make it 108-104. Kennard then missed a 3, and LaVine hit two free throws, bumping the lead to six with 11.5 seconds left.

Pistons: The Pistons still don't have a timetable for the return of star F Blake Griffin (left hamstring and posterior knee soreness), who has missed the first six games. "Obviously, we're all hoping that it's sooner than later," said assistant Sidney Lowe, who handled pregame media duties with coach Dwane Casey a game-time decision because of an illness. "He was out there on his own today doing some stuff."

Bulls: Coach Jim Boylen expects F Chandler Hutchison (strained left hamstring) to practice Saturday and travel with the team to Indiana for Sunday's game. He wasn't sure if the second-year pro will be ready to make his season debut against the Pacers. ... Rose wasn't the only former Bulls player to get a big ovation. The crowd greeted former teammate Joakim Noah with a big one when he was shown on the videoboard in the second quarter.