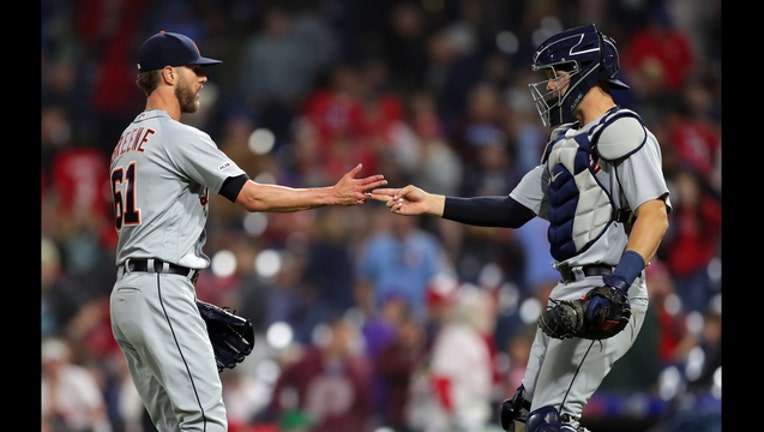 PHILADELPHIA, PA - APRIL 30: Shane Greene #61 of the Detroit Tigers is congratulated by catcher Grayson Greiner #17 after saving the game in the ninth inning against the Philadelphia Phillies. (Photo by Hunter Martin/Getty Images)

PHILADELPHIA (AP) - The Tigers have dedicated a special container for Miguel Cabrera's milestone baseballs, and the Detroit slugger added another one to the crowded bucket.

Cabrera had an RBI single to move into a tie for 68th all-time with 2,705 career hits, and the Tigers beat the Philadelphia Phillies 3-1 on Tuesday night.

Cabrera matched Doc Cramer with a third-inning base hit to left.

"We are saving so many baseballs," manager Ron Gardenhire said. "It's just incredible, all of the numbers."

Although an infrequent visitor to Philadelphia, Cabrera enjoys hitting there. He upped his average to .322 with 20 RBIs in 39 games at Citizens Bank Park.

Cabrera was productive at the Phillies' former home, too, batting .409 in six games at Veterans Stadium during his rookie season in 2003 with the Marlins.

Niko Goodrum added a two-run homer and Spencer Turnbull pitched six strong innings as the Tigers snapped a four-game skid while rebounding from Sunday's 4-1 loss at the White Sox in which they tied a major-league record for a nine-inning game by striking out 20 times.

It was the Tigers' first meeting with the Phillies since 2016 and their first trip to Philadelphia since 2007.

"It's a nice win against a really good baseball team," Gardenhire said.

The NL East-leading Phillies managed just four hits while falling to 11-6 at home.

Turnbull (2-2) was a late replacement for scheduled starter Tyson Ross, who was placed on the paternity list. The rookie allowed one run and three hits with five strikeouts and two walks.

Shane Greene pitched a scoreless ninth for his 12th save in as many chances.

Vince Velasquez (1-1) needed 99 pitches to get through 3 2/3 innings before being lifted. Velasquez, who entered with a 1.99 ERA, gave up three runs and six hits with seven strikeouts and three walks.

The right-hander's night - and the Phillies' - took a turn for the worse in the third when first baseman Rhys Hoskins lost Nicholas Castellanos' pop fly in the lights, resulting in an unlikely double. What should've been the second out with nobody on base turned into a three-run inning for the Tigers with Velasquez needing 28 pitches to get through the frame.

Second baseman César Hernández and right fielder Bryce Harper also were in the area to make the catch, but neither could locate the ball.

"It's a ball that all three guys on a normal night can catch," Phillies manager Gabe Kapler said. "I've been there before as an outfielder. The ball goes up, you look up, you see black. It's not something you can do different, it's not a talent thing. It happens sometimes. It's unfortunate, but it's part of baseball."

Cabrera singled home Castellanos, and Goodrum followed by sending Velasquez's 2-2, 94-mph fastball into the seats in right to give Detroit a 3-1 lead.

That was plenty of support for Turnbull, who overcame some wildness to earn his second career victory. The 26-year-old right-hander had three wild pitches and hit a pair of batters.

Turnbull struck out in all three plate appearances, falling to 0-for-5 with four strikeouts in his career.

"I definitely need some work on my swing; not so proud of it at the moment," he said. "I don't know if I've ever seen anything that hard. Ninety-six (mph) is like invisible."

Detroit improved to 12-7 against the Phillies.

Tigers: Jordy Mercer, out since April 13 with a right quad strain, started at shortstop. ... 2B Josh Harrison was placed on the 10-day injured list retroactive to April 27 with a bruised left shoulder. He is hitting .156 with a homer and seven RBIs in 22 games.

Phillies: Nick Williams took a fastball off his left knee in the fourth inning but stayed in the game. J.T. Realmuto also was hit by a pitch from Turnbull but wasn't hurt.