ARLINGTON, Texas - ARLINGTON, Texas (AP) — Javier Báez hit an RBI single in each of the first two innings and Jeimer Candelario connected for a two-run homer against Dallas Keuchel, helping the Detroit Tigers pound the Texas Rangers 11-2 on Saturday night.

Eric Haase hit a sacrifice fly off Keuchel, and then added a two-run homer during Detroit's three-run ninth.

Eduardo Rodriguez (3-3) won his second consecutive start since his return to the Tigers after three months away because of a ribcage injury and time on the restricted list to deal with family issues. Six days after tossing five scoreless innings against the Los Angeles Angels in his first big league start since May 18, the left-hander limited Texas to one run and six hits over six innings. 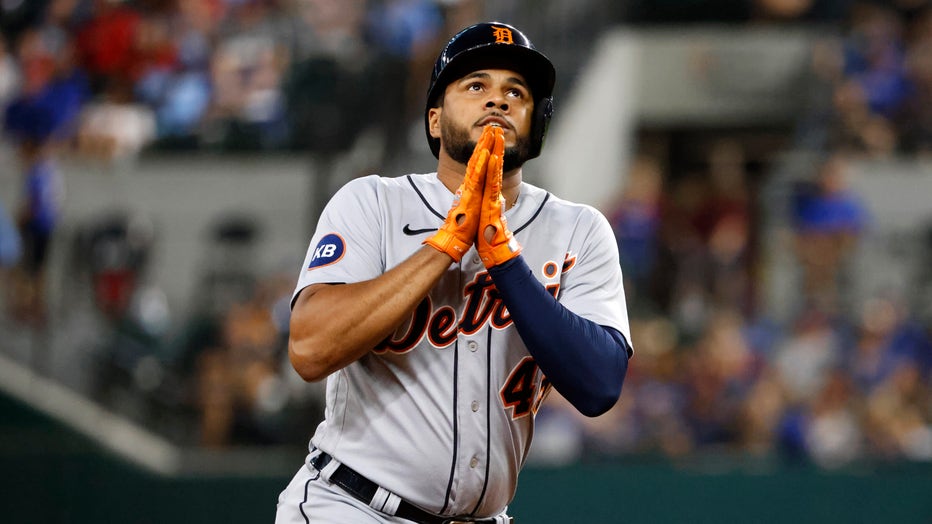 ARLINGTON, TX - AUGUST 27: Jeimer Candelario #46 of the Detroit Tigers celebrates his two-run home run against the Texas Rangers during the sixth inning at Globe Life Field on August 27, 2022 in Arlington, Texas. (Photo by Ron Jenkins/Getty Images)

Rangers right fielder Adolis García extended his hitting streak to 23 games, the longest active streak in the majors and longest in the American League this season. García singled in the sixth and led off the ninth with his 21st homer.

Keuchel (2-8) allowed seven runs and 11 hits over 5 1/3 innings. The 34-year-old left-hander struck out one and walked one while throwing 69 of his 96 pitches for strikes.

The Rangers signed Keuchel to a minor league contract July 25, and the 2015 AL Cy Young Award winner was 1-0 with a 2.31 ERA in four starts for Triple-A Round Rock before joining their big league team this weekend. He made starts earlier this season for the Chicago White Sox and Arizona before getting released by both teams.

His first start for the Diamondbacks was also against Detroit, which had four runs and six hits off him over 4 1/3 innings two months ago. The Tigers manager is A.J. Hinch, whom Keuchel pitched for in Houston from 2015-18, including a World Series title in 2017.

Detroit went ahead to stay in the first when Báez singled in Victor Reyes and then scored on single by Willi Castro. It was 4-1 in the second inning after Reyes had a sacrifice fly and Báez, who had only two RBIs over his previous 16 games, had an infield single that drove in a run.

Candelario's 11th homer was a 418-foot drive to center for a 7-1 lead. Keuchel faced only two more batters after that.

Garcia is one short of matching the longest MLB hitting streak by a Cuban-born player. Rafael Palmeiro had a 24-game hitting streak with Baltimore in 1994. The only longer hitting streaks in the majors this season are by Trea Turner of the Los Angeles Dodgers (26) and Paul Goldschmidt for St. Louis (25). The Texas team record in 28 in 2000 by Gabe Kapler.

Nathaniel Lowe drove in a run in the Texas first with the first of his two singles that pushed his MLB-best total to 52 hits over 36 games since the All-Star break. ... The Tigers had three sacrifice flies, the first time this season scoring multiple runs on flyball outs. After Reyes and Haase, Zack Short added a sac fly in the sixth.

Tigers: RHP Casey Mize, who underwent Tommy John surgery on his right elbow June 15, was with the team in Arlington. He had a checkup with Rangers team physician Dr. Keith Meister, who performed the surgery.

Right-hander Drew Hutchinson, 1-4 with a 3.90 ERA in his 11 starts for the Tigers after 10 relief appearances, pitches the finale. Kohei Arihara makes only his third start for Texas, having gone 1-1 with a 2.31 ERA since getting called up from Triple-A Round Rock.

ARLINGTON, TX - AUGUST 27: Jeimer Candelario #46 of the Detroit Tigers celebrates his two-run home run against the Texas Rangers during the sixth inning at Globe Life Field on August 27, 2022 in Arlington, Texas. (Photo by Ron Jenkins/Getty Images)