The Tigers went ahead by five and hung on after Chicago scored three in the eighth and put two on in the ninth, extending their longest win streak since a seven-game run last July.

Candelario hit a tying two-run homer against Lucas Giolito in the sixth inning and chased him with a two-out RBI single in the seventh that made it 3-2. 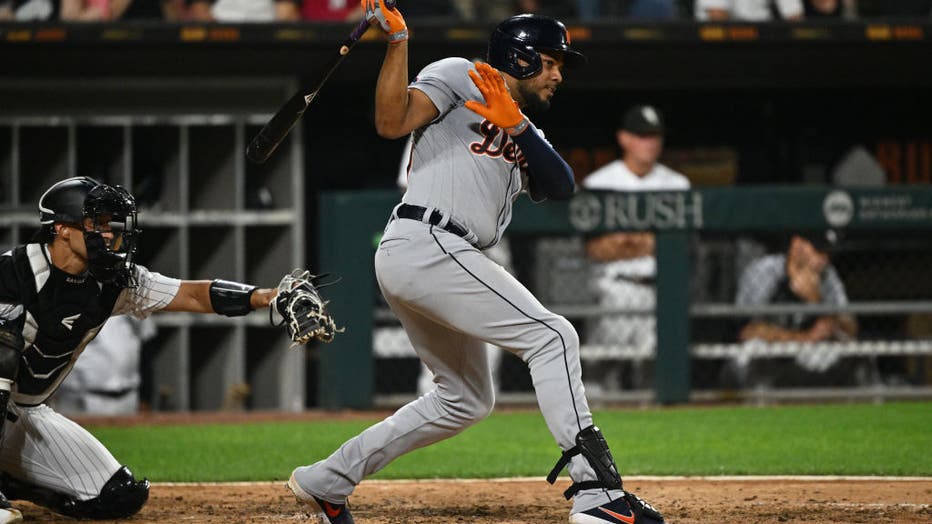 CHICAGO, IL - JULY 08: Jeimer Candelario #46 of the Detroit Tigers hits an RBI single in the seventh inning against the Chicago White Sox at Guaranteed Rate Field on July 8, 2022 in Chicago, Illinois. (Photo by Jamie Sabau/Getty Images)

The Tigers got another run in the eighth when Eric Haase singled and center fielder Luis Robert allowed Spencer Torkelson’s long fly to drop, bumping the lead to 7-2.

The White Sox scored three in the bottom half before pinch-hitter Andrew Vaughn struck out with runners on the corners to end the rally.

The only runs he allowed were on Robert’s towering two-run homer in the first. The left-hander gave up six hits, struck out seven and walked one.

Michael Fulmer pitched out of a jam in the ninth to pick up his second save in four chances. The White Sox had runners on first and third after he hit Tim Anderson in the shoulder with one out and AJ Pollock singled. But Robert struck out and José Abreu hit a fly to right.

Giolito (5-5) allowed five runs and five hits in 6 2/3 innings. The right-hander struck out eight and sailed through the first five innings before things started to unravel for him.

Abreu extended his hitting streak to 13 games with a double and single. But the White Sox lost for the fourth time in five games.

Tigers: OF Austin Meadows (strained right and left Achilles tendons), on a rehab assignment, continues to experience some soreness and was not in the lineup for Triple-A Toledo on Friday. "He has not been shut down, but he's been slowed down," manager A.J. Hinch said. ... RHP Kyle Funkhouser (strained right shoulder) threw a bullpen session. Hinch said he felt "great" afterward. ... RHP Matt Manning (right shoulder inflammation) also threw off the mound, with Hinch saying his next step could me a rehab assignment. ... RHP Rony García (sore right shoulder) threw long toss. ... The Tigers have RHP Alex Faedo (hip inflammation) penciled in to start one of Monday's doubleheader games at Kansas City as the 27th man, assuming no setbacks from a bullpen session scheduled for Saturday.

White Sox: OF/1B Andrew Vaughn (illness) was out of the lineup for the second consecutive game. ... The White Sox held 3B Yoán Moncada (bruised right foot) out of the lineup. He played in Thursday's loss to Detroit after leaving Wednesday's win over Minnesota.

The four-game series continues with Detroit sending RHP Garrett Hill (1-0, 1.50 ERA) to the mound and RHP Johnny Cueto (2-4, 3.30) going for Chicago. Hill won his major league debut by pitching six impressive innings against Cleveland on Monday. Cueto has a 2.88 ERA in five starts against the Tigers, though he hasn’t faced them since 2015.