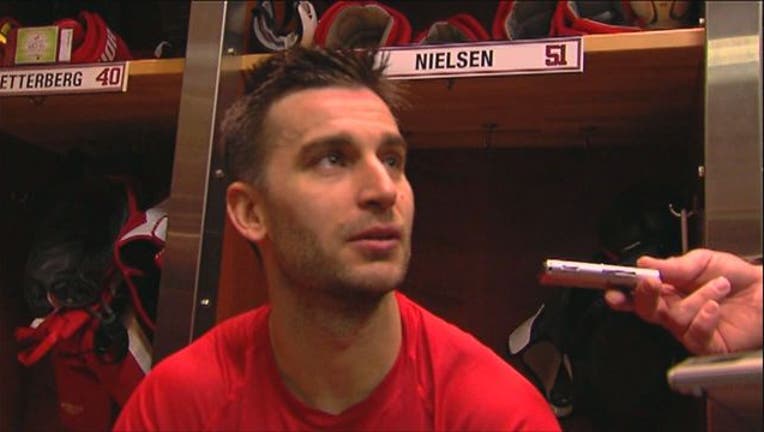 VANCOUVER, British Columbia (AP) - Elias Pettersson was hard on himself after his first game back from a knee injury. His coach was more forgiving.

Pettersson had a goal and an assist, and the Vancouver Canucks beat the Detroit Red Wings 3-2 on Sunday.

"I felt I lost the puck a few times, made some bad decisions, some turnovers. But I've just got to play it simple," Pettersson said.

The 20-year-old rookie, who ran his point total this season to 44, missed five games after suffering an MCL sprain against Montreal on Jan. 3.

"I thought he was pretty good for being out for a bit," Vancouver coach Travis Green said.

"Whenever you miss (games with) an injury, and especially an injury that's with your lower body, your leg, your knee, it takes a couple games."

Pettersson's goal gave Vancouver the early lead, but the team had to rally from a 2-1 deficit after an ugly second period.

"We were lucky they didn't score more in the second," Green said, adding that he wasn't sure whether to berate his team during the second intermission or just feel sorry for them.

"I just said, 'Hey, we've got a chance to win. If you haven't been good tonight, look in the mirror.' And give them credit - they did. They found their game. And when a team responds, you're proud of them."

Roussel broke a 2-2 tie with 6:47 remaining in the game, tipping in a shot fired by Jake Virtanen. The play came less than three minutes after Bernier stopped Roussel on a breakaway.

Horvat evened the game 7:27 into the third period, sweeping in a low wrist shot in for his 18th goal of the season.

The tally broke a scoring drought for Horvat, who had 38 shots without a goal in his previous 11 games.

"It definitely put a smile on my face to score a big goal like that," he said. "It's funny how it works. You have all these grade-A chances that all should have gone in and that one goes in, so I'm definitely happy to get one for sure."

Vanek said it was frustrating for his team to give up another third-period lead.

"It's tough. We're all pros, we want to win," he said. "It's no fun when you keep losing, but I think at least we are at the stage where we are playing consistently well. There's not bonus points for that unfortunately, but as a group we just have to put it behind us."

The Wings dropped a 6-4 decision in Calgary on Friday.

"That's the league right now," coach Jeff Blashill said. "It's so tight that when you get on a roll you can really get on a roll. But that goes both ways, winning and losing, and right now we're on a roll the wrong way. We just keep finding ways to lose hockey games."

NOTES: Nielsen's second-period goal marked the 450th point of his NHL career. ... Brock Boeser had two assists for the Canucks. He now has five points in four games. ... Detroit D Dennis Cholowski was a healthy scratch for the first time in his rookie season. The native of Langley, British Columbia, has seven goals and nine assists across 47 games.

The Wings will wrap up a Canadian road swing Tuesday when they visit the Oilers in Edmonton.

The Canucks have one more game before the All-Star break. They'll host the Carolina Hurricanes on Wednesday.