INDIANAPOLIS - Caris LeVert scored 20 of his 31 points in the first half and the Indiana Pacers sent the Detroit Pistons to their 13th straight loss, 122-113 on Thursday night.

Saddiq Bey led the Pistons with 28 points and 10 rebounds. Cade Cunningham added 19 points, and Frank Jackson had 18. Detroit is an NBA-worst 4-23.

The Pacers had to play the last several minutes of the third quarter in the third quarter without Domantas Sabonis and Myles Turner after they each picked up their fourth foul. Despite Sabonis playing just a little more than four minutes and Turner 6 1/2, the Pacers were able to take a 103-91 lead. 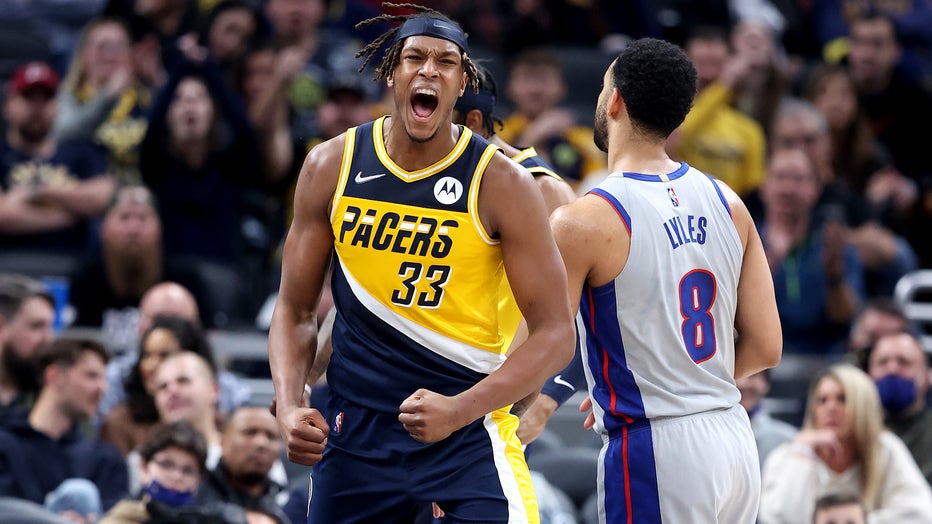 INDIANAPOLIS, INDIANA - DECEMBER 16: Myles Turner #33 of the Indiana Pacers celebrates against the Detroit Pistons at Gainbridge Fieldhouse on December 16, 2021 in Indianapolis, Indiana. NOTE TO USER: User expressly acknowledges and agrees that, by d

Turner finished with 16 points and four blocked shots. Sabonis had 12 points and a nine rebounds. Chris Duarte added 15 points off the bench.

Pistons: Coach Dwane Casey is out for personal reasons, not related to COVID-19. Assistant coach Rex Kalamian directed the team. .. Detroit last won at home against Indiana on Nov. 13.

Pacers: Malcolm Brogdon sat out because of a sore right Achilles. Brad Wanamaker made his first start of the season, replacing Brogdon. Wanamaker finished with six points ... Acting coach Lloyd Pierce said head coach Rick Carlisle should be able to return for one of the weekend practices and coach Tuesday at Miami … Indiana recalled Goga Bitadze from its G-League affiliate Thursday. The Fort Wayne Mad Ants. Bitadze, who joint the Mad Ants on Tuesday, averaged 28.5 points and 10.5 rebounds in two games.

Pacers: At Miami on Tuesday night.