Detroit won despite getting just four hits. The Tigers beat Cleveland for just the seventh time in their last 28 games at Comerica Park.

"We definitely feel like we’re taking it on the chin," Tigers manager A.J. Hinch said, "but we won a series against a division team." 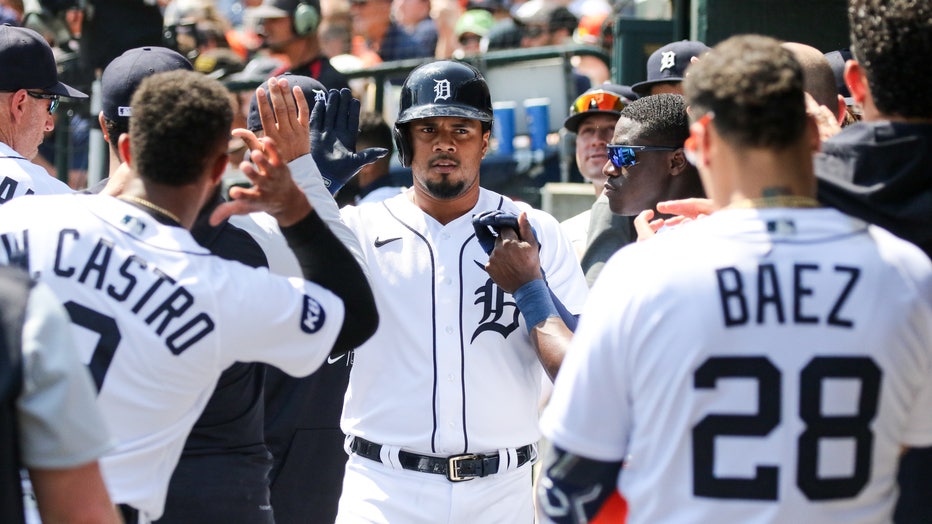 DETROIT, MI - MAY 29: Detroit Tigers third baseman Jeimer Candelario (46) is congratulated by his teammates in the dugout after hitting a solo home run to right field during the sixth inning of a regular season Major League Baseball game between the

"Another day, another injury," Tigers manager A.J. Hinch said. "But we won a series and that’s what we wanted to do."

The 24-year-old righty came up limping during his fifth-inning warmup and had to leave.

Acquired from the Los Angeles Angels as part of the trade for Justin Upton in 2017, he was recalled from Triple-A Toledo last week to take the spot of injured starting pitcher Eduardo Rodriguez.

"Hated that he had to come out. Man, did he pitch well," Hinch said. "The decision to take him out was easy, but it was unfortunate because he’d been in complete control."

Alex Lange (2-1) got four outs for the win. Gregory Soto, the sixth Detroit pitcher, worked around a two-out single and closed for his eighth save.

"We’ve got to make our chances – we didn’t have many opportunities," Guardians manager Terry Francona said. "Those are things we will continue to preach to these guys that we have to do."

Luke Maile drove in Cleveland’s lone run in the seventh inning with a sacrifice fly that scored Andres Gimenez.

Castro homered in the fourth off Triston McKenzie (3-4).

Candelario, who pinch-hit for designated hitter Robbie Grossman in the third, hit his team-leading fifth home run in the sixth. Grossman is listed day-to-day with neck spasms.

"It was another opportunity for Candy. We kind of ambushed him," Hinch said. "We were giving him a mental day off and he ended up with a big swing."

McKenzie, who pitched perfect ball for 7 2/3 innings in his previous start against the Tigers on Aug. 15, 2021, needed just 90 pitches to work 7 2/3 innings this time. The 24-year-old righty gave four hits, struck out eight and issued one walk.

"I think he’s figuring out what it takes to be a good pro, and that he takes it to the mound on the day he pitches," Francona said.

Candelario hit a hard foul ball in the third inning that hit Tigers first base coach Gary Jones in his lower body. Jones fell awkwardly and stayed on the ground for several minutes before returning to his feet. He remained in the game.

"It happened quickly and it didn’t look pretty, so I was glad to see him get up, for obvious reasons," Francona said. "I’m guessing he’s not going to run a marathon tonight, but it was nice to see him get up."

Guardians: RHP Aaron Civale (left glute tightness) is scheduled to throw a bullpen session, and barring a setback, will make a shortened start with Triple-A Columbus. "The idea is to get him into a rehab game soon to see if he can slot back into the rotation in the near future," general manager Mike Chernoff said. ... OF Franmil Reyes underwent an MRI earlier this week, which revealed a mild strain. Chernoff said Reyes, who was placed on the 10-day on May 25, will meet with team trainers on Monday to discuss next steps.

Tigers: DH Miguel Cabrera didn’t play after leaving Saturday’s game with lower back tightness. "He’s still sore, but he’s doing better than when he left," Hinch said. "Hopefully, another day of treatment will make him better." ... LHP Tyler Alexander (elbow sprain) is scheduled to throw three innings in a rehab start for Triple-A Toledo on Monday, followed by four innings later in the week. Hinch said the team will determine Alexander’s role when he is cleared to return. "Our original plan was to have him be a bulk reliever when he came back," Hinch said. "And now we’re a couple injuries deep into the rotation."

Tigers: RHP Beau Brieske (0-4, 5.04) is scheduled to make his fifth major league start Monday at Minnesota. Brieske is winless in four career starts, and allowed two earned runs in four innings in his last start May 24 in Minnesota. Dylan Bundy (3-2, 4.54) starts for the Twins. He worked 5 ⅔ innings of one-run ball against the Tigers on May 25.