CHICAGO - Dylan Cease struck out a season-best nine in his first career shutout, Yoán Moncada and Yermín Mercedes homered, and the Chicago White Sox completed a doubleheader sweep of the slumping Detroit Tigers with an 11-0 win Thursday night.

José Abreu and Leury García each drove in two to help doom the AL-worst Tigers to their 12th loss in 14 games. Chicago has won six of seven. 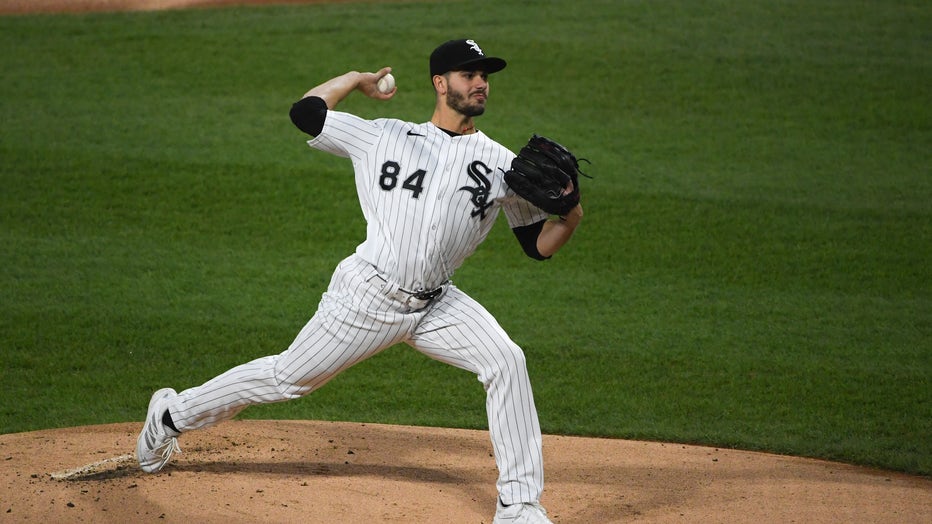 CHICAGO, ILLINOIS - APRIL 29: Dylan Cease #84 of the Chicago White Sox pitches in the first inning against the Detroit Tigers at Guaranteed Rate Field on April 29, 2021 in Chicago, Illinois. (Photo by Quinn Harris/Getty Images)

Tigers starter Matthew Boyd (2-3) left after facing seven batters because of left knee tendonitis. With the score 0-0, the 30-year-old left-hander walked Yasmani Grandal leading off the second and gave up a double to Andrew Vaughn on his 36th pitch, a drive to the gap in left-center.

Boyd signaled to the dugout with a 1-1 count to Leury García, and manager A.J. Hinch and an athletic trainer went to the mound. Boyd then left the game.

Cease (1-0), who hadn’t made it through five innings in his first four starts, cruised from there. He retired his final 17 batters and finished with three hits and no walks allowed in a seven-inning game. Detroit batters struck out 21 times and managed just one extra-base hit in the twinbill.

Moncada hit a three-run homer and Mercedes added a solo shot in the seven-run seventh off reliever Alex Lange. García had a two-run single off Derek Holland to open the scoring in the inning.

Carlos Rodón struck out a career-high 12 in six innings of the opener, a 3-1 victory. Rodón (4-0) made his first home start since pitching a no-hitter against Cleveland on April 14. He allowed two hits and walked one, and his ERA rose from 0.48 to 0.72.

Rodón struck out seven of his first nine batters, including five straight. He has 30 strikeouts in 25 innings this season.

"I consider myself a rhythm guy on the mound and when I get in a groove I feel a lot better," said Rodón, who finished April holding opposing batters to a .085 average (7 for 82). "Right now we’re just doing it right, I guess."

Liam Hendriks got three straight outs for his fifth save in seven chances. The doubleheader was caused by a rainout Wednesday.

Chicago’s first three batters reached on the fifth on a single and two walks. Billy Hamilton hit a tying groundout, and García hit the next pitch for a two-run single.

A loud round of cheers rolled through the park during the Tigers’ half of the second inning moments after the Chicago Bears selected Ohio State quarterback Justin Fields with the 10th pick in the NFL draft.

Tigers: JaCoby Jones slammed into the center-field wall after catching Adam Eaton’s first-inning drive in the opener but remained in the game.

White Sox: OF Luis Robert was recalled from the COVID-19 injured list before the game and LHP Garrett Crochet (upper back strain) was placed on 10-day injured list, a move retroactive to Monday. Robert, who did not play in the first game, had reported flu-like symptoms Monday.