BOSTON - Jayson Tatum and Jaylen Brown each scored 26 points in the first three quarters, and then rested while the Boston Celtics closed out the Detroit Pistons for a 114-93 victory Friday night.

Rookie Grant Williams added a career-high 18 points and Enes Kanter pulled down 18 rebounds for the Celtics, who finished with a 51-36 advantage on the boards.

Kemba Walker had a rough shooting night, going 0 for 6, but he finished with 11 assists and a pair of free throws. The Celtics made plenty of shots without the star point guard, finishing 45 for 86 from the floor while playing without Gordon Hayward (sore left foot) and Marcus Smart (left eye infection). 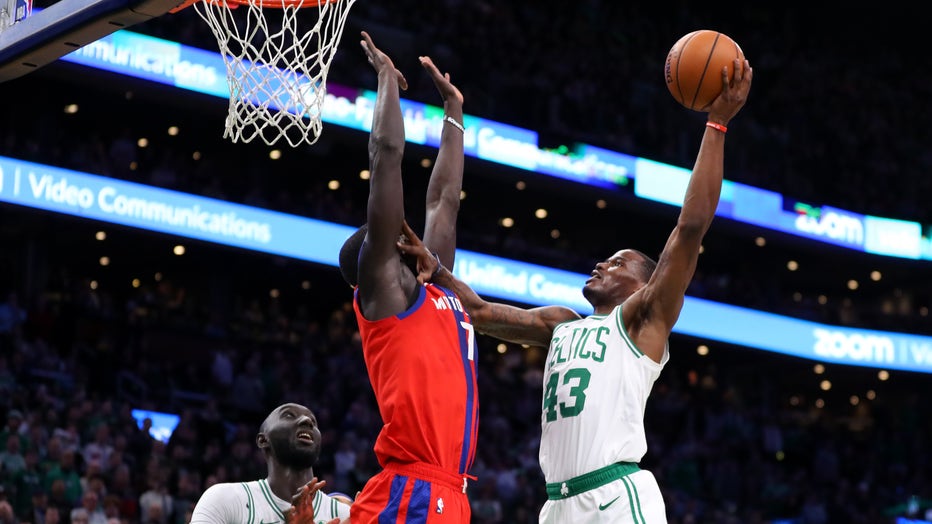 BOSTON, MASSACHUSETTS - DECEMBER 20: Javonte Green #43 of the Boston Celtics takes a shot over Thon Maker #7 of the Detroit Pistons at TD Garden on December 20, 2019 in Boston, Massachusetts. The Celtics defeat the Pistons 114-93. NOTE TO USER: User

Detroit stayed relatively close in the first half, but could not overcome committing 25 turnovers and Boston’s dominance inside as the Celtics outscored the Pistons in the paint 58-34.

The Pistons trimmed a 14-point lead down to six late in the second quarter, but Boston quickly regained control.

Brown hit back-to-back 3-pointers, then another from beyond the arc while drawing a foul with 1.1 seconds left in the second quarter. Brown hit the free throw to help the Celtics to a 60-48 halftime lead.

Boston kept up the pace in the third quarter, outscoring Detroit 31-21 while taking advantage of seven more turnovers by the Pistons.

Boston carried a 91-69 lead into the final period, and the reserves took it the rest of the way. Walker, who was 0 for 5 through the first three periods, missed one more shot before joining the rest of the starters on the bench.

As Boston continued to expand the lead in the third quarter, some Celtics fans started chanting “We want Tacko!” - hoping rookie center Tacko Fall would get some playing time late in a blowout.

They got their wish with 4:31 left in the fourth. Fans roared when Fall got up from the bench and removed his warmups, and then entered just the second game of his career. He quickly committed a foul - although the fans were certain it was a clean block.

Pistons: Griffin was out for the second time in three games. ... Detroit came close to matching its season high of 29 turnovers from Oct. 28 against Indiana.

Celtics: Kanter hadn’t pulled down more than 13 rebounds in his first season with Boston. ... Williams’ previous scoring high was 10 points against the Knicks on Nov. 1. ... Coach Brad Stevens said an MRI of Hayward’s left foot came back clean. Hayward missed his second straight game and was replaced in the starting lineup by Semi Ojele.