Vladimir Guerrero Jr. and Bo Bichette had RBI doubles for the Blue Jays, who have won 12 of 15 overall after taking three of four from the Tigers. Toronto (57-45) is a season-high 12 games above .500 for the third time, and the first time since the Blue Jays were 37-25 on June 15.

Berríos (8-4) allowed three hits in seven innings, including a solo home run to his brother-in-law, Javier Báez. Berríos walked one and struck out six. 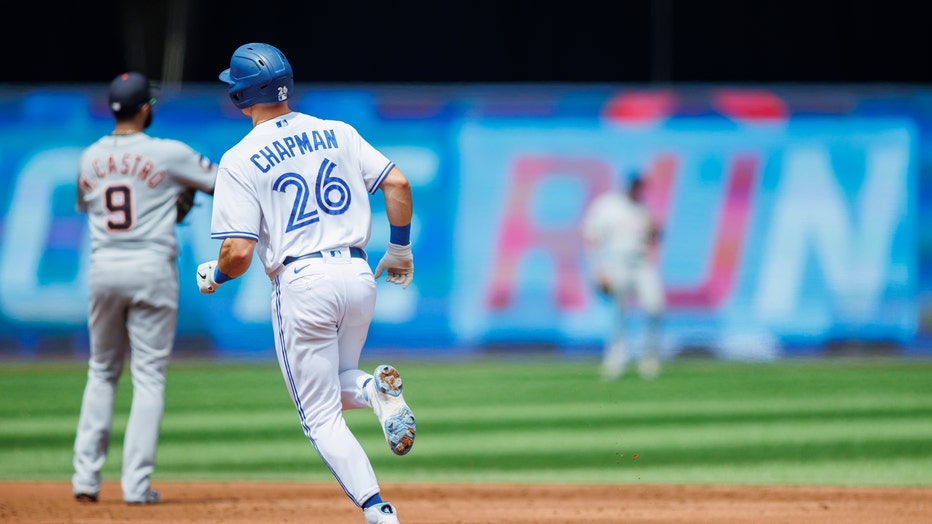 TORONTO, ON - JULY 31: Matt Chapman #26 of the Toronto Blue Jays runs out a two-run home run in the second inning of their MLB game against the Detroit Tigers at Rogers Centre on July 31, 2022 in Toronto, Canada. (Photo by Cole Burston/Getty Images)

"He was landing his curveball. He was spotting his fastball up," interim manager John Schneider said. "He was on."

Tim Mayza worked the eighth and Jordan Romano finished for his AL-leading 24th save in 27 chances, striking out Miguel Cabrera to end it with the fans in the crowd of 40,298 on their feet.

The Tigers made four errors Sunday, giving them seven in the four-game series. Left fielder Robbie Grossman dropped Guerrero’s line drive in the third, Báez dropped Bichette’s pop fly in the fourth, Hill made an errant pickoff throw to first in the fifth and Báez made a throwing error on Teoscar Hernández’s grounder in the eighth.

"It was inexcusable," manager A.J. Hinch said. "Those are sloppy plays that need to be made."

Hinch disputed the suggestion that the upcoming trade deadline is affecting his team’s focus.

"These are big boys. They can make plays," Hinch said.

None of Toronto’s runs were unearned.

Chapman opened the scoring when he connected off right-hander Garrett Hill in the second inning, his 20th this season and fourth this series. Chapman homered twice Thursday and went deep again Friday.

"I don’t really know what to do against him right now," Tigers catcher Tucker Barnhart said.

Báez and Berríos battled in a first-inning at-bat that included several deep foul drives, one into the upper deck. Báez thought he’d walked on ball three before taking a curve outside on the ninth pitch of the at-bat.

"Their holiday dinners will probably revolve around these at-bats," Hinch said.

It was the first time Berríos had allowed a hit against Báez, who came in 0 for 5 against his brother-in-law.

"I already texted him and told him he got me," Berríos said.

Báez cut Toronto’s lead in half with his leadoff homer in the fourth, his 10th, but Guerrero and Bichette drove in runs as Toronto chased Hill with a two-run fifth.

Tigers: RHP Matt Manning (shoulder) is expected to be activated off the injured list to start against Minnesota on Tuesday, Hinch said. Manning last pitched for Detroit April 16 at Kansas City.

Blue Jays: OF George Springer (right elbow) sat for the second time in three games. Springer also sat out Friday. He started at DH Saturday. … RHP Alek Manoah felt fine after playing catch before the game, Manoah left Friday’s start in the sixth after taking a comebacker off his right elbow.