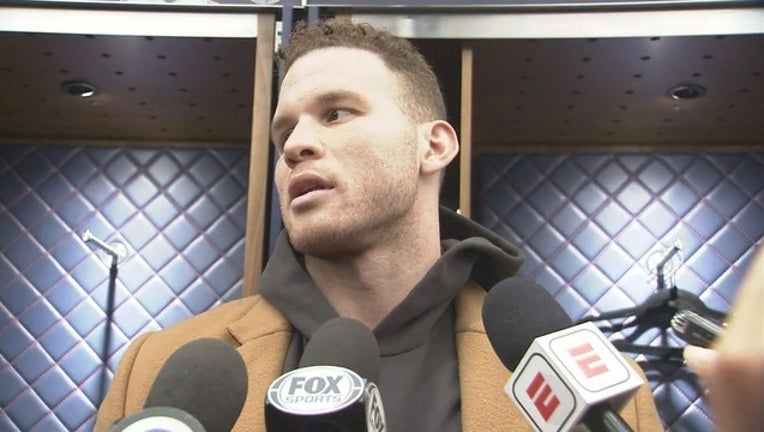 DETROIT (AP) - Blake Griffin's unbeaten run in Detroit ended with a thud - against the team that traded him.

Lou Williams scored 26 points, and the Los Angeles Clippers handed Griffin his first loss with the Pistons, beating Detroit 108-95 on Friday night. The Pistons had won five in a row, with Griffin playing in four of those games, but the Clippers still look OK after trading the star forward to Detroit last week.

"We didn't, obviously, play the way we wanted to. I didn't play the way I wanted to," Griffin said. "But that's the NBA. We had a good five-game run, and we'll get back to work tomorrow."

It was a bit of an off night for Griffin, who scored 19 points but shot 7 of 19 from the field. The whole Detroit team faded down the stretch. The Pistons led 80-77 after three quarters but scored only 15 points in the fourth.

Tobias Harris scored 12 points and Avery Bradley had 10. They were the key players the Clippers acquired in the deal that sent Griffin to Detroit.

Austin Rivers scored 16 points for Los Angeles in his first game back from a right ankle injury. The Clippers have won 11 of 15 and are 3-1 since trading Griffin.

Bradley and especially Harris received ovations from the Detroit crowd when they were introduced in the starting lineup, but when the teams came out for the opening tip, there wasn't anything too unusual in terms of pregame greetings. In fact, Griffin and Bradley were hit with simultaneous technical fouls in the first quarter after battling for rebounding position.

There were five technicals in the game.

"It's an important game for both teams. So, you'll see a lot of that the rest of the season probably because it's playoff run for everybody," Clippers coach Doc Rivers said. "I didn't think it was that much stuff with Blake and our guys. I thought both teams wanted to win the game."

After the game, Griffin headed straight toward the locker room and did not stick around to commiserate on the court. The highlight of his night was probably when he blocked Montrezi Harrell's dunk attempt in the second half.

"Obviously, he played with a lot of emotion tonight, and rightfully so," Austin Rivers said. "I think anybody can understand, when you play against your old team, that's what everybody does - let alone, a week after it happens, and obviously, the way everything happened. So it was weird playing against him."

Harris and Bradley were still featured among the vertical banners attached to the outside of the arena in Detroit. It may have felt odd being back so soon after the trade, but they were on the winning team.

"It's like seeing your ex-girlfriend for the first time, with her new man. You've got a new girl, so ..." Harris said. "At lot was put into, obviously, the trade, this game, so we wanted to come out and handle business."

Andre Drummond of the Pistons and DeAndre Jordan of the Clippers came into the game ranked 1-2 in the NBA in rebounding. They matched each other with 17 rebounds apiece, but Los Angeles had a 57-40 advantage as a team.

"The most disappointing thing was there is no way we should get outrebounded by 17," Detroit coach Stan Van Gundy said. "That just shouldn't happen."

Clippers: G Milos Teodosic (right foot) missed the game. ... Austin Rivers had missed the previous 18 games but was solid in his return, shooting 7 of 13 from the field.

Pistons: Jameer Nelson and James Ennis, who were acquired in trades Thursday, did not play. Ennis was not able to make it to Detroit because of snowy weather in Michigan. ... Reggie Bullock, another ex-Clipper, scored 19 points. He was drafted by Los Angeles in 2013 and played 68 games for the Clippers.