GREENVILLE, S.C. - Mike Krzyzewski’s emotions began to flow with a few seconds left on the clock, when it was finally certain Duke would extend his last NCAA Tournament run.

He whirled around to face the section where his family was sitting behind him and extended both arms to point their way in celebration.

Krzyzewski's retirement will be on hold for several more days at least. The Blue Devils survived a tense finish to beat the Spartans 85-76 on Sunday, earning another trip to the Sweet 16 and giving their coach his latest milestones.

Trailing by five near the 5-minute mark and with their season in peril, the Blue Devils (30-6) responded with one big shot after another, a resilient performance amid uncommon pressure. 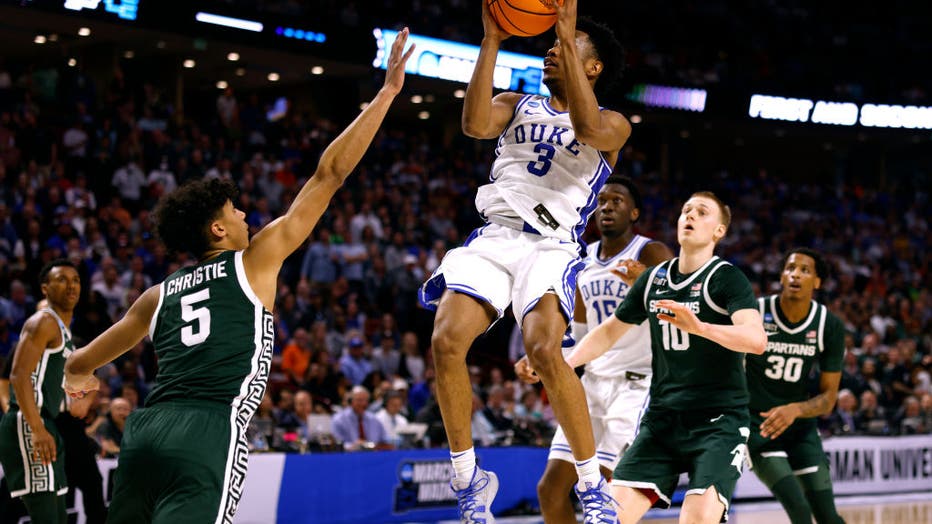 GREENVILLE, SC - MARCH 20: Jeremy Roach #3 of the Duke Blue Devils goes to the basket against the Michigan State Spartans during the second half in the second round game of the 2022 NCAA Men's Basketball Tournament at Bon Secours Wellness Arena on Ma

It was almost too much for Krzyzewski, who struggled to find the right words to start his postgame news conference.

"You guys were terrific, man,"

"It had nothing to do with coaching in those last four or five minutes. It all had to do with heart and togetherness. They followed their hearts and God bless them — we're in the Sweet 16."

Star freshman Paolo Banchero scored 19 points and muscled in the go-ahead drive through contact with 2:05 left, putting the Blue Devils ahead to stay in the record-extending 1,200th win of Krzyzewski’s career. Duke reached the Sweet 16 for the 26th time under Coach K, who announced last summer that his 42nd season with the Blue Devils would be his last.

Those coaching milestones came against his longtime friend and frequent rival. The 75-year-old Krzyzewski — who has five NCAA titles and a record-tying 12 Final Four appearances — improved to 13-3 against the 67-year-old Izzo, who won the 2000 national championship and has reached eight Final Fours.

Krzyzewski will continue his push for a career-capping championship when the second-seeded Blue Devils head to San Francisco to third-seeded Texas Tech on Thursday in the West Region semifinals.

The Blue Devils shot 61% after halftime and 57% for the game, and they needed every bit of that production to survive against the seventh-seeded Spartans (23-13) in a riveting fight to the final minute.

"It’s the NCAA Tournament, our season’s on the line every single game," Banchero said. "That’s really all that needs to be said. ... We were like, ‘We’ve got four minutes: we can either lay down or turn it up.’"

The 6-foot-10 Banchero had the biggest basket,

"I think they showed their truest colors," Izzo said.

"An average team without a lot of heart might've just drifted into the sunset. And I thought they reached down in Mike Krzyzewski fashion, and did an unbelievable job of kind of taking it at us. We just didn’t have enough left."

Even more impressive, Duke did it all with freshman starter A.J. Griffin sidelined the last 8:24 with an apparent left ankle injury. The Blue Devils closed out the game by outscoring the Spartans 20-6.

Gabe Brown scored 18 points to lead Michigan State, while Tyson Walker scored all 13 of his points after halftime. The Spartans shot 42% for the game and had only one field goal over the final 2 1/2 minutes in possession-by-possession fight as Duke made its move.

"I want to be proud, but at the same time, mad that we're not playing another night," said Spartans big man Marcus Bingham Jr., who had 16 points and 10 rebounds. "I think the guys went out there and played hard from the first half into the second half. We fought. Just some situations, we just didn’t pull through."

Michigan State: Izzo, who won the 2000 NCAA title and has eight Final Fours in 27 seasons, acknowledged all the "weird emotions" sure to come for both teams in this game. His team gave itself a chance but couldn't slow the Blue Devils' late push. Izzo fell to 2-4 against Krzyzewski in the NCAA Tournament.

"I'll always pull for Mike," Izzo said. "I think he's done some things that will go down in the lore of basketball. You can remember this game in a lot of ways. My way of remembering it won't be quite as enjoyable, but it will be respectful."

Duke: Banchero, a top NBA prospect, and 7-foot-1 Mark Williams (15 points, eight rebounds, five blocks) overpowered the Spartans — who have plenty of length themselves — and showed how good the Blue Devils can be in the front court. Duke was balanced with five double-figure scorers, including Wendell Moore Jr. (15 points), Roach (15) and Trevor Keels (12) — all of whom hit key shots late.

"I knew once we got our foot in the door," Moore said, "there was no looking back from there."

The Blue Devils meet the Red Raiders, who own KenPom's No. 1-rated defense by surrendering 84.6 points per 100 possessions this year.