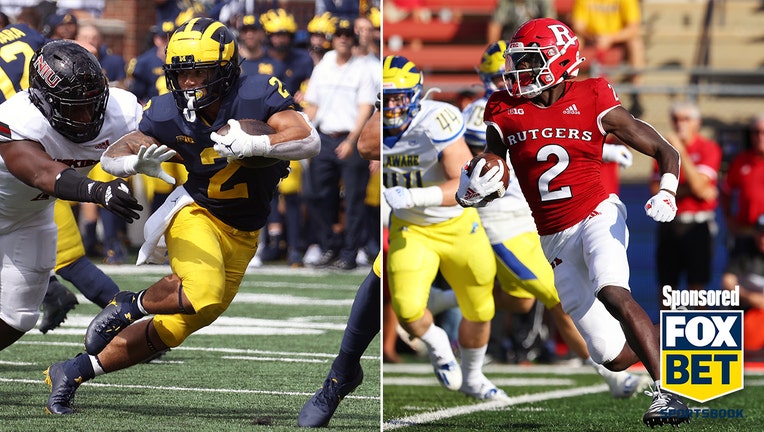 After another profitable week in this space, there’s nervous anticipation about Week 4 because the market has tightened up with three weeks of data on most teams.

One of the things I do every week after I zero in on a game is to look at the opponents for next week. Sandwich spots are a real thing in college football when you’re dealing with 19-, 20-, and 21-year-olds.

That nearly got me to go against Alabama and take the points with Southern Mississippi this week, with a massive game at home next week for the Tide against Lane Kiffin and undefeated Ole Miss.

I even pondered winless Arizona in Oregon, with the Ducks traveling to occasional-nemesis Stanford next week.

Ultimately, I decided on these five best bets. Below are two double-digit favorites, which are tough to stomach anytime, much less in conference play, and why I like the Fighting Irish. Odds courtesy of FOX Bet.

Quietly, Jim Harbaugh and the Wolverines are pummeling teams. With low expectations this season, they're the 4th or 5th most talked-about team in the Big Ten.

I watched Michigan closely when I took Washington two weeks ago - terrible idea; I was a week early on the Huskies - and the Wolverines methodically pulled away.

Michigan leads the country in rushing yards per game (350), while Rutgers is simply taking advantage of bad teams turning the ball over, as they lead the nation in turnover margin (+8).

Last year, the Wolverines needed triple overtime to beat the Scarlet Knights, so there's no sneaking up here. This game features a large spread for a conference matchup vs. an undefeated team - especially with Wisconsin looming next week for the Wolverines - but beware of grabbing Rutgers like the public is doing.

Two defensive backs are suspended for the Scarlet Knights after a paintball incident led to an arrest. Of the two, Max Melton is an impactful starter who already has two interceptions, a blocked punt, and a fumble recovery.

Look for Michigan to pull away in this one.

Oklahoma hasn't looked great early in the season. The Sooners haven't covered against Tulane and Nebraska, and the Spencer Rattler Heisman campaign is sputtering … which is why this is a fantastic time to back Oklahoma.

The line has come down from 19.5 to 16.5, which is absurd because West Virginia just knocked off ranked Virginia Tech in a rivalry game and will be celebrating all week on campus.

I expect a letdown from WVU on the road in Norman. The Mountaineers are 0-10 on the road against their last 10 ranked opponents.

West Virginia's been thoroughly dominated in most of their last five meetings against the Sooners. Except for a 59-56 thriller in 2018, Oklahoma has won the other four by 20, 28, 28, and 38.

In 2019, a week after the Sooners squeaked by Texas in the Red River Shootout, they came back the next week and smashed West Virginia by 38.

Get ready for a Jack Coan revenge game!

The most exciting game of the weekend is the one in which I lean to the underdog. I'm not sure why so many people are on the Badgers in this spot.

Indeed the bye week is helpful, but Wisconsin didn't look sharp against Penn State in the home opener (three turnovers, 1-4 in the red zone), and so what if they beat Eastern Michigan? The Badgers don't have a touchdown pass through two games.

On the other hand, the Irish have been through the gauntlet, and it's not going to get any easier. Notre Dame started their season against Florida State (which was expected to be a solid team), then faced an upset-minded Toledo, followed by a pesky Purdue team. Now comes a trip to Soldier Field, and then next week, they face a massive test against undefeated Cincinnati. After that, it's Virginia Tech and USC.

This game features two inept offenses colliding, and I trust the QB facing a team he spent four years alongside.

I anticipate a low-scoring matchup, with the total going down through the key number of 47.

Look for Notre Dame money to show up on game day, as sharp bettors gravitate toward Brian Kelly, the underdog (16-9, 64 percent) in the regular season.

Fresh off an impressive 38-17 win over Miami on the road, Michigan State returns home to face a Nebraska team that will be drained from its near-upset against rival Oklahoma.

The Huskers have won their last two meetings vs. the Spartans but haven't won in East Lansing since 2012.

The good news for Nebraska is that it will return two defensive linemen from injury, just in time to face Kenneth Walker, the MSU RB who is 5th in the country at 6.82 yards per carry.

If the Huskers can bottle up Walker, they'll have a chance to pull the upset, as the secondary prevents explosive plays (only two plays of 30+ yards allowed this season).

But unless Adrian Martinez and the offense can consistently move the ball - something they've done quite well; 35th in yards per play - the Spartans should be able to play keep-away and win in a low-scoring game.

The SEC has the best teams, the best players, and usually, high-scoring games. But the under here is appealing.

The Gators have dominated this series, winning four straight, three by double digits. But Florida is coming off a heartbreaking narrow loss to mighty Alabama, which they trailed early, 21-3.

Between the come-down from that game, a mini brewing QB controversy, and with the Vols having a surprisingly solid defense, this feels like a sloppy slugfest.

Tennessee, which has been a dumpster fire of a program for the better part of a decade, is somehow 7th in defensive yards per play this season. That includes a close loss to Pittsburgh, a game in which the Vols committed 13 penalties for 134 yards and turned the ball over three times.

If Tennessee can avoid that type of meltdown, there's a chance the Vols catch the Gators napping in this spot.

If you don't have the appetite to stomach this full game spread, take a look at lines geared toward the Vols covering in a low-scoring first half.

As for my bet, I'll be on the under in this one.

On a side note, just how important is getting the full game best number? This total opened at 67.5 and has plunged to 63.5 since.

Pick: UNDER 63.5 combined points by both teams at FOX Bet