Artemi Panarin had a goal and assisted on two others, including Copp's winner, as New York swept back-to-back road games beginning with Tuesday night's big victory over division rival Pittsburgh.

Chris Kreider scored his 46th goal overall and NHL-high 24th on the power play. Ryan Reaves and Filip Chytil also scored for the Rangers, while Alexandar Georgiev made 22 saves. 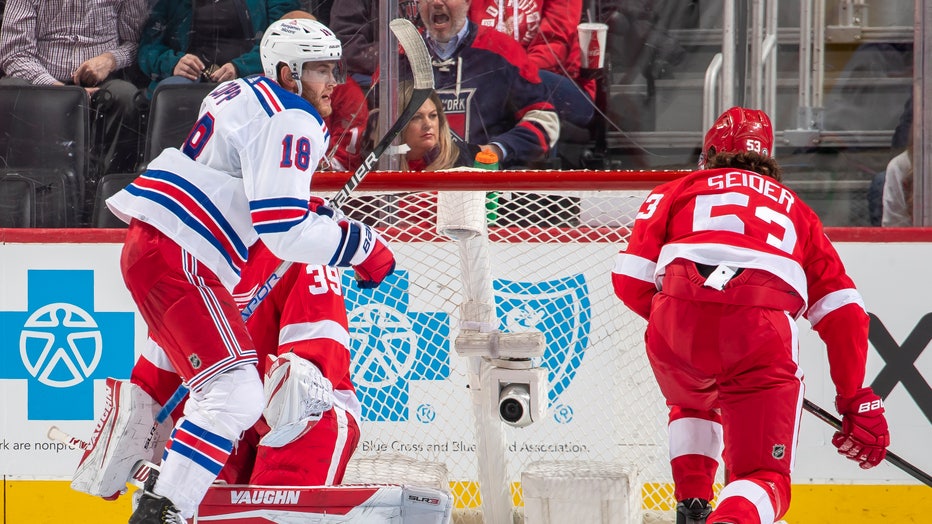 DETROIT, MI - MARCH 30: Andrew Copp (18) of the New York Rangers celebrates as teammate Chris Kreider (20) (not pictured) scores a goal off Moritz Seider (53) of the Detroit Red Wings skate during the third period of an NHL game at Little Caesars Are

Reaves scored an unassisted goal after a Detroit turnover 3:23 into the game. Rasmussen tied it midway through the first period and Vrana scored on a power play, his seventh goal in 11 games since returning from shoulder surgery. Chytil evened it 2-all before the period ended by deflecting Patrik Nemeth's shot from the point.

Bertuzzi's power-play goal 29 seconds into the second was answered by Panarin at 12:15. Panarin scored his 18th goal from the right circle to tie it 3-apiece.

Erne scored his fifth goal this season and first in 25 games at 5:56 of the third to put the Red Wings back on top, 4-3. He fired in a rebound of Marc Staal's shot.

Kreider's shot from the right side with 3:38 left in regulation tied it again.

NOTES: The Rangers have won 11 games this month, their most ever in March. ... Panarin has at least one point in 13 of 15 career games against the Red Wings. ... The Rangers have played 37 road games, most in the NHL. ... Detroit D Danny DeKeyser, who missed the previous 10 games due to an upper-body injury, had an assist in the first period.