In two weeks, Michigan will play the Buckeyes on the road with the Big Ten East Division title and likely spot in the College Football Playoff at stake.

Michigan was in control from the start against the Cornhuskers (3-7, 2-5) and opened with a 12-play, 80-yard drive that Corum capped with a 2-yard run for his 18th touchdown. 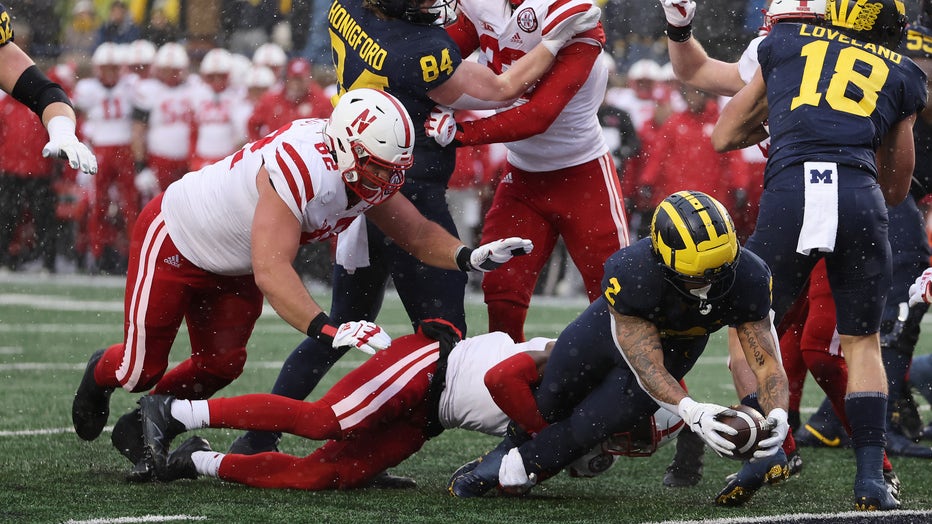 ANN ARBOR, MICHIGAN - NOVEMBER 12: Blake Corum #2 of the Michigan Wolverines dives for a first half touchdown while playing the Nebraska Cornhuskers at Michigan Stadium on November 12, 2022 in Ann Arbor, Michigan. (Photo by Gregory Shamus/Getty Image

The Heisman Trophy candidate had 100-plus yards rushing — in the first half — for the seventh straight game and pulled within a game of the school record set by current running backs coach Mike Hart.

J.J. McCarthy was 8 of 17 for 129 yards with two touchdown passes. McCarthy also ran for a 3-yard score late in the third, putting Michigan ahead 24-3.

Nebraska started quarterback Chubba Purdy in place of Casey Thompson, who missed a second straight game with an elbow injury, and he left the game in the second quarter after appearing to injure his right ankle.

Logan Smothers filled in and after fumbling a snap, the Cornhuskers settled for a field goal and 14-3 score.

Nebraska: The once-proud program has lost 21 straight games against Top 25 opponents, dating to 2016, and has not knocked off a top-five opponent since 2001.

Michigan: The passing game has a lot of improving to do, and not much time to pull it off, to improve the team's chances of winning at Ohio State for the first time since 2000.

Nebraska: Hosts Wisconsin and plays at Iowa to end the season.

Michigan: Plays No. 21 Illinois, which will likely fall out of the AP Top 25 after losing to Purdue, in a final tuneup before traveling to Ohio State.