There were 106,263 of them there on Saturday, and they enjoyed every minute of Lombardi’s return.

Playing for his new school, Northern Illinois, Lombardi threw for 46 yards and an interception in a 63-10 loss. He did throw for one touchdown, but that came with the Huskies down by 60 points in the fourth quarter.

"We were overmatched - that’s a very, very good defense, and a very, very good team," said Lombardi, who threw for 323 yards and three touchdowns in last year's win. "They run a completely different scheme than a year ago, and they are definitely the best team we're going to play this year." 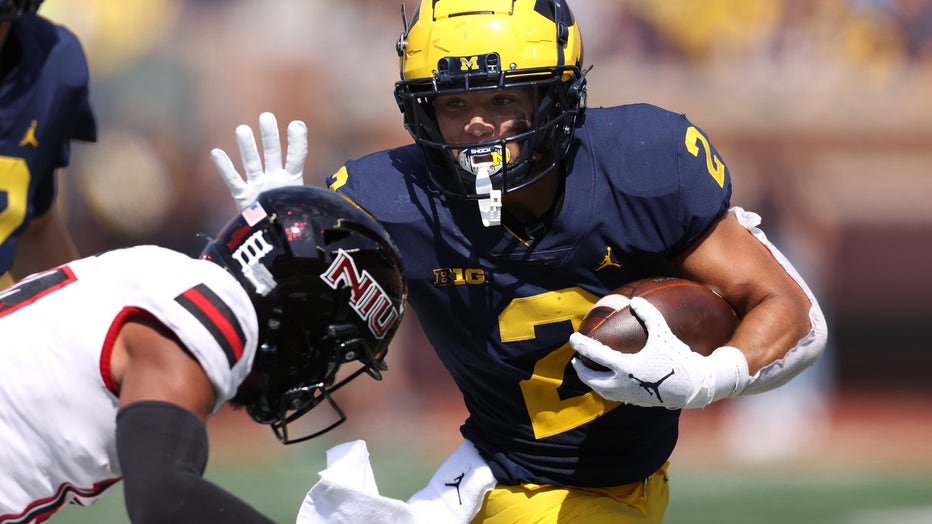 ANN ARBOR, MICHIGAN - SEPTEMBER 18: Blake Corum #2 of the Michigan Wolverines looks to get around the tackle of Eric Rogers #12 of the Northern Illinois Huskies during the first halfat Michigan Stadium on September 18, 2021 in Ann Arbor, Michigan. (P

The Wolverines (3-0) scored touchdowns on their first nine drives, eight of them on the ground. The 10th drive also included a touchdown run, but it was called back for a holding penalty and Michigan turned the ball over on downs. The Wolverines never punted.

"We were really, really good today, but we know there's always room to improve," said Blake Corum, who rushed for 125 yards and three touchdowns. "When we say we want to play a perfect game, that means going through today's film and fix all of those small mistakes."

Northern Illinois got its touchdown with 8:28 to play.

"I'm not going to take anything away from Michigan," Huskies coach Tom Hammock said. "They beat us soundly in all three phases of the game. That's a better football team than us, and that's the bottom line."

The Huskies (1-2) kicked a field goal on their second possession of the game, but it was already clear they were in major trouble.

"We've given up 113 points in our last two games, and that's a serious problem," Hammock said. "It's easy to say that's because of the competition we are playing - that's a team built to beat Ohio State - but we need to get better."

Michigan scored short rushing touchdowns on its first four possessions, two by Hassan Haskins, to take a 28-3 lead in the second quarter.

The Wolverines changed up a bit on the fifth possession, scoring on an 87-yard pass from Cade McNamara to Cornelius Johnson - the third-longest passing play in school history - to lead 35-3 at the half.

The Wolverines switched quarterbacks at halftime, putting in J.J. McCarthy, but he hadn't thrown a pass when Corum scored on a 49-yard run to increase the margin to 42-3. Michigan used six quarterbacks in the game.

"This was a very inspiring day, because this team is playing so hard and putting forth really, really tremendous play," Michigan coach Jim Harbaugh said. "We're getting used to be being this good."

Michigan's a lot better than a Mid-American Conference team that just gave up 50 points to Wyoming. That shouldn't be a surprise, but the Wolverines have had some tough times against the MAC in recent years.

The Huskies won their opener at Georgia Tech and led Wyoming in the last two minutes, but the Big House was a step too far. Even on a sleepy Saturday - the late-arriving Michigan student section didn't show up at all - Northern Illinois was overmatched in every part of the game.

MAYBE A LITTLE MORE THAN NOTHING

Corum said the team wasn't counting any accomplishments before the Big Ten season starts next Saturday.

"We haven't really done much yet," he said. "We can celebrate this for today, but tomorrow is all about Rutgers and the Big Ten season."

Harbaugh, though, was willing to give his players a little more credit for their 3-0 start.

"I certainly wouldn't say they haven't done anything - they've played very well for three games to get us ready for the Big Ten," he said. "But yes, our focus is always on winning that Big Ten championship. That starts now."

NOT A NAIL-BITER THIS WEEK

The Huskies were involved in two dramatic finishes in the first two weeks of the season, scoring in the last minute to beat Georgia Tech 22-21 before losing 50-43 to Wyoming on a touchdown with 1:35 to play.

While they did score the only points of the fourth quarter on Saturday, it didn't help.

"We didn't quit," Hammock said. "There's not much I can say about this game, but we did battle."

GETTING DEEP INTO THE DEPTH CHART

Not only did the Wolverines use six quarterbacks, Harbaugh thought they came close to hitting triple digits in players by the end of the day.

"One of the big thrills today was being able to use close to 106 players in the game," he said. "That's great for all the guys who have been working hard and practicing hard - getting into a game and getting the confidence that comes from seeing you belong out there."

The Wolverines are likely to move into the top 20 after taking apart a team that does have a road win against a Power Five opponent. However, the game was so lopsided, voters might have a hard time taking it seriously.