DETROIT (FOX 2) - The Detroit Lions hold the number 2 overall pick in a defensive-heavy draft and they will likely get a star who could lead the defense for years to come. Who it will be, however, has changed over the past few weeks.

Don't expect a big-name quarterback to be picked at number 2 to usurp Jared Goff as the starter. Likewise, a big wide receiver or Barry Sanders style running back isn't in this draft either.

Instead, all mocks are pointing to the Lions taking a defensive end. Particularly, one who grew up in Plymouth, Michigan, and broke out in a major way in the Big Ten last year.

Aidan Hutchinson, the 6'6", 265 lb defensive edge from Michigan, is expected to be the Lions pick at number 2. This may come as a shock as Hutchinson was believed to be the number 1 pick for the Jacksonville Jaguars  for the previous four months.

That all changed recently. Travon Walker, a 6'5", 275 lb defensive end out of Georgia, soared up draft charts. He eventually landed with the Lions for several weeks - and would be a great pick, by the way - but passed Hutchinson on most draft mocks on Monday. 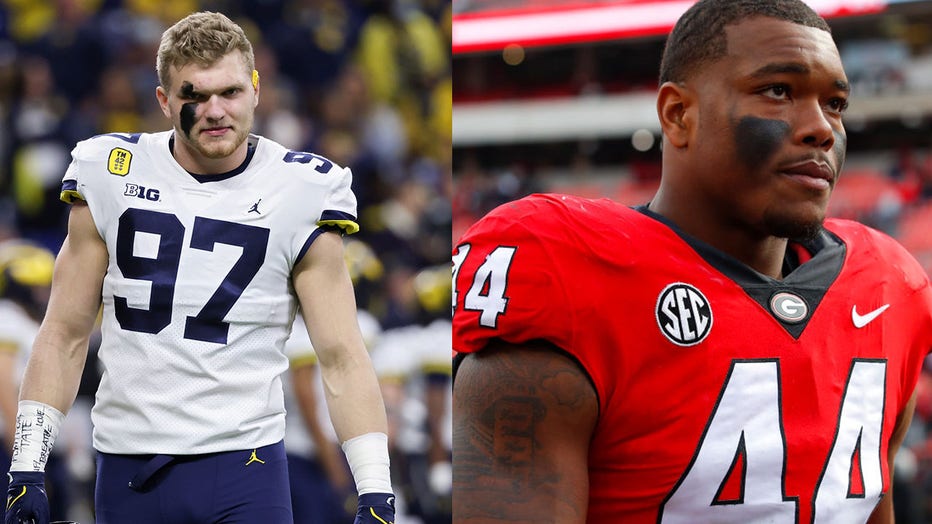 Aidan Hutchinson #97 of the Michigan Wolverines looks on before the Big Ten Championship game against the Iowa Hawkeyes at Lucas Oil Stadium on December 04, 2021 in Indianapolis, Indiana (Photo by Dylan Buell/Getty Images). Travon Walker #44 of the G

That bodes well for the Lions as Hutchinson has been seen my NFL, ESPN, and FOX Sports as the best player in the draft. How good could he be? NFL experts believe he will notch double-digit sacks every year.

Romeo Okwara last did that for the lions in 2020 when he pulled in 10 sacks. He played just four games in 2021 after an Achilles injury ended his season early.

A healthy Okwara on one side and Hutchinson on the other will create a formidable front for the Lions.

Even if Hutchinson goes to Jacksonville, the Lions will likely be extremely happy to land Walker, it just may take a little bit longer for Walker to be as productive as Hutchinson.

There's another defensive end that is expected to be taken in the first round - Kayvon Thibodeaux. The 6'5", 258 lb edge rusher from Oregon is expected to be a dynamic playmaker in the NFL. The Lions are unlikely to take Thibodeaux over Hutchinson or Walker, but it's possible.

Of course, the NFL can change quickly and the Lions could wind up with none of these players. This seems pretty unlikely but the Lions could, in theory, trade out of the number 2 spot for some combination of picks further down.