DETROIT - Corey Dickerson’s third opposite-field single of the game scored Vladimir Guerrero Jr. in the 10th inning and gave the Toronto Blue Jays a 3-2 win over the Detroit Tigers on Saturday night.

Dickerson’s bloop single down the left field line fell in front of left fielder Akil Baddoo, who fielded the ball with momentum and made a strong throw to the plate. But Guerrero just beat the sweep tag of catcher Eric Haase with a head-first slide.

"He just gives you professional at-bats and puts the ball in play," Toronto manager Charley Montoyo said of Dickerson. "You put the ball in play, and you’ve got a chance. And, of course, he got the big hit. It was a bloop, but it won the game." 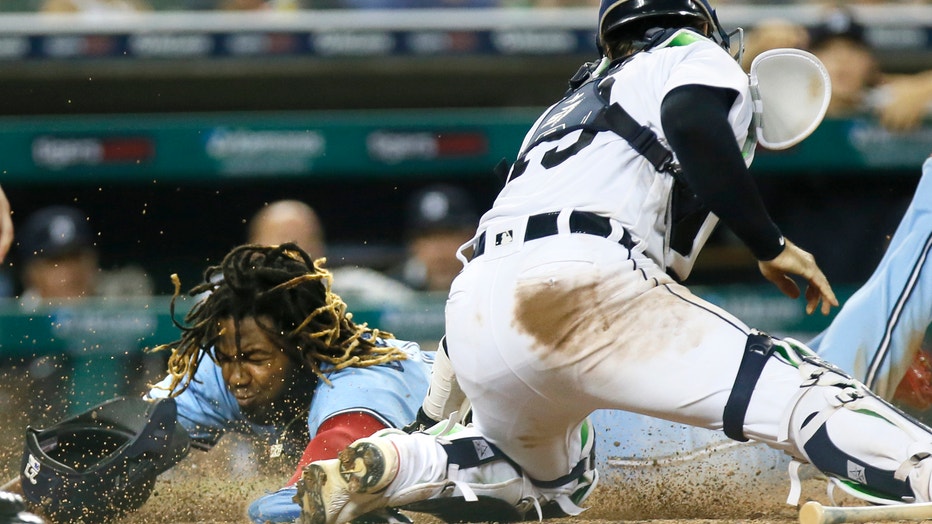 DETROIT, MI - AUGUST 28: Vladimir Guerrero Jr. #27 of the Toronto Blue Jays slides past catcher Eric Haase #13 of the Detroit Tigers to score the go-ahead run during the 10th inning at Comerica Park on August 28, 2021, in Detroit, Michigan. (Photo by

Jordan Romano (6-1) pitched the bottom of the 10th. Detroit’s mandatory runner on second was thrown out at third on a grounder to shortstop Bo Bichette. Romano then got Willi Castro to fly out and Derek Hill on a called third strike to seal the victory.

"It was easy for us sending him back because his ninth was so quick," Montoyo said of Romano, who allowed one single over two innings.

Toronto lost a two-run lead in the late innings, but managed to pull out the win. Kyle Funkhouser (6-2) pitched the 10th and took the loss for the Tigers.

Manoah had a run of 11 consecutive outs before Jonathan Schoop and Robbie Grossman opened the seventh with singles.

Manoah, whose 78 strikeouts entering the game were the most over a pitcher’s first 13 games in franchise history, got the first out of the inning with his eighth strikeout against Cabrera. He struck out Cabrera three times.

Jeimer Candelario’s RBI single to left ended the shutout bid, and Trevor Richards came on in relief with a one-run lead.

Montoyo said of both Manoah and Romano’s approach: "They’ve got that, ‘OK, I’m going to get you out' look.’ "

Haase came up with Grossman on third and one out. He hit a high chopper that Bichette grabbed on the outfield grass and fired to second for the force out. Haase just beat second baseman Marcus Semien’s relay throw to first and the tying run scored.

Blue Jays catcher Alejandro Kirk hit a 412-foot homer with two out in the sixth, giving Toronto a lead. The Blue Jays are 47-24 when scoring first this season.

Tigers reliever Tyler Alexander then allowed a walk and single, and got pinch-hitter Teoscar Hernandez to fly out to right to end the threat. Hernandez (22 homers, 84 RBI) normally bats cleanup but didn’t start.

Alexander allowed two runs in 1 2/3 innings He came on in the fifth after Alex Lange threw one shutout inning of relief.

Jose Urena, making his first start since July 17, allowed no runs on three hits over three innings and struck out two. He’d been on the injured list with a strained right groin, and was on a pitch-count limit.

Tigers manager AJ Hinch said of Urena: "He was good, I think some of the best stuff he’s thrown in a long time. Obviously, he’s been out a bit, but even before he got injured his stuff was wavering a little bit. I thought his fastball was good. I loved his changeup, his confidence in his slider. We got him up near 50 pitches (with 49), which is good, back in the big leagues.

"He’s worked his tail off to rehab and be back. We weren’t sure if he was going to be able to make up given his timeline and what he had to do to get himself right. We stole an outing away from him in the rehab process because we needed those innings in the big leagues. He came up and delivered and did his part."

Hinch indicated before the game that Alexander would get his 10th start Friday at Cincinnati, and that his status as a starter is an ongoing process. He has a 4.00 ERA as a starter, and the Tigers have won six of his seven previous starts. Alexander has a 4.66 ERA in relief, and Hinch values his versatility.

Blue Jays: Third baseman Santiago Espinal came out of the game before Detroit batted in the third inning with a right hip flexor strain. He was replaced by Breyvic Valera.

Tigers: With Sunday starter Matt Boyd coming off the injured list, the Tigers made roster room for him by optioning outfielder Daz Cameron to Toledo.

The teams conclude the three-game set Sunday afternoon, with Boyd (3-6, 3.44 ERA) scheduled to start against Toronto’s Jose Berrios (8-7, 3.70). It’s the rubber game of the series.