DETROIT - Donovan Mitchell scored 13 of his 28 points in a decisive first quarter, and the Utah Jazz held on for a 96-86 victory over the Detroit Pistons on Sunday.

The Pistons were coming off an overtime win over Phoenix on Friday night in which they rallied from a 23-point deficit, but they couldn’t climb out of another big hole. Utah scored the game’s first nine points and never trailed. The Jazz went on a 17-0 run later in the first, pushing their lead to 20 before the quarter was over. 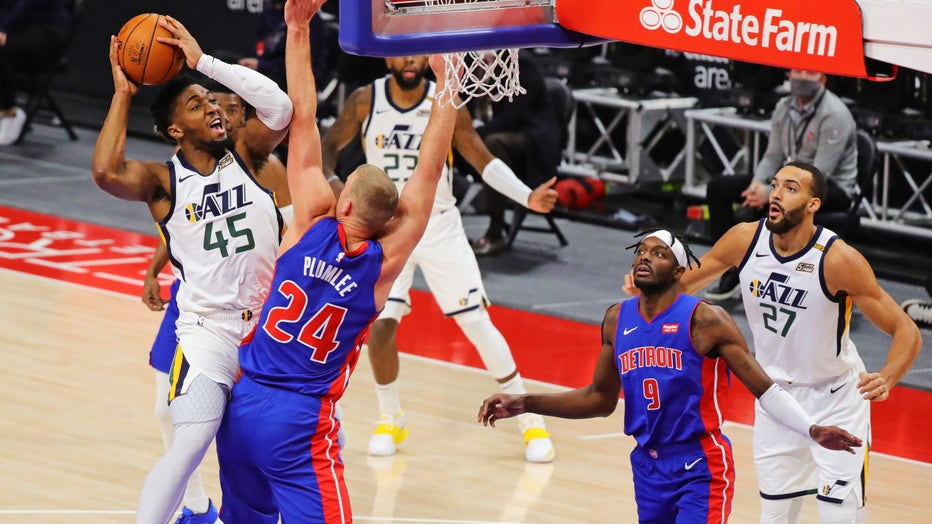 DETROIT, MICHIGAN - JANUARY 10: Donovan Mitchell #45 of the Utah Jazz drives the ball to the basket as Mason Plumlee #24 of the Detroit Pistons defends during the second quarter of the game at Little Caesars Arena on January 10, 2021 in Detroit, Mich

Jerami Grant scored 28 points for the Pistons, who cut the deficit to six late in the third quarter. They had the ball down five late in the fourth, but Rudy Gobert blocked a shot by Mason Plumlee, and Mike Conley made two free throws to make it 93-86 with 1:00 remaining.

"The offense was really good in the first half," Utah coach Quin Snyder said. "For us to be able to get stops when we weren’t clicking on offense — we won a different way this game."

Utah improved to 3-2 on its seven-game road trip. The Jazz

Detroit trailed by 15 after the first quarter, and it ultimately didn't matter that the Pistons outscored the Jazz the rest of the way.

"It goes back to our starts," Pistons coach Dwane Casey said. "You spot a team that much — 34 to 19 in the first quarter — it’s tough to survive that way."

The Jazz shot 61% from the field in that first quarter.

"It sets the tone, whether it’s offensive or defensively, when we have a start of the game like we had today," Gobert said. "They made a run, but we stayed with it."

Jazz: F Juwan Morgan missed the game because of health and safety protocols. ... F Joe Ingles' streak of 384 straight games — the longest active run in the league — was snapped when he missed Friday's game because of a sore right Achilles tendon, but he returned against Detroit. Ingles scored nine points.

Pistons: G Derrick Rose was out with left knee soreness. ... Detroit went 18 of 21 (85.7%) on free throws, setting a franchise record with its fifth straight game shooting at least 85.0%.

Although second-chance points were even at 13 per team, Snyder said his team's rebounding was important.

"I thought in the first half especially, it gave us a chance to run," he said.