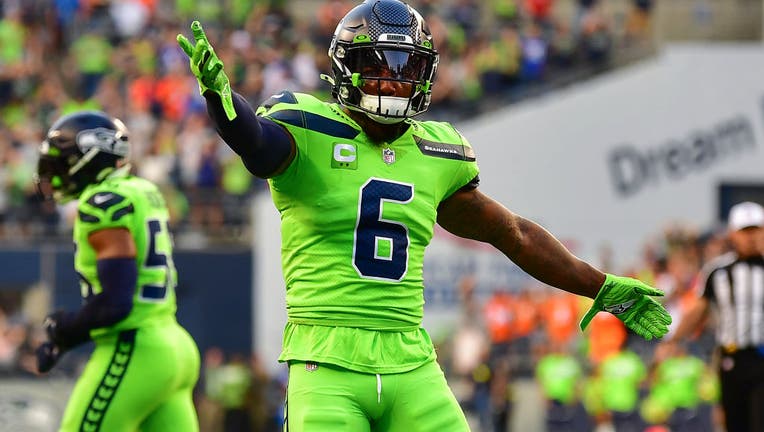 SEATTLE, WASHINGTON - SEPTEMBER 12: Quandre Diggs #6 of the Seattle Seahawks reacts during the third quarter against the Denver Broncos at Lumen Field on September 12, 2022 in Seattle, Washington. (Photo by Jane Gershovich/Getty Images)

RENTON, Wash. (AP) - Looking back on how his career started and the opportunity that was given has only strengthened the feelings Quandre Diggs has for the Detroit Lions.

Maybe not so much the coaching regime that decided Diggs was expendable and led to his trade to Seattle. But in terms of the organization as a whole, Diggs still has a deep appreciation for Detroit.

"It’s always a special place for me. Even like watching on film, just seeing the turf and seeing the fans in the stadium it brings back memories, of course," Diggs said Wednesday. "Detroit is what made me into who I am now, so I’m forever grateful for my opportunity."

Diggs will make his first return to Detroit on Sunday when the Seahawks and Lions clash. Diggs was a sixth-round pick by the Lions in 2015 and grew into being a starter for Detroit most of his final three seasons.

But there was friction between Diggs and the coaching staff led by Matt Patricia. Unexpectedly midway through the 2019 season, Diggs — one of the Lions’ team captains — was traded away to Seattle where he has thrived.

Diggs has started every game he’s played since joining the Seahawks and been a standout. In some ways, Diggs was given a second chance, something that Seattle coach Pete Carroll noted last offseason.

"You don’t know that Quandre stepped up in Detroit and said some stuff that he felt needed to be said in that program for whatever was going on. I don’t know what the story was all about, but when he did, he put himself in a light where he wasn’t in great favor there," Carroll said in March.

"We were able to give him a second shot at coming to us and look what has happened with Quandre, we just signed him to a huge deal to be a great leader in our program. He’s a magnificent player, back-to-back Pro Bowls and all of that kind of stuff. That’s just because he got a second chance and did something with it."

Not only has Diggs thrived as a player in Seattle getting selected to consecutive Pro Bowls, he’s become a locker room leader and voice, especially this year.

When Seattle traded Russell Wilson and released Bobby Wagner this past offseason, there was suddenly a void of veteran voices tasked with helping lead a team that was going to be relying on some youth as part of Seattle’s rebuild.

Diggs said he’s not a "rah-rah" kind of player, but was willing to step into the role of having more of a voice for this team.

"I’m a vet. I’m not too old, but I keep it young and I just say what I got to say and my teammates respect that," Diggs said.

This season, Diggs is doing more teaching than the past with Seattle starting a pair of rookies in key positions with Tariq Woolen at cornerback and Coby Bryant as the nickel cornerback. Throw in the loss of Jamal Adams at strong safety to a quadriceps tendon injury and it’s a lot of new faces for Diggs to try and help in Seattle’s secondary.

But there’s a balance. Diggs doesn’t want them overloaded with too much info.

"I just try to sprinkle that in on them and just let them take as much as they can take," Diggs said. "Not too much. You don’t want to overload those guys. You want to play fast and just kind of play free."

It won’t be the first time Diggs has played against his former team. That reunion took place last year when the Lions visited Seattle and were handed a 51-29 thumping by the Seahawks. Diggs had four tackles in that game, but in some ways going back to Detroit carries more meaning.

"I spent my first 4 1/2 years in the league in Detroit when they took a shot on the sixth-round guy from Texas. It might have not been me. I might not be who I am today.

"So I’m blessed. The Ford family, Jim Caldwell and that coaching staff. So I mean, that’s what made me. Before I was here with you guys, I was in Detroit making a name for myself."