DETROIT - Jake Fraley made a game-saving catch in the ninth inning, then drove in the go-ahead run in the 11th to lead the Seattle Mariners over the Detroit Tigers 9-6 on Wednesday night.

Fraley robbed Isaac Paredes of a game-ending homer with one out in the ninth, reaching well over the left-field fence to make the catch, then threw to first for an inning-ending double play.

After both teams scored one run in the 10th, Fraley gave the Mariners a 5-4 lead with a one-out RBI single in the 11th. 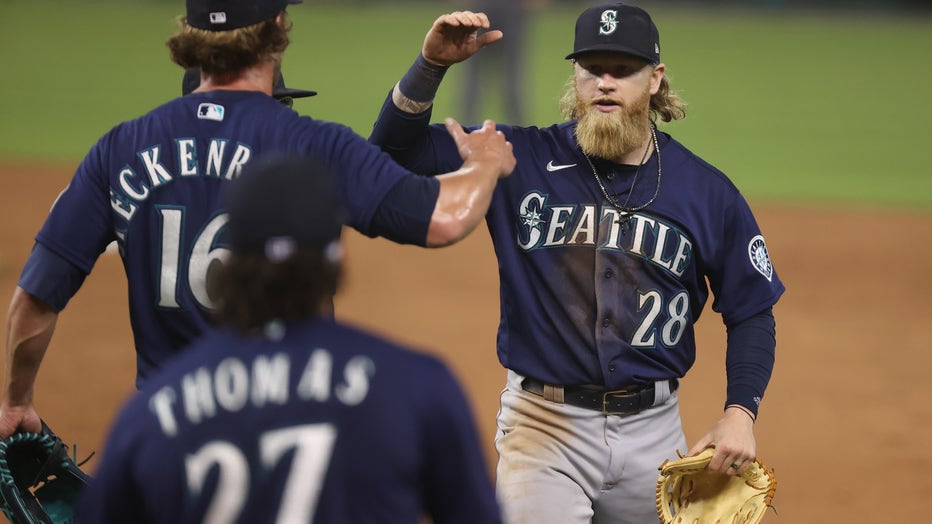 DETROIT, MICHIGAN - JUNE 09: Jake Fraley #28 of the Seattle Mariners celebrates a 10th inning catch at the fence with Drew Steckenrider #16 while playing the Detroit Tigers at Comerica Park on June 09, 2021 in Detroit, Michigan. (Photo by Gregory Sha

Daniel Norris (0-2) hit Taylor Trammell, loading the bases, and Shed Long Jr grounded into a forceout at the plate. Dillon Thomas boosted the lead to 7-4 with a two-run single for his first major league hit, and Tom Murphy hit a two-run double for a five-run lead advantage.

Robbie Grossman led off the bottom half with a two-run homer off Kenyan Middleton, who allowed a single and then retired three batters in order.

JT Chargois (1-0) won after throwing a run-scoring wild pitch in the 10th.

Both starters were aided early by spectacular catches in the opening innings. Tiger center fielder Derek Hill robbed Kyle Seager of an RBI double in the first, crashing into the fence to make a leaping catch. Hill left after the play with a sprained right shoulder.

Seattle's Chris Flexen got his help in the second when, with a runner on third and two outs, Thomas, a 28-year-old making his major league debut after 10 minor league seasons, jumped against the right-centerfield scoreboard to take extra bases away from Niko Goodrum.

Detroit built a 3-0 lead on Jonathan Schoop's sacrifice fly in the third, and Jake Rogers' homer and Grossman's RBI single in a two-run fifth.

Seager his a three-run homer in the sixth off Casey Mize.

Mariners: Thomas was the 50th player used by the Mariners this season, five more than any other major league team.

Tigers: CF Daz Cameron was removed from Wednesday's game with Triple-A Toledo and will be available if Hill goes onto the injured list.

The teams finish their three-game series on Thursday, with Seattle's Justus Sheffield (5-4, 4.77) facing a Tigers opener expected to be Tyler Alexander (0-0, 4.56).