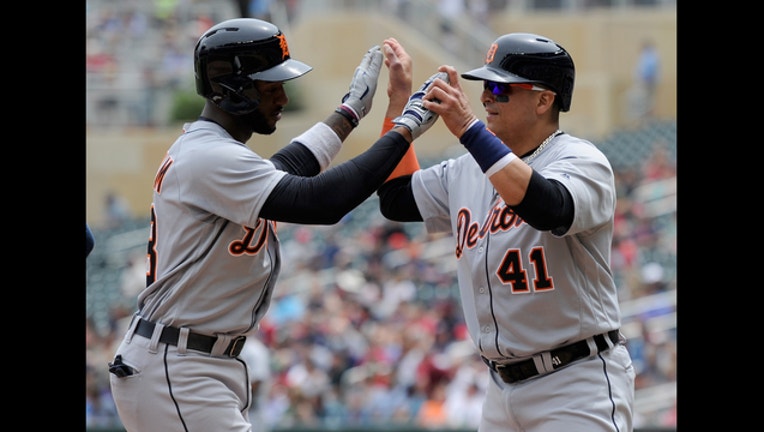 MINNEAPOLIS, MN - MAY 23: Victor Martinez #41 of the Detroit Tigers congratulates teammate Niko Goodrum #28 on two-run home run against the Minnesota Twins during the fourth inning of the game. (Photo by Hannah Foslien/Getty Images)

Fulmer felt good going into his previous outing yet allowed three runs in a no-decision during a loss at Seattle.

Fulmer allowed one run and four hits in 5 2/3 innings to win for the first time in four starts, and the Detroit Tigers stopped a five-game losing streak with a 4-1 win over the Minnesota Twins.

"Baseball's weird," Fulmer said. "Maybe it's what I needed, not having my best stuff and still going out and still giving our team a chance to win."

Niko Goodrum ended an 0-for-14 skid with a home run.

Fulmer (2-3) improved to 4-0 against Minnesota as he threw a season-high 112 pitches. He had lost his previous three starts, allowing 14 earned runs in 16 1/3 innings.

He got into too many deep counts but was able to use a dominating fastball and a slider with better break to keep hitters off balance.

Louis Coleman pitched 1 1/3 innings, Joe Jimenez got three outs and Shane Greene threw a 1-2-3 ninth for his 11th save in 14 chances, completing a five-hitter.

Goodrum, Nicholas Castellanos and Victor Martinez had two hits each for the Tigers.

Kyle Gibson (1-3) gave up three runs and six hits in six innings. He is 0-3 in nine starts since winning at Baltimore on March 31.

Martinez hit a sacrifice fly in the first, but Eddie Rosario had an RBI single in the bottom half, the first of his three hits.

"Our approach was decent but he made pitches when he had to," Twins manager Paul Molitor said. "The couple of leadoff hits we had that were turned into the double plays ... it's a little bit deflating."

Goodrum homered for a 3-1 lead in the fourth following a single by Martinez.

"Unfortunately I threw one pitch in the wrong spot at the wrong time," Gibson said. "It's frustrating when we get beat by one swing."

Brian Dozier led off the bottom of the first with a drive to deep center that missed a home run by a few inches. The ball stuck in a seam between two pads near the top of the 8-foot wall in center, and Dozier was given a double.

"I need to get our strength coach a little bit," Dozier said. "So you just wonder: Maybe a couple more biscuits in the morning would do the trick."

Called up from Triple-A May 12, Coleman has appeared in five games without allowing a run in seven innings, allowing three hits and striking out five.

"He's stepping up in big moments. We thought we had some other guys that would fit that role and maybe he can bridge the gap. If he can do that, fantastic," Gardenhire said.

Castellanos had his fourth straight multi-hit game and was 6 for 12 in the three-game series. He is hitting .324 and has 19 multi-hit games.

Tigers: LHP Matthew Boyd, who left Tuesday's game with a left oblique spasm, was feeling good and expected to get out and move around pregame, Gardenhire said.

Twins: Molitor said 3B Miguel Sano (left hamstring strain) was to play first base for Triple-A Rochester on Wednesday before potentially returning to the Twins. ... RHP Michael Pineda is to throw 15 pitches off a mound for the first time Wednesday since having Tommy John surgery last July 18.

Tigers: RHP Mike Fiers (4-3, 4.57) is to start Friday against the Chicago White Sox in the opener of a season-long 12-game homestand.