CLEVELAND - Darius Garland tied his season high with 21 points and rookie power forward Evan Mobley had 16 points and seven rebounds, leading the Cleveland Cavaliers to a 98-78 victory over the Detroit Pistons on Friday night.

Cedi Osman scored 17 points and Jarrett Allen had 11 points and seven rebounds for the Cavaliers. They led by 27 early in the fourth quarter and coasted home with their most lopsided victory of the season. Cleveland has won five of six to improve to 8-5.

The Pistons were held to a season low in points, committed 23 turnovers and have the worst record in the East at 2-9. Jeremi Grant scored 16 points, Josh Jackson added 11 off the bench, and Killian Hayes had five points, five assists and six steals. 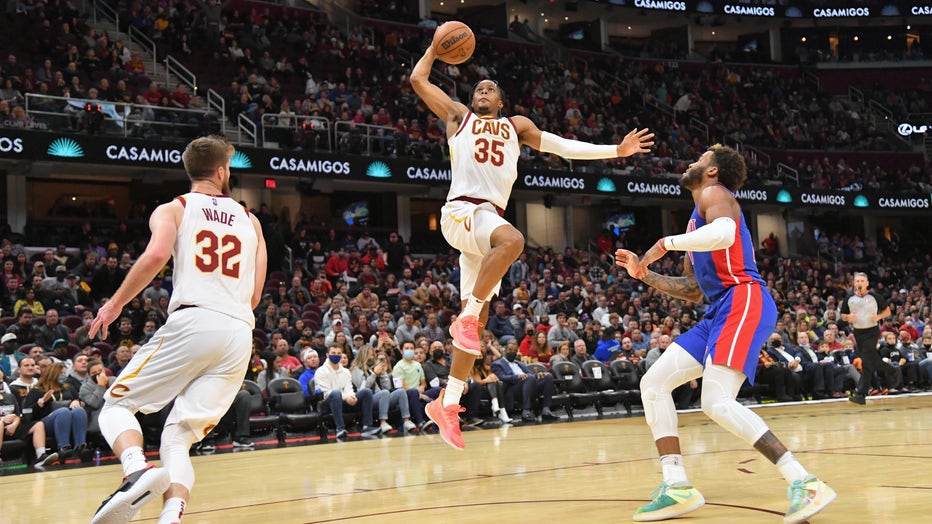 CLEVELAND, OHIO - NOVEMBER 12: Dean Wade #32 watches as Isaac Okoro #35 of the Cleveland Cavaliers dunks over Saddiq Bey #41 of the Detroit Pistons at Rocket Mortgage Fieldhouse on November 12, 2021 in Cleveland, Ohio. The Cavaliers defeated the Pist

The Cavaliers, who are off to their best start in five seasons, owned a 74-52 lead after three when Garland beat the buzzer with his fourth 3-pointer of the night.

Pistons G Killian Hayes is struggling in his first full season starting at the point, shooting 30.6% from the field while averaging 6.0 points and 2.9 assists. Coach Dwane Casey believes those numbers will improve as he gets comfortable with G Cade Cunningham. "Cade isn’t a point guard, he’s a basketball player, but him handling the ball a little bit more has helped Killian’s rhythm," Casey said. "And it will continue to improve."

Pistons: C Luka Garza, a 6-foot-11 rookie from Iowa, was recalled from the G League and was the first substitute in the game. … C Kelly Olynyk (left knee sprain) will miss at least six weeks after injuring his medial collateral ligament Wednesday at Houston. Olynyk is averaging 12.5 points and 5.3 rebounds in 10 games off the bench. "Without Kelly, it’s got to be a gang mentality on the boards for us," Casey said.

Cavaliers: F Lamar Stevens (right ankle sprain) was hurt in the first quarter and did not return. … F Kevin Love missed his sixth straight game and F Lauri Markkanen sat out his fifth as they remain in the NBA’s health and safety protocols. … G Collin Sexton (left meniscus tear) is out indefinitely after tearing cartilage in his left knee Sunday at New York. Sexton is averaging a team-high 16.0 points in 11 games.

Pistons: At Toronto on Saturday night.