Averaging 29.9 points, Antetokounmpo needs 35 points or more Sunday in the season finale at Cleveland to join Kareem Abdul-Jabbar as the only Milwaukee players to average 30 points for a season.

Brook Lopez added 17 points, and Khris Middleton had 15. The defending champion Bucks led by 32 points en route to their third straight victory. They improved to 51-30.

Rodney McGruder had a career-high 26 points for Detroit. Saddiq Bey (20) and Cade Cunningham (14) were the only starters to reach double figures.

The Pistons missed 15 of their first 16 field-goal attempts, falling behind 23-4. Detroit finished with an NBA-season-low eight points in the first quarter, falling behind by 22. 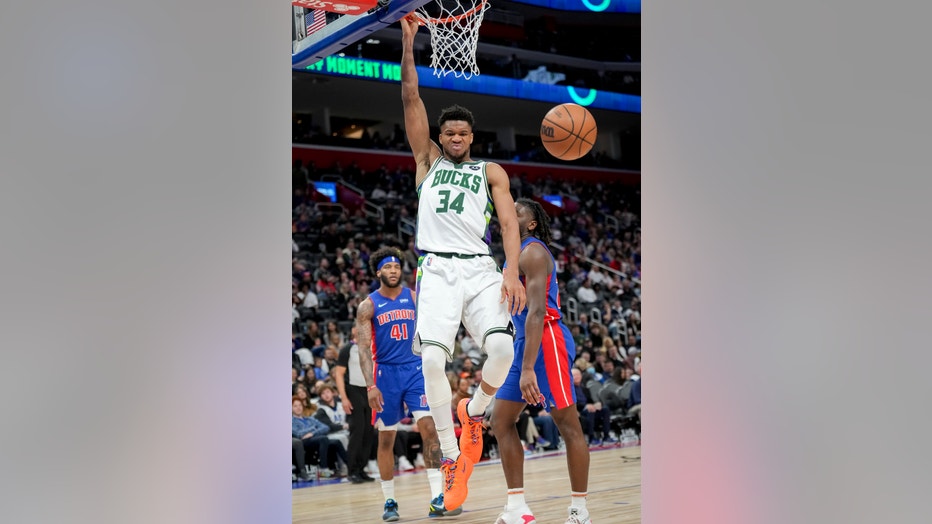 DETROIT, MICHIGAN - APRIL 08: Giannis Antetokounmpo #34 of the Milwaukee Bucks dunks the ball against the Detroit Pistons during the third quarter at Little Caesars Arena on April 08, 2022 in Detroit, Michigan. NOTE TO USER: User expressly acknowledg

Milwaukee's defense wasn't quite as sharp in the second quarter, but the Bucks still led 56-38 at the half despite only shooting 41.2% themselves.

The Bucks moved the margin to 31, 76-44, on Antetokounmpo's three-point play midway through the third quarter, and only McGruder's career night kept the Pistons from being humiliated.

Pistons: Detroit's loss guarantees it will finish with fewer than 25 wins for the third straight season — the longest streak in franchise history.

Bucks: At Cleveland on Sunday.

Pistons: At Philadelphia on Sunday.