EAST RUTHERFORD, N.J. - Jared Goff threw a go-ahead 51-yard touchdown pass to Brock Wright on fourth-and-1 with 1:49 remaining, and the Detroit Lions held on for a 20-17 victory over Zach Wilson and the New York Jets on Sunday.

Coming out of the two-minute warning, Goff looked to his left and found Wright wide open, and the tight end rumbled untouched into the end zone. The Lions went wild on the field and sideline, stunning the Jets and their fans.

But Wilson — who had an up-and-down return as the starting quarterback — and the Jets had one more chance to tie or win. 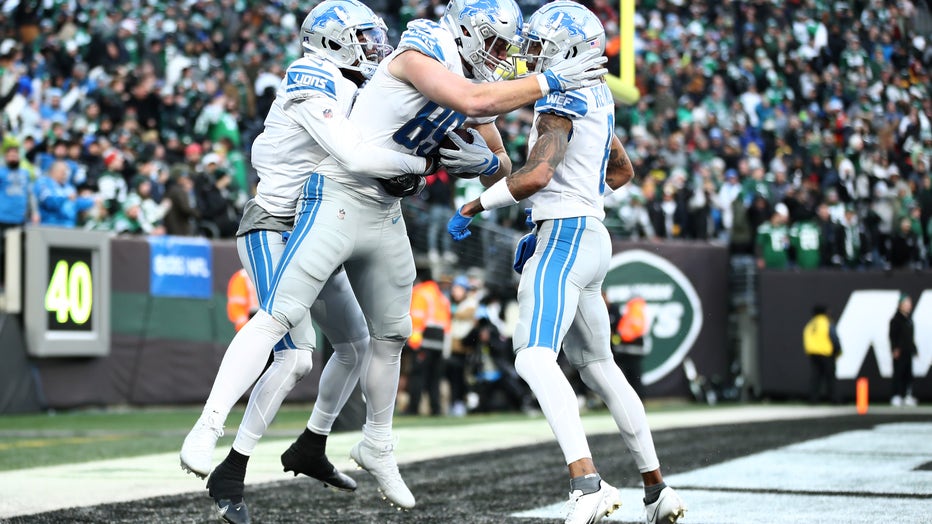 On fourth-and-the game from the Jets 40, Wilson rolled to his right and completed a 20-yard pass to Elijah Moore for a first down. Robert Saleh then called a timeout with 1 second remaining.

The Jets (7-7) sent out Greg Zuerlein for a potential tying 58-yard field goal, but his kick went wide left — sending the Lions (7-7) to their third straight win and sixth in their past seven games.

The loss further damaged the playoff hopes for the Jets, who are looking to snap an 11-year postseason drought.

It came after it appeared New York was on its way to a comeback win of its own. After Michael Badgley was short on a 54-yard field-goal attempt that would have extended Detroit’s lead, New York took over at its 44 — and Wilson and the offense took advantage.

Wilson threw a go-ahead 1-yard touchdown pass to C.J. Uzomah with 4:41 remaining. It came one play after Wilson's 1-yard quarterback sneak for a score was reversed by video review when it was ruled he was down just short of the goal line.

But New York's defense, which had been solid the entire game even without an injured Quinnen Williams, couldn't come up with a big stop.

Wilson, starting after being benched for three games, finished 18 of 35 for 317 yards with two touchdown throws to Uzomah — and a costly interception. Wilson played in place of the injured Mike White, who's dealing with fractured ribs.

After a solid first two quarters, Wilson floated a pass to Moore that Jerry Jacobs easily picked off and returned 38 yards to the Jets 15.

But New York's defense bailed out Wilson, holding Detroit out of the end zone and the Lions settled for a go-ahead 34-yarder by Badgley.

After Wilson and the Jets went three-and-out on their first possession, Kalif Raymond caught Braden Mann's punt out of the end zone, eluded a few would-be tacklers — including a diving Mann — and

Saleh and several Jets coaches and staffers ran the stadium steps a few hours before the game in honor of late assistant coach Greg Knapp.

Knapp was on Saleh's staff when he died on July 22, 2021, when he hit by a distracted driver while riding his bicycle in California. Several teams around the NFL, including the Cleveland Browns on Saturday, are running stadium steps — one of Knapp's pregame rituals — to raise awareness for distracted driving and raise funds for the The Coach Knapp Memorial Fund.

The family of the late Dennis Byrd served as honorary Jets captains for the coin toss. Byrd played for the team from 1989 until 1992, when he was paralyzed during a collision with a teammate during a game. Byrd eventually was able to walk again, but was killed in a car accident in Oklahoma in 2016.

Jets: WR Denzel Mims left with a concussion in the first quarter and didn't return. ... WR Jeff Smith hurt a knee in the fourth.

Lions: Travel to Carolina to take on the Panthers next Saturday.

Jets: Have a quick turnaround and face Trevor Lawrence and the Jacksonville Jaguars at home Thursday night.