ST. LOUIS - Paul Goldschmidt homered twice and scored the game-ending run on Lars Nootbaar's single in the 10th inning as the St. Louis Cardinals beat the Detroit Tigers 3-2 on Wednesday.

The Cardinals led 2-1 entering the ninth. Miguel Cabrera hit a two-out pinch double to right field off St. Louis closer Alex Reyes. Harold Castro, the third Tigers pinch hitter of the inning, drove in Cabrera with a soft single to center, giving Reyes his third blown save in 31 chances. 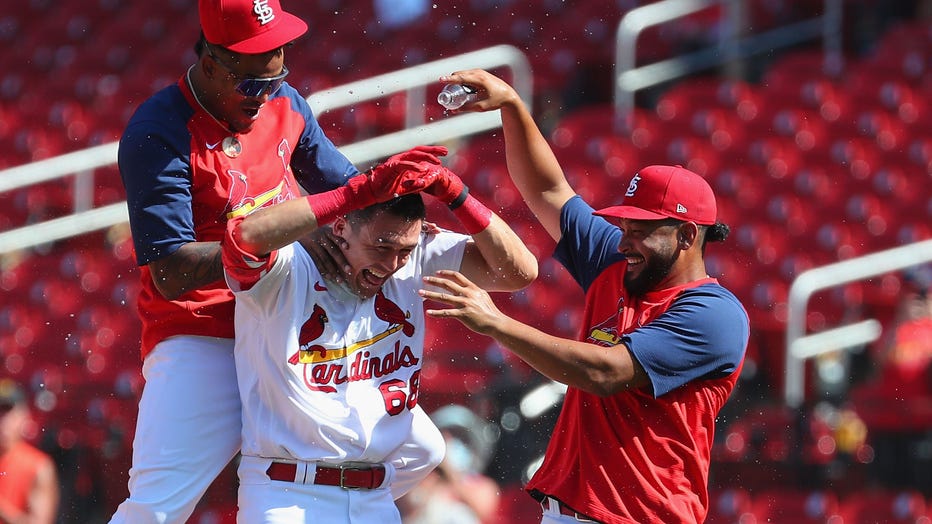 ST LOUIS, MO - AUGUST 25: Lars Nootbaar #68 of the St. Louis Cardinals celebrates with teammates after hitting a walk-off single to beat the Detroit Tigers in the tenth inning at Busch Stadium on August 25, 2021 in St Louis, Missouri. (Photo by Dilip

Tarik Skubal gave up Goldschmidt's homers in the first and third innings but held the Cardinals to one additional hit and had 10 strikeouts in five innings.

Goldschmidt hit the first pitch he saw 427 feet into the left-field bleachers for his 900th career RBI. He hit his 21st homer of the season in his next at-bat. It was his 18th career multi-homer game and first since Sept. 13, 2019, against Milwaukee.

Jonathan Schoop had an RBI single in the fifth to get Detroit within 2-1.

Cardinals catcher Yadier Molina said before the game that he plans to retire after next season. The 39-year-old Molina and the team agreed to terms on a one-year contract Tuesday that will bring him back for his 19th season with the franchise that drafted him in the fourth round of the 2000 amateur draft.

Tigers: LHP Matthew Boyd (left arm discomfort) pitched 4 1/3 scoreless innings for Triple-A Toledo on Tuesday and is expected to be activated in time to start Sunday. C Eric Haase (right abdominal strain) homered in his first rehab at-bat for Toledo on Tuesday and will be re-evaluated after an off day Thursday.