DETROIT - DETROIT (AP) — Steven Kwan hit a leadoff triple and scored to help Cleveland Guardians get off to a solid start and beat the Detroit Tigers 3-2 Wednesday night.

A few hours before the first pitch, the Tigers fired general manager Al Avila to end his seven-year tenure without a postseason appearance.

Cleveland started the day tied with Minnesota for first place in the AL Central. The Guardians lead the last-place Tigers by 16 games in the division.

Aaron Civale started for Cleveland after being on the 15-day injured list with wrist inflammation and retired the first nine batters. Civale gave up two runs and three hits while striking out four over four innings. 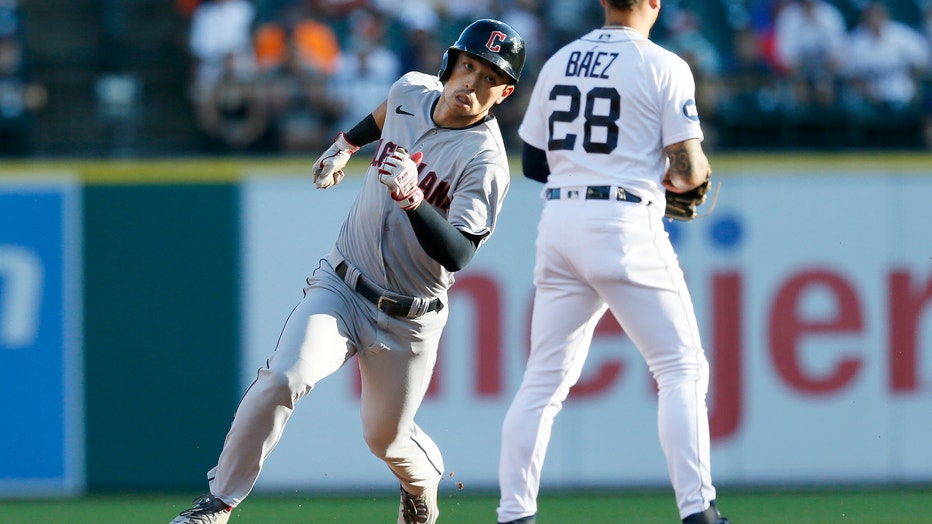 DETROIT, MI - AUGUST 10: Steven Kwan #38 of the Cleveland Guardians rounds second base past Javier Baez #28 of the Detroit Tigers on a triple during the first inning at Comerica Park on August 10, 2022, in Detroit, Michigan. (Photo by Duane Burleson/

James Karinchak and five other relievers — including Bryan Shaw (5-2) — combined for five innings of scoreless relief. Emmanuel Clase gave up one hit in the ninth, earning his 26th save.

Karinchak struck out Javier Baez with two on in the eighth inning. With the bases loaded, Karinchak struck out Eric Haase and Kerry Carpenter — in his major league debut — to trigger an demonstrative, one-man celebration as the reliever walked toward the dugout.

Kwan scored in the first inning on Jose Ramirez’s single. Will Benson had an RBI single — his first major league hit — and Myles Straw’s groundout gave the Guardians a 3-0 lead in the second.

The offensively challenged Tigers scored their only two runs in the fifth on Harold Castro’s single and Haase’s double.

Tigers: RHP Beau Brieske (right forearm soreness) was scheduled to start the series finale on Thursday and after a setback, he was transferred him to the 60-day injured list. "We decided to be very conservative and be smart with Beau," manager AJ Hinch said. ... OF Austin Meadows started an injury rehab assignment with Triple-A Toledo on Wednesday.

Peyton Battenfield will be promoted from Triple-A Columubs as Karinchak’s replacement in Toronto and the right-hander may make his major league debut against the Blue Jays.

Karinchak will not join his teammates after Thursday’s game for the trip across the border because he has not complied with the Canadian government’s COVID-19 vaccine mandate. The reliever has not given up a run over his last 13 2/3 innings and 12 appearances.

Guardians: RHP Jake Jewell was optioned to Triple-A Columbus to make room for Civale on the roster.

Tigers: The Tigers optioned OF Daz Cameron to Triple-A Toledo.