Hall, a double-figures scorer who missed the past eight games with a left foot injury, had his minutes limited to 12 but scored 11 points. Hauser had 14 points, 12 rebounds and six assists and Hoggard scored 11 points with 10 assists. Jaden Akins hit all three of his 3-point attempts and scored 13 points.

The Spartans (9-4) shot 51% in winning their fourth straight game. They resume Big Ten play against Nebraska on Tuesday. 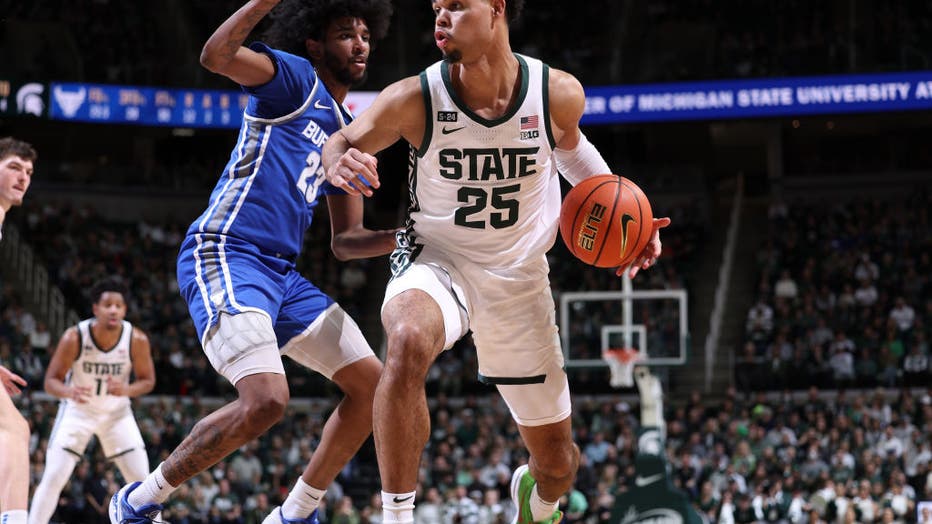 EAST LANSING, MI - DECEMBER 30: Malik Hall #25 of the Michigan State Spartans handles the ball while defended by Isaiah Adams #23 of the Buffalo Bulls during the first half at Breslin Center on December 30, 2022 in East Lansing, Michigan. (Photo by R

Isaiah Adams had 15 points with three 3-pointers, Curtis Jones and LaQuill Hardnett added 12 points each and Armoni Foster had 10 for the Bulls (6-7), who open Mid-American Conference action on Tuesday when they play host to Ohio.

Buffalo scored the first eight points of the second half to get within three, but Akins hit a 3-pointer and Mady Sissoko had a pair of dunks in a 13-4 run. The lead remained in double figures and the Spartans put the game away by outscoring the Bulls 17-2 over 5 1/2 minutes for their largest lead of 26 with under three minutes remaining.

Despite a 1-of-7 start, the Spartans shot 47% in taking a 41-30 halftime lead behind nine points from Hall and eight rebounds from Hauser while the Bulls were shooting just 30%. An Akins' 3-pointer gave the Spartans the lead for good and began a 20-8 run over seven minutes that left Michigan State up 29-17.

This was the fifth meeting between the schools, all won by Michigan State, but the first since 1938.