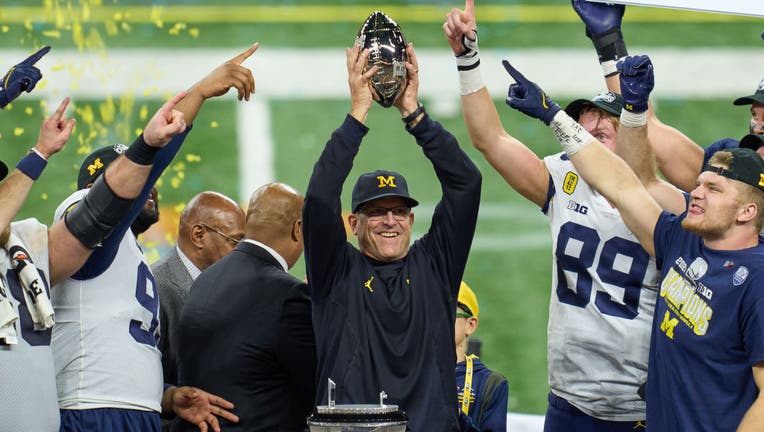 SOUTHFIELD, Mich. (FOX 2) - For the first time in the 8-year history of the College Football Playoff, the Michigan Wolverines are making an appearance against Georgia with the winner advancing to the national championship game.

Michigan (#3) locked in its first selection to the semifinals after beating the Iowa Hawkeyes in dominant fashion 42-3 in the Big Ten Championship game. Now, it will take on what was believed to be the best team in college football throughout the year until the Georgia Bulldogs (#3) lost the SEC Championship to Alabama.

The game is being played in the Orange Bowl in Miami Gardens, Florida, on Dec. 31 and will be the second semifinal game of the day after Alabama and Cincinnati play in the first matchup, at 6 p.m. at the Cotton Bowl.

The winners will both advance to the championship game, being played at Lucas Oil Stadium in Indianapolis on Monday, Jan. 10.

How to watch Michigan vs. Georgia

ESPN is broadcasting the Michigan vs. Georgia game with Chris Fowler on play-by-play and Kirk Herbstreit providing color commentary. Holly Rowe will be on the Georgia sideline with Marty Smith on the Michigan side.

You can listen to the game on LEARFIELD Michigan Sports Network with Jim Brandstatter on play-by-play, Dan Dierdorf providing color commentary, and Dough Karsch will be on the sidelines.

In the Detroit area, WWJ 950 is the place to listen to the game. But if you're on the road, you can stream it or pick it up across 33 different radio stations though Michigan.

If you can't watch the game live or listen, you can follow our live blog for the biggest plays of the game. Click or tap here for details.

How Michigan got to the College Football Playoff

The 2021 Michigan Wolverines were seen by many as a last shot for Jim Harbaugh to retain his role as head coach after a very bumpy 7 years as coach. In the COVID-shortened 2021 season, the Wolverines went 2-4 and a very vocal portion of the fan base called for Harbaugh to be removed as coach.

Instead, the athletics department restructured his contract and loaded it with incentives, two of which were winning the Big Ten Championship and advancing to the CFP.

The lone blemish on Michigan's record was the rivalry game against Michigan State on Oct. 30. MSU scored 15 points in the fourth quarter after Michigan, then number 6, led by 16 in the third quarter.

Michigan entered the season unranked but clawed its way up the rankings with huge wins over Penn State in Happy Valley, Ohio State in Ann Arbor, and of course, the Big Ten Championship game.

The Wolverines are the first team to ever start a season unranked and then reach the College Football Playoff.

Michigan ultimately finished the reason at 12-1, the third time the school has won 12 games a season and the first time since 1997.

What to know about Michigan vs. Georgia

This game should be a good one. Michigan enters the game ranked in the top-20 in total offense (18) and in scoring offense (12).

The Wolverines' defense is stingy too, with total defense ranked 12th and scoring defense tied for fourth.

The only other teams ranked in the top-12 in both scoring offense and scoring defense are Georgia and Cincinnati.

Michigan's offense has accumulated 5,875 yards this season, the second-highest single-season total in history. Its also registered 65 plays of more than 20 yards (5 plays per game), and 13 touchdowns of 50 yards or more.

The Wolverines have scored first in 12 of 13 games this season and is 17-of-19 in the red zone over the past four games.

The running game. Whether its Blake Corum or Hassan Haskins, the Michigan running game will likely be featured heavily against Georgia.

Running back Blake Corum leads the team with 14 plays of more than 20 yards, including a 67-yarder against Iowa in the Big Ten Championship and a 55-yard touchdown against Ohio State the week before.

The offensive line has allowed 27 tackles for a loss (good for third in the NCAA) and just 10 sacks all year (1st in the NCAA).

Quarterback Cade McNamara has touchdowns to nine different receivers and a 15:4 touchdown to interception ratio.

On the other side of the ball, the defense is led by Aidan Hutchinson who broke the single-season record for sacks in a season (14) and has produced more pressure in the regular season than any Power Five edge defender over the past five seasons. Hutchinson is the number 1-graded defender in all of college football.

He's joined by outside linebacker David Ojabo and the two are the first U-M pair to each have double-digit sacks in the same season.

Kicker Jake Moody is Michigan's first-ever winner of the Lou Groza Award. Moody ranks 13th nationally with 9.4 points per game. With 122 points this year, he is just 16 shy of tying Desmond Howard (1991) for the single-season record

This isn't the first time the two legendary college football programs have played, but it's been more than half of a century since they last faced each other.

The two teams first played in 1957 at the Big House in Ann Arbor. Michigan cruised in that one to win 26-0. Eight years later, Georgia returned to Michigan and this time came away with a 15-7 win.

That's the only other times these two teams have played.

Michigan has more wins than any other college football program with 976. It also claims 11 national championships - but the NCAA lists 9 for the Wolverines.

Either way, the last time Michigan won the national championship was back in 1997, when they were co-champions with Nebraska.