DETROIT - Ville Husso made 26 saves for his third shutout this season, and the Detroit Red Wings beat the Nashville Predators 3-0 on Wednesday night.

Filip Hronek, Dylan Larkin and Michael Rasmussen scored in Detroit's third straight win. It was Hronek's fourth goal in his last three games, and Larkin got his ninth of the season, tying for the team lead.

Nashville had gone 4-0-1 over its last five games and won its last six meetings with Detroit. Kevin Lankinen stopped 26 shots in his first start in nearly two weeks, but the Predators were shut out for the second time this season. 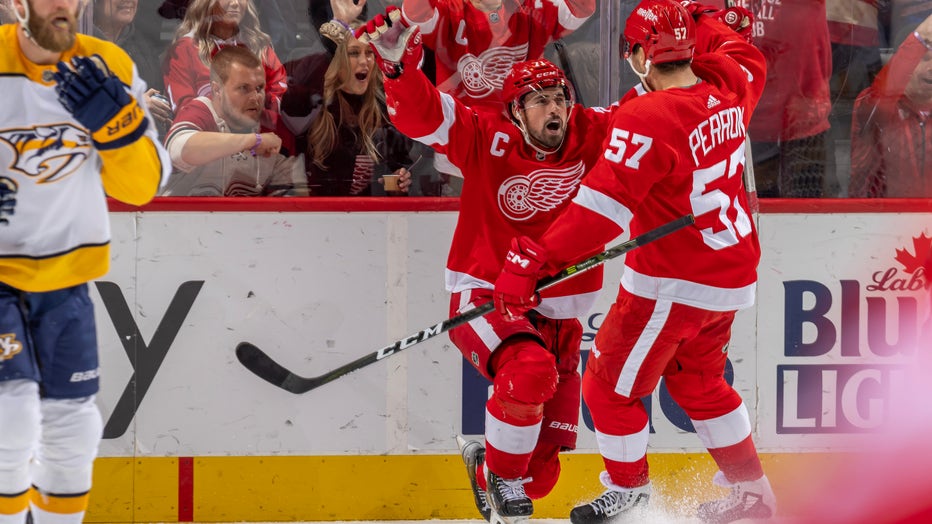 DETROIT, MI - NOVEMBER 23: David Perron #57 of the Detroit Red Wings congratulates teammate Dylan Larkin #71 after he scores a goal during the second period of an NHL game against the Nashville Predators at Little Caesars Arena on November 23, 2022 i

"I thought we deserved better than to get shut out," Nashville coach John Hynes said. "I thought we had some really good looks 5-on-5, some good looks on the power play. That’s the way it goes sometimes. You play pretty well and don’t get any results for what your effort was."

The Red Wings committed 10 giveaways in the first period, but the Predators only had seven shots on goal.

Larkin scored at 4:09 of the second period, snapping a wrist shot past Lankinen's glove.

"That’s what you need out of your top player," Detroit coach Derek Lalonde said of Larkin. "I think his overall game has improved and he has some winning habits and a commitment to doing things correctly. He’s getting rewarded and our group is getting rewarded."

Nashville had a 5-on-3 power play midway through the period but Husso stopped four shots.

"Toward the end of the power play, we had a couple of good looks, a couple of good one-timers and he made some really good saves," Predators defenseman Roman Josi said. "If you get almost two minutes, 5-on-3, you’ve got to find a way to score."

Husso had three shutouts in his first two NHL seasons with St. Louis, which dealt him to Detroit during the offseason. He credited the defensive effort.

"The guys were unbelievable in front of me again tonight and that was an amazing 5-on-3 kill," he said. "That gives us a lot of energy and I think we are on a good track right now. There are still things where we can be better, but I like the work we do every day."

With the Predators' Alexandre Carrier in the penalty box, Hronek ripped a shot from the point past Lankinen at 14:16 of the second. Jonatan Berggren and Andrew Copp collected the assists.

"We had a 5-on-3 kill earlier in the season and it was all blocked shots and guys laying it out on the line," Larkin said. "That kill tonight was Huss making some big saves and the crowd going crazy. That really got us going."

Rasmussen tacked on an empty-netter in the final minute of the third.

The Red Wings claimed goaltender Magnus Hellberg off waivers from the Seattle Kraken. Hellberg, 31, appeared in one game for Detroit last season and one for Ottawa this season. He didn't see any game action for Seattle. ... Nashville assigned F Zach Sanford to Milwaukee of the American Hockey League. ... Red Wings F Oskar Sundqvist played his 300th career game.