Bojan Bogdanovic added 23 points, Jordan Clarkson had 20 and Mike Conley 19 for Utah (30-16), which snapped a three-game home losing streak and won for just the second time in eight games overall.

The Pistons rallied from two separate 10-point deficits and cut Utah’s lead to one at 95-94 on a floater from Josh Jackson midway through the fourth quarter. Gobert scored back-to-back baskets to prevent Detroit from overtaking the Jazz and pushed the lead back to six at 100-94 with 5:30 left. 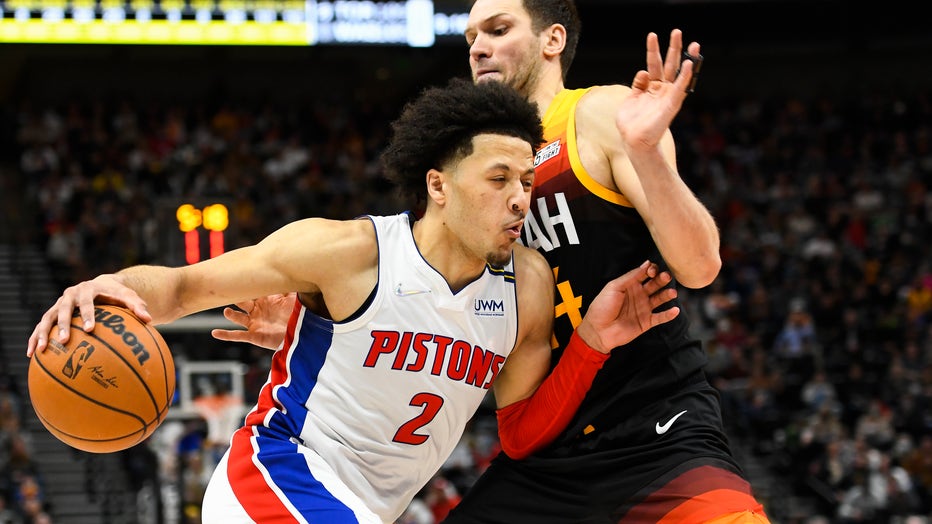 SALT LAKE CITY, UTAH - JANUARY 21: Cade Cunningham #2 of the Detroit Pistons drives into Bojan Bogdanovic #44 of the Utah Jazz during the second half of a game at Vivint Smart Home Arena on January 21, 2022 in Salt Lake City, Utah. NOTE TO USER: User

Utah led by as many 10 points in the first half, building a 54-44 second-quarter lead behind an 8-0 run fueled by Gobert’s back-to-back baskets. Gobert scored 13 points during the second quarter overall and his effort down low helped the Jazz enjoy an 18-4 scoring advantage in the paint during that 12-minute stretch.

The Pistons used a 9-0 run, capped by back-to-back baskets from Bey, to surge ahead 67-64 in the third quarter.

Utah answered with an 11-1 run to go back in front 85-75 later in the quarter. Trent Forrest scored a pair of baskets to punctuate the run and give the Jazz their second double-digit lead of the game.

Pistons: Killian Hayes (right hip contusion) did not play. ... McGruder is averaging 16.3 points per game over his last three contests. He has shot 60% from the field in that stretch.

Jazz: Donovan Mitchell (concussion) was sidelined for a second straight game. ... Forrest scored a season-high eight points on 3-of-4 shooting. ... Ingles’ steal with 1:30 left in the third quarter was the first of the game for Utah.

Pistons: at Denver Nuggets on Sunday.