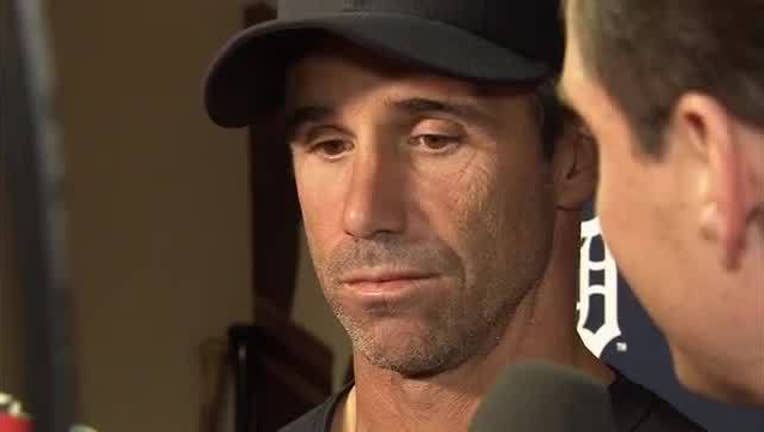 Two innings after Tigers outfielder JaCoby Jones was hit in the face by a pitch, Detroit starter Matthew Boyd threw behind Sano, who pointed his bat toward Boyd and yelled out at the mound. McCann intervened and appeared to put his mitt in the face of Sano, who reacted immediately with a right hand.

There was plenty of pushing and shoving near home plate as both benches and bullpens emptied, but there did not appear to be any other punches thrown. Sano and Boyd were both ejected.

Jones took a 90 mph fastball from Twins reliever Justin Haley to the face in the third. Jones sprang to his feet and ran up the third base line, in the direction of the Tigers' dugout, where he was met by a trainer and manager Brad Ausmus.

The trainer put a towel to Jones' bleeding mouth, and the outfielder walked into the dugout toward the clubhouse under his own power. There was no immediate update on his condition.

Nicholas Castellanos and Justin Upton each hit a solo home run for the Tigers, who put star slugger Miguel Cabrera on the disabled list before the game and used five relievers after Boyd was tossed. Blaine Hardy (1-0) won in relief, and Francisco Rodriguez earned his sixth save in eight chances this season.

Michael Tonkin (0-1) took the loss. Tonkin walked Mikie Mahtook leading off the sixth inning, and Castellanos followed with an RBI double to put Detroit on top 4-3. McCann added a sacrifice fly later in the inning.

Pinch-hitter Jason Castro hit a solo homer in the ninth, but Rodriguez closed it out by striking out Joe Mauer with a runner at first base.

Both starting pitchers struggled with their control, and the teams combined to use 13 relievers. Twins left-hander Adalberto Mejia walked three but struck out six in 2 2/3 innings. Meanwhile, Boyd walked three batters in the first two innings before settling down to retire eight of the next nine Twins.

That streak, and Boyd's day, came to an end when he threw behind Sano - perhaps in retaliation for Haley nailing Jones in the face.

Tigers: Cabrera (strained right groin) was placed on the 10-day DL. He was injured while diving for a grounder Friday night.

Twins: INF Ehire Adrianza (strained oblique) played shortstop and went 3 for 5 and scored three runs Friday in the first game of his rehab assignment with Class A Fort Myers.

Tigers: Detroit sends right-hander Michael Fulmer (1-1, 3.60 ERA) to the mound Sunday in search of his second victory over the Twins this month.

Twins: In his last outing, Minnesota's Kyle Gibson (0-2, 6.91) pitched into the sixth inning for the first time this year. He'll face the Tigers 11 days after they tagged him for five earned runs in four innings at Comerica Park.