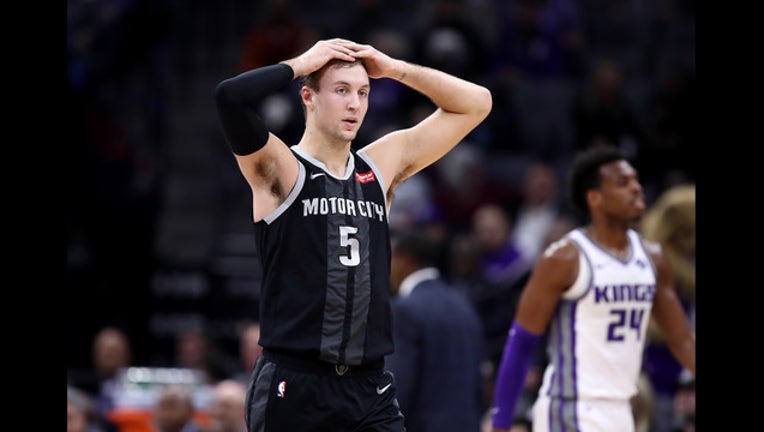 SACRAMENTO, CALIFORNIA - JANUARY 10: Luke Kennard #5 of the Detroit Pistons walks back down court with his hands on his head during their game against the Sacramento Kings at Golden 1 Center. (Photo by Ezra Shaw/Getty Images)

SACRAMENTO, Calif. (AP) - The Sacramento Kings won the battle behind the 3-point line and never trailed in a victory against the Blake Griffin-less Detroit Pistons.

Buddy Hield scored 18 points, Willie Cauley-Stein had 14 points and 14 rebounds, and the Kings went 9-of-22 on 3-pointers in a 112-102 victory Thursday night against the Pistons, who came into the game as the NBA's best team at defending 3-point shots.

Iman Shumpert had 13 points and De'Aaron Fox added 12 points and six assists for the Kings, who had lost five of six.

Stanley Johnson had 16 points off the bench, Reggie Bullock and Bruce Brown each had 15 points, and Andre Drummond had 12 points and 11 rebounds for the Pistons, who have lost four straight and 9 of 11.

Griffin, Detroit's scoring leader, got the night off after playing 37 minutes Wednesday night in a 113-100 loss at the Los Angeles Lakers. He did not have a rebound in that game, the first time that had happened in his eight-year pro career.

Kings coach Dave Joerger said Cauley-Stein's ability to run the floor against Drummond was a key to the win.

"We were the fresher team," Joerger said. "I thought he was fresh and he was energetic. I thought he was stronger to the rim tonight, and he just had a little more pop."

The Kings shot 40.9 percent from behind the 3-point line against a Pistons team that had been allowing opponents 31.9 percent success from beyond the arc. Sacramento entered second in the NBA in shooting 3s at 39 percent.

Detroit went 11 for 38 on 3s, with Bullock hitting three of them.

"They push the ball a lot in transition. Whoever gets it out, they kick it, then push it out," Bullock said. "Their pace is something we tried to prepare for, but we didn't do a good job at trying to contain them in the transition game. We also turned the ball over and gave them a lot more possessions."

The Kings were coming off one of their worst losses of the season, blowing a 21-point second-half lead in a 115-111 defeat Tuesday night at Phoenix, the worst team in the Western Conference.

Sacramento never trailed, starting the game with a 13-2 spurt and leading 34-21 after one period. The Kings held a 65-48 halftime lead and maintained that 17-point margin at the end of three quarters. They took their biggest lead of the night, 102-79, with about eight minutes left.

Fox said the Kings were determined not to let another big lead slip away.

"We were definitely thinking about that," he said. "Today was about finishing a 48-minute game, and I think we did that pretty well today."

Pistons: Had just four fast-break points in the game, while the Kings had 21. ... Had won two straight and seven of 10 against the Kings. ... Host Sacramento on Jan. 17.

Kings: Shumpert returned to the starting lineup after missing three games with a sprained right index finger. ... Are 9-3 against Eastern Conference teams this season. ... Fox, who had eight turnovers in the loss at Phoenix two nights earlier, had two against the Pistons in 24 minutes. ... Harry Giles hd 14 points off the bench. ... Had 19 second-chance points, as opposed to six for the Pistons. ... By hitting just nine 3-pointers, snapped their franchise-record 12-game streak with 10 or more 3s.

Pistons: Continue their four-game trip Saturday at the Los Angeles Clippers in Griffin's first return to LA against his former team. He was traded to the Pistons in January 2018.

Kings: Host the Charlotte Hornets on Saturday night in the second game of a three-game homestand. The Kings have lost three straight to the Hornets and have not defeated Charlotte in Sacramento since 2015.