CHICAGO - Michael Kopech struck out a career-best 11 in six innings of no-hit ball and Andrew Vaughn hit a tiebreaking two-run single in the seventh inning, leading the Chicago White Sox to a 2-0 victory over the Detroit Tigers on Friday night.

Kopech was lifted despite blanking the Tigers on 85 pitches throught six innings. Vaughn snapped the scoreless game with a two-out, bases-loaded blooper that landed just in front of right fielder Willi Castro’s glove.

Tigers reliever Alex Lange (4-3) pitched the seventh and took the loss as Detroit lost its fifth straight and eighth in nine games. 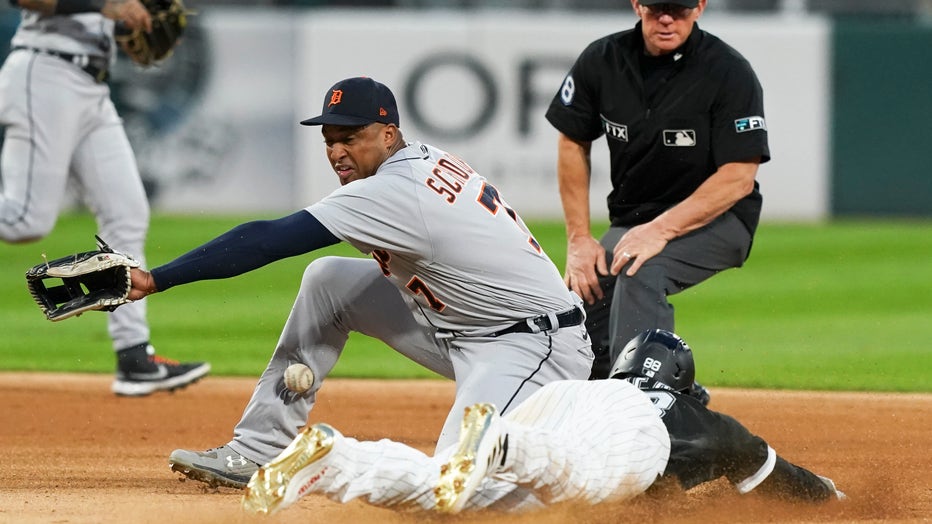 CHICAGO, ILLINOIS - AUGUST 12: Luis Robert #88 of the Chicago White Sox gets caught stealing second by Jonathan Schoop #7 of the Detroit Tigers during the sixth inning of a game at Guaranteed Rate Field on August 12, 2022 in Chicago, Illinois. (Photo

Kopech allowed three walks, including one to Miguel Cabrera, and all the balls hit into play by the Tigers were handled cleanly by Chicago fielders. Reynaldo López (5-2) got a smattering of boos when he came to the mound to start the seventh, and they got louder after leadoff batter Javier Báez laced a single into the right-center field gap. López retired the next three batters to end the inning.

Kendall Graveman pitched the eighth and Liam Hendriks worked the ninth for his 24th save in 27 chances.

Daniel Norris, making his first appearance with the Tigers after signing a minor-league contract late last month, allowed four hits and struck out one with two walks in the first 4 2/3 innings.

The Tigers managed just three hits while striking out 14 times.

Chicago outfielder Luis Robert left the game in the bottom of the sixth with a sprained left wrist after colliding with Detroit’s Jonathan Schoop.

Robert singled and was thrown out trying to steal second a few pitches later. Replays showed his left hand crumpling into Schoop’s shin just after the tag was applied. He rolled over and was helped off the field. Robert, who spent time on the injury list with blurred vision this season, was replaced in center field by Adam Engel after the inning.

Norris had White Sox runners at first and second with two outs in the fourth, but gloved a Yoan Moncada liner that appeared headed for shallow center. The catch made the left-hander backpedal a few feet behind the mound, but he hung on and kept the game scoreless.

Tigers: The club moved LHP Tarik Skubal (left arm fatigue) to the 60-day injury list prior to the game to make room for Norris. Manager A.J. Hinch said Skubal’s visit with a specialist next week will focus on his elbow.

White Sox: Manager Tony La Russa did not have an update on RHP Joe Kelly, who left Thursday’s loss at Kansas City with lightheadedness. … OF A.J. Pollock, who missed the last two games after fouling a ball off his foot Tuesday, was in the leadoff spot Friday night.