Kyle Kuzma hit a 3 with 0.6 seconds left in overtime and the Washington Wizards handed the Detroit Pistons their 10th straight loss, 119-116 Wednesday night.

Kuzma scored 26 points and Bradley Beal added 25 for the Wizards, who blew a 13-point lead in the fourth quarter. 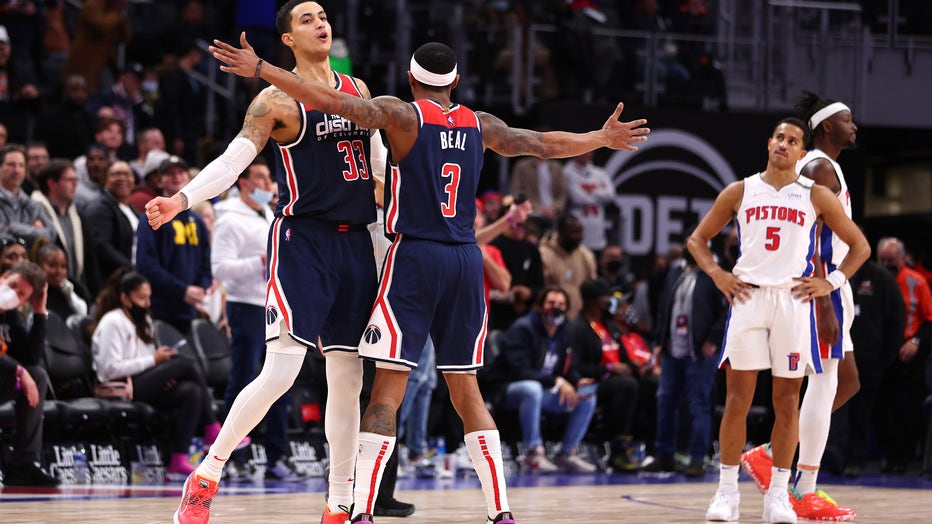 DETROIT, MICHIGAN - DECEMBER 08: Kyle Kuzma #33 of the Washington Wizards celebrates a three point basket with Bradley Beal #3 to take the lead with .06 seconds left in overtime against the Detroit Pistons at Little Caesars Arena on December 08, 2021

Mitchell made 14 of 23 shots and Utah connected for 25 3-pointers, two shy of their season high set last Friday against Boston.

Bojan Bogdanovic had 21 points and five rebounds, and Jordan Clarkson scored 18 points — all from deep — off the bench for Utah.

Starting for the injured Jimmy Butler, Martin shot 9 of 12 from the field, including 6 for 8 on 3-pointers, as the Heat tied a franchise record with 22 3s against the defending NBA champions.

Kyle Lowry had 22 points and 13 assists and Max Strus scored all 16 of his points in the fourth quarter for Miami, which snapped a three-game home losing streak.

Jrue Holiday scored 27 points and Khris Middleton finished with 20 for the Bucks. Two-time MVP Giannis Antetokounmpo had 15 points as Miami limited him to 4-of-13 shooting from the field.

The Heat took the lead for good with nine straight points in the final 55 seconds of the third.

HOUSTON (AP) — Eric Gordon scored 21 points before being ejected in the fourth quarter and Garrison Mathews added 19 as Houston extended its winning streak to seven games with a victory over shorthanded Brooklyn.

The Rockets’ streak comes after they dropped their previous 15 games, and it’s the first time Houston has won seven straight since winning eight in a row in November 2019.

James Harden had 25 points for the Eastern Conference-leading Nets on a night when NBA leading scorer Kevin Durant and LaMarcus Aldridge both sat out for rest. It was Harden’s second visit to Houston since he was traded in January during his ninth season with the Rockets.

The Rockets led by 17 to start the fourth quarter and the Nets cut the deficit to four before Houston pulled away.

Tobias Harris added 18 points in a rematch of a game the 76ers won 127-124 in overtime Monday night on the same court.

Gordon Hayward had a season-high 31 points and seven assists for the Hornets, who played without five rotational players, including last year’s NBA Rookie of the Year LaMelo Ball due to NBA health and safety protocols.

Kelly Oubre Jr., who had 35 points in Charlotte’s loss Monday night, finished with 22 points and 10 rebounds but finished just 3 of 12 from beyond the arc and missed a free throw that would have made it a one-possession game with 7 seconds left.

Duarte, a rookie shooting guard, eclipsed his 13.1-point scoring average with 14 in the first quarter, when the Pacers seized control with a 15-2 run. Indiana outscored New York in each of the first three quarters to lead 96-76 and mainatined a double-digit lead from midway through the second quarter until the final buzzer.

Each of the Pacers starters scored in double figures, with Malcolm Brogdon getting 16 points and Caris LeVert 15. Duarte and LeVert each had six assists. Domantas Sabonis had 21 points and 11 rebounds.

TORONTO (AP) — Mike Muscala made a go-ahead 3-pointer with nine seconds remaining, Shai Gilgeous-Alexander scored 16 of his 26 points in the third quarter, and Oklahoma City held on late to win its second straight game, rallying from a 13-point deficit to beat injury-depleted Toronto.

Toronto’s Justin Champagnie thought he had tipped in Fred VanVleet’s missed shot at the buzzer to give the Raptors the win but, after a wild celebration at center court, the referees ruled Champagnie’s shot had come too late.

The Thunder, who won Monday at Detroit to snap an eight-game losing streak, overcame a double-digit deficit for the second game in a row. Oklahoma City fought back from 18 down to beat the Pistons.

Gary Trent Jr. scored 24 points, Pascal Siakam had 23 and VanVleet scored 14 of his 19 in the fourth quarter as the Raptors lost for the first time in three games. Toronto is 4-9 at home.

Garland also had six assists as the Cavaliers won for the fifth time in seven games, earning their most lopsided home victory of the season. Mobley, the third overall draft pick, shot 8 of 11 from the field and had a season-high five blocked shots and two steals.

Zach LaVine scored 23 points with nine assists for Chicago, which had its four-game win streak snapped. Lonzo Ball added 19 points and Nikola Vucevic had 18 points and 12 rebounds, but shot 8 for 23 from the field.

The Bulls played their second game since leading scorer DeMar DeRozan was placed in the NBA’s health and safety protocol for COVID-19. Chicago guards Coby White, Matt Thomas and Javonte Green are sidelined for the same reason.

Reggie Bullock added 15 for the Mavericks, who surpassed 100 points for only the second time in the past six games.