CHICAGO - Zach LaVine scored a season-high 43 points, and the Chicago Bulls pulled away in the closing minutes to beat the Detroit Pistons 132-118 on Friday night.

LaVine looked more like his old explosive self than the guy managing his left knee following offseason surgery. And the Bulls ended the game on a 17-3 run after getting all they could handle from the team with the NBA’s worst record.

LaVine had the crowd roaring when he capped an 18-point first quarter with a thunderous alley-oop from Coby White just before the buzzer and let out a primal scream. He was also on target from the outside, making 5 of 9 3-pointers and 15 of 20 shots in the game. 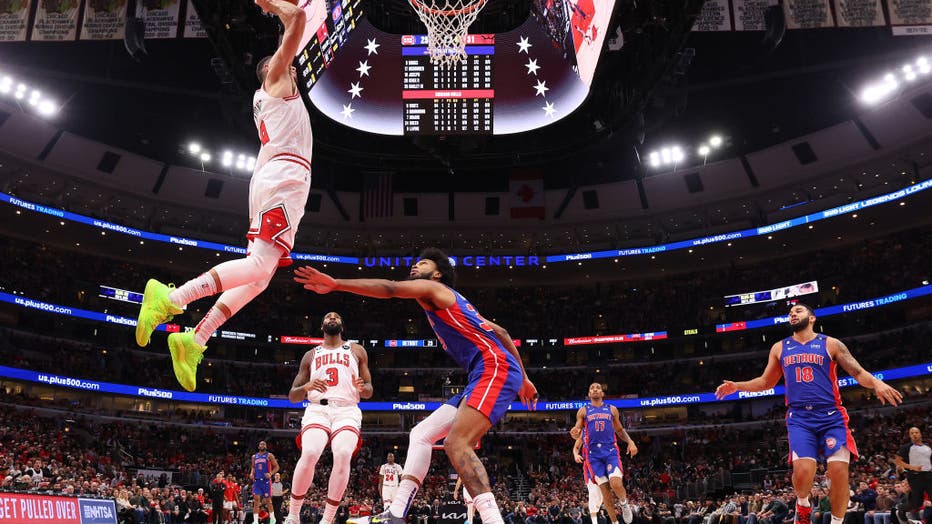 CHICAGO, ILLINOIS - DECEMBER 30: Zach LaVine #8 of the Chicago Bulls dunks against the Detroit Pistons during the first half at United Center on December 30, 2022 in Chicago, Illinois. NOTE TO USER: User expressly acknowledges and agrees that, by dow

The Pistons were down two players, with guard Killian Hayes starting a three-game suspension for striking Orlando’s Moritz Wagner in the back of the head in Wednesday’s win and forward Hamidou Diallo serving a one-game punishment for his role in the altercation.

The Bulls, coming off an overtime win over Milwaukee following an embarrassing loss to Houston, found themselves deadlocked at 115-all before putting away the Pistons.

DeRozan made two free throws with 4:10 remaining and Jalen Duren got called for goaltending trying to block a layup by LaVine to spark the game-ending run. After Ivey made a free throw, Chicago's Alex Caruso nailed a corner 3.

The Pistons got called for a shot-clock violation. LaVine drove for a three-point play to make it a nine-point game.

Pistons: Coach Dwane Casey said the NBA "did the right thing by everyone" with the punishments against Hayes and Diallo that were handed down by executive vice president Joe Dumars — the former Pistons star player and executive. "Anything you do, whether it's on the court or in life, there's consequences for it and I preach that every day," he said. Wagner was suspended two games and eight Magic players one game apiece.

Bulls: PG Lonzo Ball has been making some progress lately as he recovers from his latest surgery on his left knee. Coach Billy Donovan said he has been shooting, jumping and doing some light jogging. "It is progressing. It's just really slow," he said. "There has definitely been some improvement." Ball has been sidelined all season following surgery in September — his second on the knee in less than a year and third since he entered the NBA with the Lakers in 2017. ... F Derrick Jones Jr. (sprained left ankle) missed his fifth consecutive game.