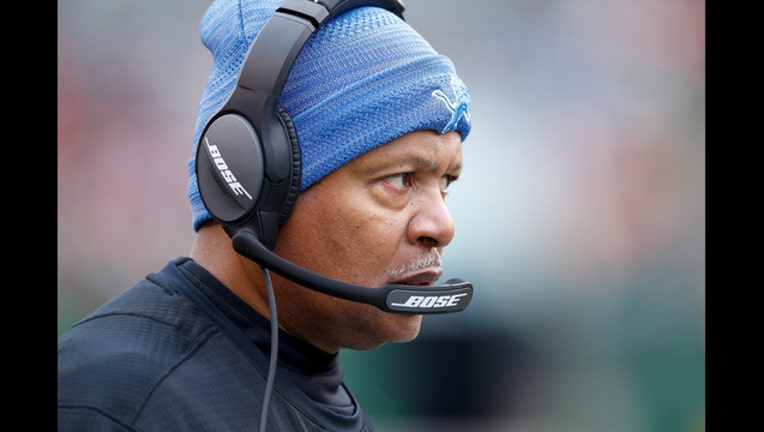 CINCINNATI, OH - DECEMBER 24: Head coach Jim Caldwell of the Detroit Lions looks on against the Cincinnati Bengals during the first half at Paul Brown Stadium on December 24, 2017 in Cincinnati, Ohio. (Photo by Joe Robbins/Getty Images)

ALLEN PARK, Mich. (AP) - Beginning what could be his last week as head coach of the Detroit Lions, Jim Caldwell was his usual deflective self.

He shrugged off questions about his future, but at the same time, admitted that his team too often wasn't good enough to get the job done.

The Lions (8-7) lost 26-17 Sunday at the Cincinnati Bengals, eliminating them from playoff contention, and raising questions about Caldwell's future with the team.

As he began preparations for Sunday's season finale against the Green Bay Packers, Caldwell insisted Monday that he'd had no talks about his future with GM Bob Quinn since the loss to the Bengals.

"In regards to that, nothing has changed," Caldwell said, adding, "I wouldn't tell you if I did, but we don't discuss what we disclose."

He at least seemed to recognize the reasoning for the questions.

"It is what it is," Caldwell said. "But everybody gets evaluated every year - players, coaches, schemes, everything. That's part of the process."

Caldwell agreed to a multiyear contract extension in the fall that was guaranteed through 2018, so if the Lions opt to fire him, they would only be required to pay him for next season.

Hired in 2014, Caldwell's first Lions team went 11-5, earning a wild-card berth but losing in the playoffs to the New Orleans Saints. His teams have been mediocre at best ever since.

In 2015, they were 7-9, and last season, went 9-7 to earn another wild-card berth, but lost the last three games of the season to squander the NFC North title and then were beaten by the Seattle Seahawks in a wild-card playoff game.

A loss to the Packers on Sunday and the Lions would be at .500 (24-24) the past three seasons under Caldwell.

Caldwell wasn't about to dispute the reality of the team's record while he's been head coach.

"We've got to get better in every area. There's not anything that we just absolutely excelled at across the board."

Caldwell's players are standing behind their coach, willing to shoulder the blame for their failures.

"I think he did a great job," Lions quarterback Matthew Stafford said. "We have to go out there, make plays, score points and win games."

"It's our job to get it fixed and we aren't fixing it," added safety Glover Quin. "We have to look at ourselves first."

At the same time, they know that a coach is measured by wins and losses, and lately, the Lions haven't been measuring up in the standings.

"We understand that's the nature of this business," Stafford said. "We also understand what he does behind closed doors.

"I have a lot of respect for him."

As much as he won't be able to avoid it, Caldwell would prefer the focus this week not be on his future.

"I'm not concerned about how I feel," Caldwell said. "It doesn't matter. The fact is we've got a game left to play. It's an opportunity for our guys to get better.

"We have 16 opportunities and you can't take them for granted."