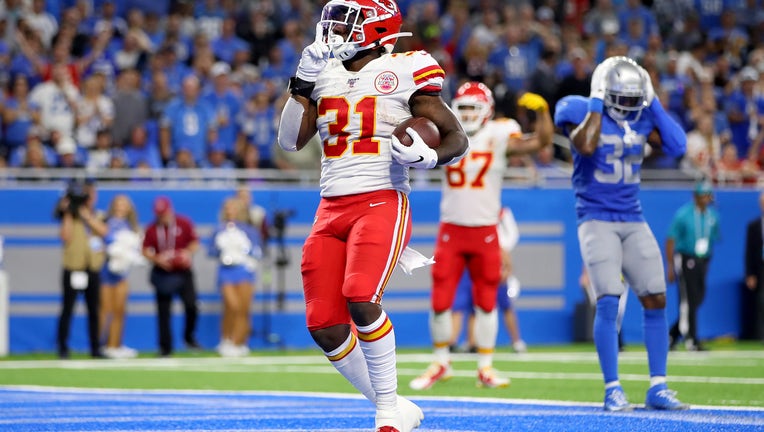 DETROIT, MICHIGAN - SEPTEMBER 29: Darrel Williams #31 of the Kansas City Chiefs celebrates after scoring a 1 yard touchdown against the Detroit Lions during the fourth quarter in the game at Ford Field on September 29, 2019 in Detroit, Michigan. (Pho

ALLEN PARK, Mich. - The first loss of the season for the Detroit Lions may have actually given them more legitimacy as playoff contenders.

The Lions battled the Kansas City Chiefs all the way to the final minute Sunday before finally losing 34-30.

Along the way, Detroit made some colossal blunders, fumbling inside the Kansas City 10-yard line twice in the third quarter. Those mistakes cost the Lions dearly, but in spite of all that, Detroit re-took the lead twice in the second half.

"I think this is an extremely tough, mentally tough team," coach Matt Patricia said. "I think they fight, I think they'll play, I think they go out and compete, and I am proud of them for that. But we're obviously disappointed that we didn't win the game."

There's little time for moral victories in a 16-game NFL season, but if the Lions were criticized for some of their shortcomings in wins over the Chargers and Eagles, they can certainly receive credit for much of what they did Sunday, even in defeat. Matthew Stafford threw for 291 yards and three touchdowns, with receivers Kenny Golladay, Marvin Jones and Marvin Hall all making crucial catches.

Kerryon Johnson ran for 125 yards, although the fumbles by him and Stafford deep in Kansas City territory put Detroit in a hole. Johnson's fumble was returned all the way back the other way for a touchdown.

The Detroit defense held up pretty well despite being without injured defensive back Darius Slay. The Lions forced three fumbles - two forced by the defense and one on special teams - in that third quarter.

Detroit outgained Kansas City 447-438. Against a top opponent, in a matchup of unbeaten teams, the Lions looked mostly like they belonged.

There was a lot for the Lions to like about their defensive performance. They held Patrick Mahomes without a touchdown pass - and the Chiefs as a team only scored one offensive TD through three quarters. Detroit couldn't hold off Kansas City for 60 minutes, though. The Chiefs scored two touchdowns in the fourth, and that was enough to win the game.

Ball security. Those two third-quarter fumbles weren't flukes. Stafford said he was trying to do too much on his, and Johnson pretty much admitted the same.

Every team in the league makes mistakes, but the Lions learned the hard way how costly turnovers such as that can be against an elite opponent.

"The first four games, I think we've talked a lot about September football and what that looks like in the NFL. There are a lot of bad plays out there," Patricia said Monday. "There are some good plays and a lot of really important situational plays. I think those are the ones we're trying to learn from. We've done well in some of those situations and we've done not so well in others."

J.D. McKissic, a 5-foot-10 running back, had 30 yards on four carries and also added an 11-yard catch. It will be interesting how the Lions use his versatility going forward.

After missing the first two games of the season with ankle problems, linebacker Jarrad Davis forced a fumble in Week 3 at Philadelphia. He had a quiet game Sunday, though.

Slay (hamstring) and WR Danny Amendola (chest) were inactive, and the Lions also lost T.J. Hockenson (concussion) and S Quandre Diggs (hamstring) during the game. Hockenson took a scary fall when he appeared to be trying to hurdle a defender.

29 - The number of first downs for both the Lions and Chiefs on Sunday, which underscored how even the game was.

The Lions have this coming weekend off, then head to Green Bay for a Monday night matchup Oct. 14 that will be Detroit's first game within its division.