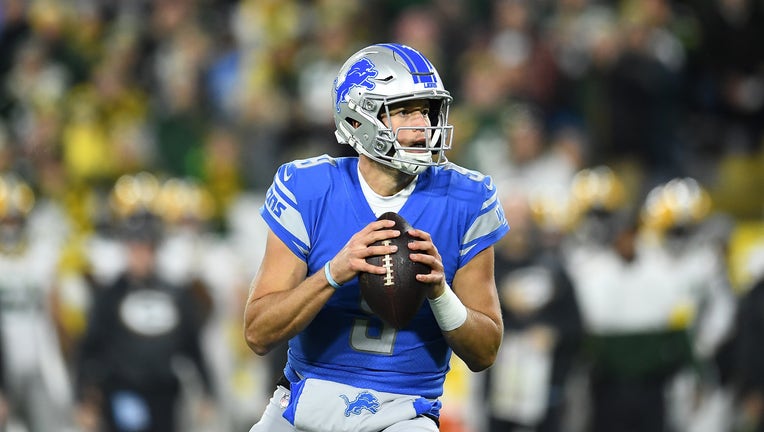 GREEN BAY, WISCONSIN - OCTOBER 14: Matthew Stafford #9 of the Detroit Lions drops back to pass during a game against the Green Bay Packers at Lambeau Field on October 14, 2019 in Green Bay, Wisconsin. (Photo by Stacy Revere/Getty Images)

ALLEN PARK, Mich. - The Detroit Lions are thankful they have a short week to prepare to play Minnesota in a possibly pivotal NFC North matchup.

A quick turnaround gave the Lions less time to lament critical calls that didn't go their way on Monday night in a loss at Green Bay.

"It's kind of a blessing in disguise because we don't have time to think about anything but Minnesota," Lions center Frank Ragnow said. "And, the Vikings are really good - especially on defense."

The Vikings (4-2) have won two in a row, leaning on one of the NFL's best defenses and an offense that is starting to perform up to its potential.

Minnesota has averaged 33 points the past two weeks with a grinding running game led by Dalvin Cook that helps Kirk Cousins make big plays through the air. After a slow start, Cousins had six touchdown passes and one interception in wins over Philadelphia and the New York Giants.

Detroit (2-2-1) has dropped two straight after an unbeaten, three-game start because it failed to keep double-digit leads against the Packers and Kansas City Chiefs.

"You can't let it stick around in your head because there's a long season left," Flowers said.

If the Lions don't win Sunday at home, though, their chances to contend in the competitive division will take a hit.

Minnesota, meanwhile, wants to avoid starting 0-3 in the NFC North after playing its first three division games as visitors.

"We get them all at home at the end, so it all evens out," Vikings coach Mike Zimmer said.

Here are some things to watch when the Lions face the Vikings:

Vikings defensive end Danielle Hunter leads the league with eight tackles for losses. He set an NFL record with a sack against the Eagles that gave him 46 for his career, the most in history by a player younger than 25. Hunter has two more games before his birthday, and the Lions have provided him plenty of pass-rushing opportunities in the past. Hunter has seven sacks in six games against them, plus three fumble recoveries and one he returned for a 32-yard touchdown.

The Lions lost to the Packers at least in part because they scored only one touchdown and had to settle for Matt Prater's five field goals. That followed a trend.

In goal-to-go situations, Detroit ranks 30th in the NFL with four touchdowns in nine chances.

Inside the 20, Detroit has gotten into the end zone on half of its 16 opportunities to rank among the bottom third of the league.

The problem may be ominous for the Lions because they were relegated to scoring only on field goals in two losses to Minnesota last year.

Stafford is 87 yards passing from setting a record for the fewest games to reach the 40,000-yard mark. Matt Ryan reached that number in 151 games, five more than Stafford has played.

"When you step back and look at stuff like that, I think it's just pretty amazing," Patricia said.

Stafford has bounced back from a lackluster year with a solid season so far as the league's ninth-ranked passer. He has thrown nine touchdown passes and two interceptions, both coming in a Week 2 win over the Los Angeles Chargers.

"Stafford is playing outstanding, maybe the best I've ever seen him," Zimmer said. "He's throwing the ball into a lot of tight windows. He's pulling the trigger. He's still scrambling."

Though Minnesota hasn't been stung by questionable late-game calls quite like Detroit was at Green Bay, penalties have been an uncharacteristic problem for the team.

The Vikings had four penalties for 30 yards against them in their win over the Eagles last week, both season lows for a team that has been charged with the third-most penalty yardage in the league (456) and irritated its discipline-driven coach in the process.