DETROIT - There were a fair number of empty seats at Ford Field, and at times, the crowd's silence made the place seem emptier than it was.

For most of the first half, the Detroit Lions' performance fit the scene.

The Lions staggered to their seventh consecutive loss Sunday, falling 38-17 to the Tampa Bay Buccaneers, and for a while, it felt like the game might end with an even more lopsided score. Tampa Bay scored the first three touchdowns, and when the Buccaneers went ahead 21-0 with 8:13 remaining in the second quarter, they had outgained Detroit 314-2.

“It’s a shame. It’s frustrating that that’s what happened,” Lions quarterback David Blough said. "I'll take a lot of responsibility for that, too, as the leader of the offense.”

Blough was hard on himself, but he's in an exceedingly difficult situation. He's only playing because of injuries to Matthew Stafford and Jeff Driskel, and the Lions were also without several top rushing and receiving threats.

As Detroit (3-10-1) finishes up the season, the big questions are about the job security of general manager Bob Quinn and second-year coach Matt Patricia. The first quarter certainly wasn't a ringing endorsement of anyone associated with the Lions. They were outgained 236-1 and fell behind 14-0. 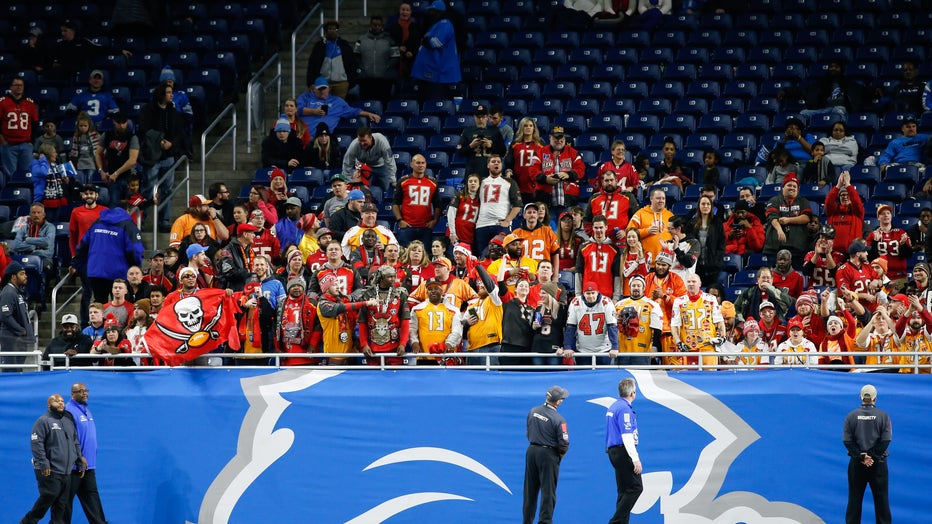 DETROIT, MI - DECEMBER 15: Tampa Bay fans cheer in the end zone stands that is devoid of Detroit Lions fans during a regular season game between the Tampa Bay Buccaneers and the Detroit Lions on December 15, 2019 at Ford Field in Detroit, Michigan. T

The announced attendance was 56,515. There were occasional boos, and some sarcastic cheers when Detroit finally did a few things right. There was also just a general sense of malaise during a game in which the only real issue at stake was whether the Buccaneers (7-7) would make it to .500. They did - rather easily.

The atmosphere picked up a bit when the Lions rallied. They actually had the ball down by seven in the fourth quarter, but Sean Murphy-Bunting intercepted a pass and took it back 70 yards for a Tampa Bay touchdown to make it 31-17.

“You can't do it,” Blough said. “Playing quarterback in this league, you've got to value the football first and foremost. It's just frustrating that it happened there, after the guys fought so hard to battle back.”

One nice story for the Lions was Wes Hills, a rookie from Slippery Rock who ran for two short touchdowns after coming off the practice squad to make his NFL debut. But that only underscored how decimated the Lions are. A few weeks ago, Bo Scarbrough was the largely anonymous running back who showed up and started getting carries for Detroit. On Sunday, Scarbrough was inactive.

“It’s not easy, but it’s part of the deal," Patricia said of his team's injury situation.

The Lions had a brief chance to jump out to an early lead after Jameis Winston threw an interception on Tampa Bay's first possession. Detroit, however, went three-and-out.

“Obviously, when you get the ball at midfield, you expect, OK, at the least, we'll come out with some points here, and this is a great start," Blough said. "We went backwards on the first play, and then two incompletions, I think, following that.”

Tampa Bay scored touchdowns on its next two drives - one of which was a 99-yarder that required only five plays.