CHICAGO - Jamaal Williams scored on a 1-yard run in the closing minutes, Jared Goff threw for 236 yards and a touchdown, and the Detroit Lions overcame another spectacular effort by Chicago’s Justin Fields to beat the Bears 31-30 on Sunday.

The Lions (3-6) scored 21 points in the fourth quarter on the way to their second straight win after losing five in a row.

They wiped out a 14-point deficit with two quick TDs, tying it on a 20-yard interception return by Jeff Okudah.

Fields then went 67 yards untouched for a TD to put Chicago (3-7) back on top 30-24. Cairo Santos missed the extra point. 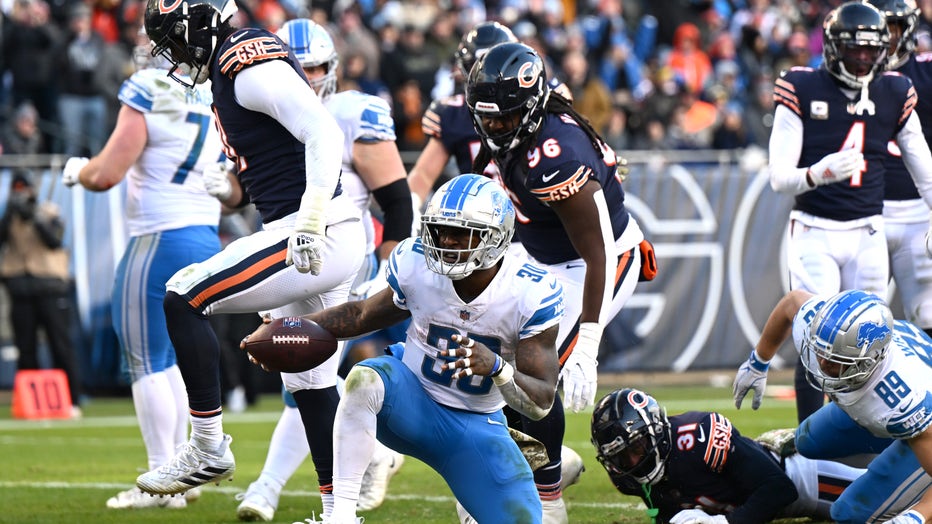 CHICAGO, ILLINOIS - NOVEMBER 13: Jamaal Williams #30 of the Detroit Lions celebrates after scoring a touchdown during the fourth quarter against the Chicago Bears at Soldier Field on November 13, 2022 in Chicago, Illinois. (Photo by Quinn Harris/Gett

Goff led an eight-play, 91-yard drive in the closing minutes. Williams made it 31-30 when he scored with 2:21 remaining, and the Lions came away with back-to-back wins for the first time since October 2020 under former coach Matt Patricia. They also stopped a 13-game road winless streak.

Fields ran for 147 yards and two scores, after going for 178 the previous week against Miami — the highest rushing total by an NFL quarterback in a regular-season game since at least 1940. He became the only quarterback in the Super Bowl era with multiple rushing touchdowns of 60-plus yards in the same season.

Fields also threw for 167 yards and two scores, including a 50-yarder to Cole Kmet.

Amon-Ra St. Brown had 119 yards receiving. Brock Wright caught a touchdown, and the Lions won on the road for the first time since beating the Bears at Soldier Field in December 2020.

The Bears finished with 258 yards rushing, making them the first team in the Super Bowl era with at least 225 rushing yards in five straight games.

The Bears were sailing along with a 24-10 lead early in the fourth quarter when the Lions scored two quick touchdowns.

D'Andre Swift scored from the 9 to cap a four-play drive that was aided by three Bears penalties, including one that wiped out an interception by Jack Sanborn deep in Chicago territory.

The Lions then tied it at 24-all when Fields overthrew a covered Kmet, and Okudah returned the interception 20 yards for a score. Fields, who had a dazzling 61-yard touchdown run against Miami the previous week, then made up for it when he went untouched for a 67-yard score.

Lions: S DeShon Elliott (concussion protocol) left after he was hurt trying to tackle Fields as he crossed the goal line on his touchdown run at the end of the first half.

LB Julian Okwara (knee) and DL Josh Paschal (knee) were hurt in the first half.