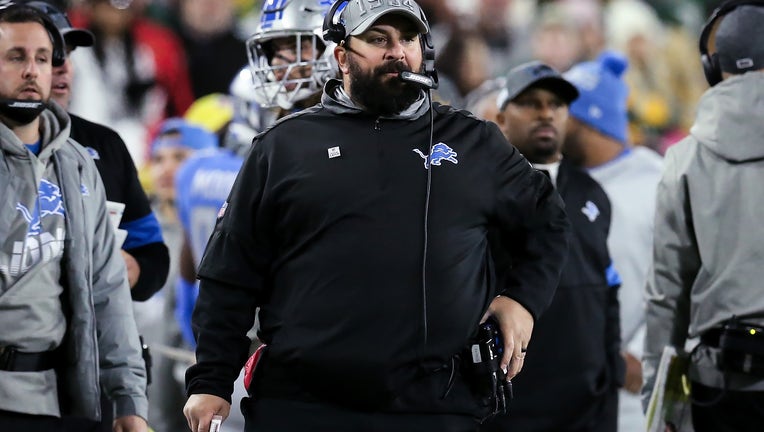 DETROIT - Matt Patricia was diplomatic, pointing out the obvious: Yes, there were a handful of ways the Detroit Lions could have played better at Green Bay.

Then Patricia was asked what he'd say to Detroit fans who are still fuming over some questionable calls that cost the Lions dearly toward the end of their loss to the Packers.

That was as close as Patricia came to capturing the emotions felt by Lions fans after Monday night's 23-22 loss. It's always a fine line for a coach to walk after being on the wrong end of some tough calls by the officials. Say nothing, and your fans - and players - might think you aren't sticking up for them. But if you spend too much time dwelling on the previous game's calls, it can push the attention away from deficiencies that the team can and should try to improve.

"You need to control what you can control on the football field," Patricia said. "If you do that, then you won't put yourself in those situations."

The Lions actually had put themselves in a pretty good situation in the fourth quarter. They led 22-13 and had the Packers on the ropes when a hands-to-the-face penalty gave Green Bay a first down. The Packers scored a touchdown soon after that, and they later got the ball back and drove for the winning field goal.

Green Bay would have had to try that field goal earlier - and from farther out - if not for another hands-to-the-face call on Detroit. The first down from that penalty allowed the Packers to run the clock all the way down before kicking, denying the Lions a chance to get the ball back.

Both calls were against Detroit defensive end Trey Flowers.

TV personalities and social media users alike were critical of the calls - but no amount of sympathy from third parties will change the fact that the Lions (2-2-1) are now in last place in the NFC North, and this loss made their path to a postseason berth a little bit harder.

"Certainly, football is an emotional game and that's why we love it so much, and the passion. People put a lot into their work that they put out on the field, so emotions are going to be high," Patricia said. "Certainly, you get away from the game and you get a better chance to take a look at it and think about the game in a manner that is a little bit more strategic, and how you could have done some things better. We'll approach it that way and we'll get those fixed. We're turning the page."

The Lions made big plays on special teams. Matt Prater made five field goals, including kicks of 51 and 54 yards in the second half. Detroit also recovered a Green Bay fumble on a punt in the third quarter.

The Lions had problems in the red zone for a second straight game. While they didn't fumble the ball away like they did in their previous game against Kansas City, the Lions settled for short field goals twice early on and only scored one touchdown in the game.

Defensive back Justin Coleman has been a nice addition for the Lions this year, and his interception near the Detroit goal line early in the fourth quarter nearly helped the Lions hold on.

The offensive line couldn't impose its will. Green Bay had three sacks, and the Lions averaged only 2.8 yards per rush.

The Lions were without DT Mike Daniels, who was inactive with a foot injury.

175 - The number of yards of offense for the Lions, not counting passes of 66 yards to Kenny Golladay and 58 yards to Marvin Hall early in the first quarter. Those two passes helped Detroit to a 10-0 lead, but the Lions had a hard time sustaining drives after that.

It's another crucial NFC North matchup for Detroit, which hosts Minnesota on Sunday.