While saying another 139-game start streak would be "a long one," Matthew Stafford hopes to get back on the field as quickly as possible.

The Lions quarterback knew Saturday night that he would not start Sunday's game in Chicago but held out hope until the morning of that day he would dress despite a back and hip injury.

"It's tough. I love playing this game," Stafford said Monday. "I work really hard to be out there for my teammates and wasn't able to do it.

"It was a tough pill to swallow."

Jeff Driskel relieved Stafford as the Lions lost 20-13 in Chicago. He was 27 of 46 for 269 yards, one touchdown and one interception. 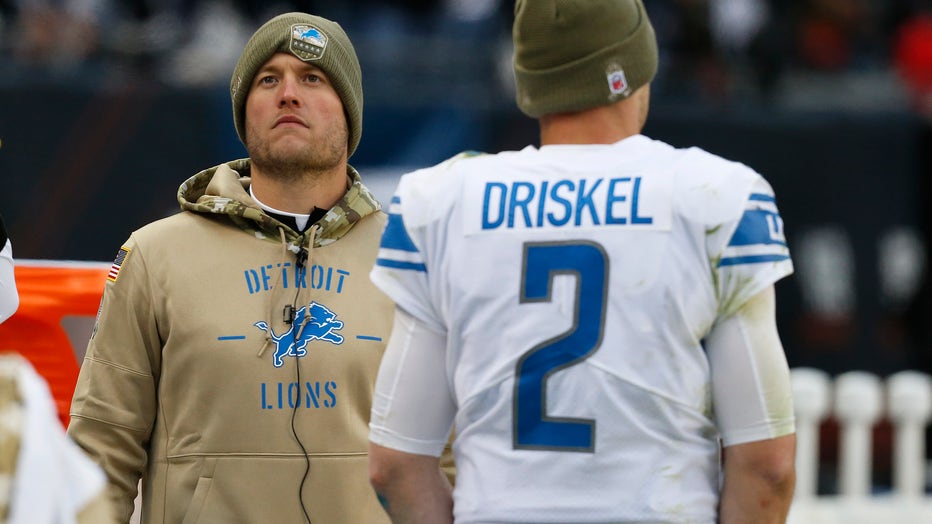 CHICAGO, ILLINOIS - NOVEMBER 10: Matthew Stafford #9 of the Detroit Lions and Jeff Driskel #2 talk near the bench during the game against the Chicago Bears at Soldier Field on November 10, 2019 in Chicago, Illinois. (Photo by Nuccio DiNuzzo/Getty Ima

Stafford and coach Matt Patricia said the quarterback's availability would be a day-to-day, week-to-week decision moving forward for the Lions (3-5-1), who host Dallas on Sunday.

Patricia said scans on Stafford's back Friday showed an injury that he would likely not be able to play with. Patricia said the team extended Saturday's walkthrough to get Driskel more reps.

The team was informed Saturday that Stafford might not be able to play, but Stafford held out hope that he might be able to dress.

"Knowing Matthew Stafford, he wants to play," Patricia said Monday. "He's extremely tough, he's extremely competitive. And honestly, we spent most of Saturday trying to figure out way, if there was a way, for him to play safely."

Stafford was in a hooded sweatshirt and helped coax Driskel as much as he could on game day, admitting the first Lions game since 2011 without him starting was a strange one.

"It was an odd feeling," Stafford said. "I was probably in one of the weirder places mentally than I've been in a long time watching that game. Just trying to pull for the guys, and obviously it was a close game down to the wire. I was just hoping we could come away with it."

The offensive line responded strongly to the challenge of the Bears tough defensive front.

If Driskel is the guy going forward, offensive coordinator Darrell Bevell might need to open the playbook to play to his backup's strengths.

Driskel threw a bad interception in the third quarter to linebacker Nick Kwiatkowski and connected with wide receivers Kenny Golladay and Marvin Jones for eight receptions, tied for second-to-last this season for their combined output.

"Certainly, there are some plays out there that we would like to have back in those situations, but I thought he handled the situation really well," Patricia said. "I thought he tried to do everything he could to help the offense."

Linebacker Jarrad Davis played his least amount of snaps on the season but may have had his best game.

In a linebacker rotation with rookie Jahlani Tavai and others, Davis played a season-low 77 percent of snaps, but looked more comfortable against the run with eight tackles.

"It was something that we had kind of scripted through the game of like, 'Hey, we're going to give certain guys rest during these series and roll them in and out,'" Patricia said. "I think from that standpoint, some of those rotational type of series, I thought they helped."

Despite being drafted No. 8 overall, tight end T.J. Hockenson still has not been a big part of the offense.

After catching six passes for 131 yards in Week 1 against Arizona, Hockenson has averaged 2.4 receptions and 26.5 receiving yards per game with one total touchdown.

On Sunday with a backup quarterback throwing short passes, Hockenson had three catches for 47 yards.

There's a bunch for Detroit, with Wagner and running back Ty Johnson joining linebacker Miles Killebrew in the concussion protocol, Patricia said.

5-15: Detroit's record without Stafford at the helm throughout his career.

Since Stafford was drafted first overall in 2009, the Lions have been without him for 20 games, including Sunday's loss. They went 0-6 without him during his rookie season, then 5-8 with Shaun Hill and Drew Stanton in Year 2.

The Lions haven't had to deal with that since 2011, but the early returns suggest this time it wouldn't be pretty this time either.

The Lions need to find a way to beat divisional foes, starting the season 0-3 against the NFC North. One game each awaits with Chicago, Minnesota and Green Bay, with Dallas and Washington up next before a Thanksgiving rematch with the Bears.